A fine digest of Calexico in a handsome, limited edition box set... 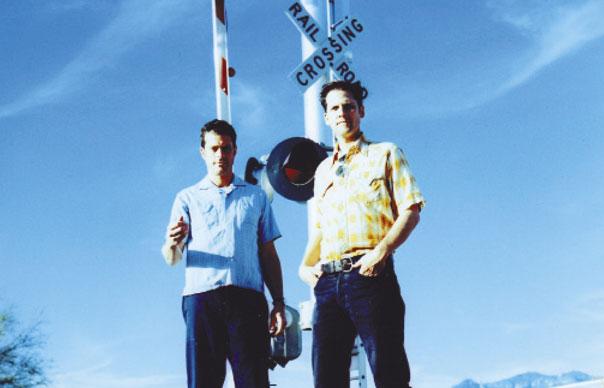 A fine digest of Calexico in a handsome, limited edition box set…

Fifteen years into their career, we have an idea what Calexico are supposed to sound like. Broadly, you may expect desert dust, a bit of Ennio Morricone twang, occasional trumpets. Since the group is headquartered in Arizona, we may employ critical shorthand to signpost these expectations: desert rock doesn’t quite do it, so let’s settle for “Southwestern soundscapes”.

And it’s true, on most of their records, the musical collective which has coalesced around Joey Burns and John Convertino will deliver something to fit that template. But, more often than not, their music will explore uncharted territories. Yes, there will be a hint of Sergio Leone carried on the hot, dry air, and the lyrics may be specific to the troubled terrain which connects the US to Mexico, but the essence of the songs will be broader. To extend the film metaphor – Calexico don’t really sound like a spaghetti western; their songs are John Sayles micro-dramas, examining the politics of emigration and borderlands on a human scale, finding the universal in the particular. (With occasional twang.)

But away from their official releases, there is another Calexico. The group’s ‘tour only’ albums are sold at gigs, and showcase a more playful, experimental side to their creativity. There are eight albums in all, and they have now been collected in a handsome, limited edition, 12 x LP box set called Road Atlas. Two of these are live sets, and there are six albums of original material. Some of these are very fine indeed; Travellal (from 2000) is a beautifully evocative, ambient jazz album, in which Calexico make a sideways nod to Charles Mingus (a native of Nogales, on the Arizona border); and the soundtrack from Aaron Schock’s Mexican circus documentary Circo (from 2010) makes effective use of their cinematic sense of atmosphere.

For those who are nervous of investing in the box, the tour albums are available individually on the Touch & Go/Quarterstick website) but, short of that, Selections is well-curated compilation which stands comparison with any of the band’s official label releases. Those in search of the twang will be reassured by “Glowing Heart of The World” (from 98-99 Road Map), which is almost like a re-imagined “Ghost Riders In The Sky”, starting gently, and cantering into a western melody that couldn’t be more Morricone if it featured Eli Wallach on maracas. There’s some lovely slide guitar on ‘El Morro’ (from 98-99 Road Map), a dusty desert instrumental which channels Ry Cooder. And “Waitomo” (from 2007’s Tool Box) has some of the instrumental snap Burns and Convertino first located on their pre-Calexico lounge band, Friends of Dean Martinez.

Then there is their beautiful re-styling of “All The Pretty Horses” (from 2001’s Aerocalexico), which adds campfire melodies and some eerie steel guitar to the children’s lullaby, making it bleaker than it has any right to be (buried beneath the sweetness of Burns’ singing is a line about a poor little child having its eyes pecked out by bees and flies). Also from Aerocalexico is the original version of “Crystal Frontier”, delivered here with greater percussive spring, and outer space sound effects. Sadder yet is “Gift X-Change”, an existential Christmas song seemingly-fashioned from an old Scottish lament. “I trust you’ll find some inner peace through times that are rough,” sings Burns, sounding far from convinced.

But it’s the more marginal pieces which make Selections work as an album. “Entrenando A Los Tigres” is little more than a percussive sketch, but is jammed with atmosphere. “Inch by Inch” is like a Neil Young blues, condensed into a minute. And “Boletos” is 90 seconds of Top Cat jazz, with taco seasoning. If that sounds fragmented, it isn’t. In another life, not entirely dissimilar to this one, Calexico would be a jazz band. In this life, they make the music that leaks through the walls of abandoned motels. It is majestic music; sometimes futuristic, often traditional. It’s a soundtrack for now, which accounts for the tears.
Alastair McKay

Q&A with Joey Burns
What is the idea behind the Tour Only albums?
“They were our way to give something back to the fans at our concerts. Hopefully they give another perspective to our identity. So we experimented a lot, and mashed the lo-fi recordings together with proper studio recordings as well as instrumentals and songs. There are no rules to the construction of our Tour Only albums.”

How does the material differ stylistically from your official releases?
The Tour Only material seems to lean more on the spontaneous and dares to be as different as we can make it within our general sense of style and aesthetic. I guess we do have some limits, but at the same time there are some huge leaps here and there.

When can we expect new material from Calexico – and what will it be like?
We are setting our sights on releasing a new Calexico record in 2012 to help ramp up to the celebration of the Mayan calendar’s changing of the guard. The world news has been so bizarre and crazy that I have become a full-on news junkie, tuning in my radio dial to the 7am broadcasts.
INTERVIEW: ALASTAIR McKAY