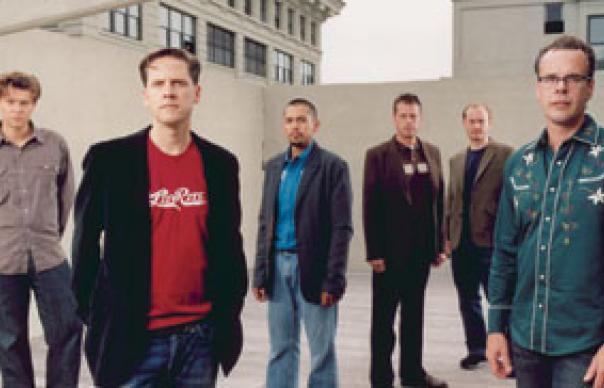 While their spiritual kinsmen Wilco and Radiohead have continued to hurtle toward the outer limits, Tucson’s Calexico have been cruising in the other direction, increasingly mixing traditional songcraft with the avant-garde pieces that put them on the indie-rock map. Core members Joey Burns and John Convertino managed to put these disparate impulses into perfect balance on the milestone 2003 album Feast Of Wire, juxtaposing free-form instrumentals like “The Root And The Canal” with verse/chorus constructions like the sublime “Quattro”.

And now, on the proper follow-up to Feast…, Calexico have completed their formal journey. Garden Ruin is an album likely to polarise their fans, inasmuch as it contains nothing but discreet songs. On the 11 tracks, Burns reveals himself to be a student of the California classics as he echoes Gram Parsons, Neil Young and Lindsey Buckingham, among other quirky songsmiths.

The album opens with “Cruel,” a sociopolitical lament (“Future’s left to wallow in fortune’s waste”) that adheres to standard song structures but nonetheless manages to pack into its four minutes virtually every element in Calexico’s inclusive style — the sinewy rhythmic base, the instrumental filigree, the Latin brass, Burns’ impressionistic lyrics and troubadour-next-door vocals. That sets the template for the album, as the players accent each song with the signature strokes and hues of their evocative sound-paintings. On “Panic Open String”, for example, ambient glockenspiel plinks and forlorn Casio organ tones glimmer like fireflies around desolate images of “propeller power fields” and a “solar panel side.”

What Garden Ruin is short of is Convertino’s burly but wonderfully articulated stick work, which up to now has been as crucial to Calexico’s character as Burns’ tremulous tenor. It’s a real kick in the pants when the drummer rolls up his sleeves and thunders away on the band’s first flat-out rockers, the garage-y “Letter to Bowie Knife” and the Rumours-style “Deep Down”—indicating this is one classic move they may want to explore further. There’s nothing here as stunning as “Quattro”. Still, Burns and Convertino prove they can play it relatively straight, without sacrificing Calexico’s hard-earned status as a band that matters.