After a mystifying diversion, Arizona duo return (in part) to familiar, dusty territory 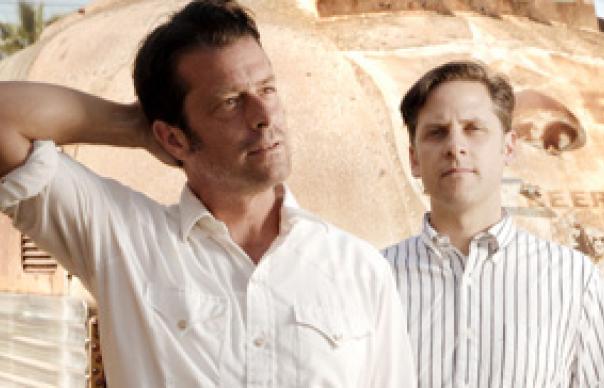 Joey Burns and John Convertino don’t quite explain it this way, but their last album, Garden Ruin was, if not a mistake, at least a misstep. By putting themselves at the mercy of producer JD Foster – the twanging bass in the Bakersfield sound of Dwight Yoakam – the Tucson-based group signed up for a process of genetic modification. They didn’t sound like themselves. Where were the spaghetti-western flourishes, the Ring Of Fire horns, the Link Wray rhythms? They were packed away, hidden beneath a blanket of folk prissiness. It wasn’t bad exactly; there was still poetry in the lyrics, many of them raging against the brutal carelessness of the Bush junta; and in the haunting French language number, Non De Plume, they delivered an unlikely hybrid of a different stripe: the song was like Serge Gainsbourg scoring The Third Man through a fug of Gitanes.

But on the whole, Garden Ruin was a disappointment, particularly after the rich pleasures of Feast Of Wire. Under Foster’s tutelage, they sounded like a folk-rock group searching for an umbrella in an electrical storm. Such politeness was shocking. Calexico weren’t Calexico.
Burns and Convertino talk diplomatically about the lessons they learned with Garden Ruin. It was about streamlining the sound, they argue, and perhaps the duo did need a break from overseeing every aspect of the music. In the meantime, Calexico brought their aesthetic to bear in other ways, collaborating with (among others) Richmond Fontaine and Roger McGuinn, as well as less celebrated acts such as Amparanoia and Spanish guitarist Jairo Zavala’s group Depedro. (Zavala’s guitar adds new colours here.)

The good news is that Carried To Dust marks a return to form. There’s no bold declaration of intent: this is a subtle record which imposes itself slowly. But on the first few listens, it becomes obvious that Burns and Convertino have rediscovered their mojo. The instrumental, Trigger (Revisited) is purest Calexico, a fresh surf of Morricone stylings that is brisk and cinematic. It is A Fistful Of Dollars condensed into three action-packed minutes. Convertino’s bustling rhythms sound like horses galloping through dust, and it’s impossible to listen to the tune without conjuring images of reticent gunslingers in high noon shootouts. When the whistling starts, the mood is complete. You know how I ordered three coffins, Mr Undertaker? Better make it four.

Inspiracion is another sign that we’re back in Calexico country. The group are named after a border town: this Spanish song is located South of the border, down Mexico way. It’s evocative stuff; a plaintive trumpet sounding above a shuffling dance rhythm. The song would fit happily on Ry Cooder’s Chavez Ravine, but it’s not as traditional as it sounds. Take away the horn, and listen instead to the beat: the wheezes and clicks of the tune are closer to Tom Waits than they are to mariachi music. But Calexico employ their weirdness economically. Everything is done in the service of the song, as Amparanoia’s Amparo Sanchez and trumpet player Jacob Valenzuela waltz through a romantic duet that is ripe with regret.

So far, so reassuring. But listen again to the album and it quickly becomes apparent that Calexico have not fallen into their old ways. This is not a retread of Feast of Wire, but a consolidation of their restless spirit. Burns and Convertino may have encouraged the notion of their band as desert troubadours, but they began life as a lounge act playing Dean Martin covers, and have always displayed an interest in travelling off-map. Calexico have always resisted categorisation, but they represent Americana in its broadest sense; as a place where the declamations of film soundtracks collide with the brusque immediacy of traditional folk forms, sometimes wandering onto the lower slopes of jazz.

With such aural invention going on, it’s easy to forget the words, not least because Burns sings them in a manner that is as unobtrusive as his lyrics are sparsely poetic. Carried To Dust is a less obviously polemical record than Garden Ruin, but if Burns is not railing against Bush, he’s still in a dislocated mood, placing stateless refugees – or possibly spies – on barren landscapes in “Two Silver Trees” (inspired, apparently, by the poet Norman Dubie), and going fully post-apocalyptic on “Man Made Lake”, which conjures a Twilight Zone world of submerged streets and cellphone trees.
In the press notes for the album, Burns suggests an overarching narrative, based on a character who finds himself without work during the Hollywood writers’ strike, and takes a road trip. That’s certainly the subject of the mysterious Writers’ Minor Holiday, but it would be a stretch to suggest that the concept extends across the whole record.

If anything, the songs come from Burns’ travel journal, not least a trip to South America. He was inspired by a visit to La Chascona, the Santiago home of poet Pablo Neruda, and a restorative visit to Valparaiso.
The Chilean trip surfaces in the opening track, Victor Jara’s Hands – which namechecks the poet murdered by Pinochet, whose name lived on as a symbol of artistic bravery and inspiration – and “House Of Valparaiso” (with Sam Beam on misty backing vocals), which suggests the fearful flight of refugees from an oppressive regime. Both Burns and Convertino are aware that the imagery of the sea washes across Carried To Dust, and Burns uses it in his songs to represent a sense of longing, and the promise of fresh horizons. “Red Blooms”, travels furthest, being a wistful reflection on Russian “snowdrops” – those poor souls who fall down drunk in the snow, and aren’t found until spring. If you consider that Burns considers this to be an optimistic image, you’ll appreciate that his worldview still tends towards bleakness.

So, Calexico are back, but this time they’re travelling all over the map. Carried to Dust is a quietly persuasive record. Ironically, its strongest moment comes when they stay closest to home, on the gorgeous country duet “Slowness”. Pieta Brown adds a beautifully plaintive vocal to a song which plays out like a perfect moment, fondly remembered.