Tense one-man thriller. Set in a coffin in Iraq... 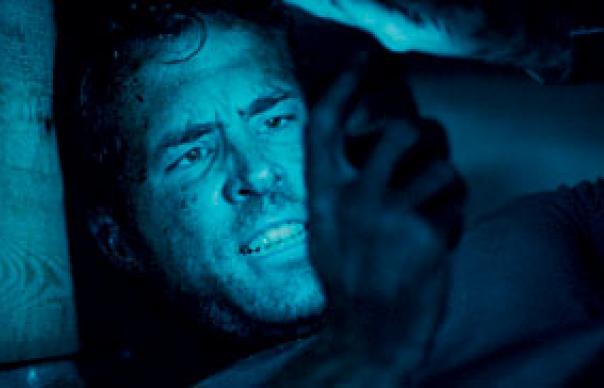 Buried takes place solely in the darkened confines of a wooden coffin six feet below ground somewhere in Iraq. There are no cutaways, no flashbacks or split-screen; we see nothing, in other words, beyond the confines of the coffin. It is, you might think, the USP of Spanish director Rodrigo Cortés’ film, but in truth the one-location set-up has become a pet device of low-budget filmmakers lately. Much of Hard Candy, for instance, occurred in the house of a suspected murder, the first Saw movie took place in a dilapidated bathroom, and last year, Duncan Jones located his brilliant debut, Moon, almost entirely inside a lunar base.

But Cortés has loftier ambitions for his thriller. He’s harking back to the ingenious experimental films of Alfred Hitchcock like Rope – shot in a single Manhattan apartment in one take – and Lifeboat – shot in a boat at sea, in real time. To compare Cortés to Hitchcock may seem grand, but certainly echoes of his style, technical trickery and most of all his mischief are definitely in place here.

Cortés is helped no end by Ryan Reynolds, his one on-screen cast member. When the movie starts, in the pitch dark, we’re right there with him as he screams, shouts and struggles. After what seems like an eternity in this awful blackness, the story kicks in. Reynolds has a lighter in his pocket, and he finds a mobile phone in the box. Via a series of agonising phone calls – to his wife, his boss, the CIA – we find out he is Paul Conroy, a private security worker, who has been kidnapped, drugged and buried alive. Unless the US government stumps up a $2 million ransom, Conroy will indeed die in the coffin.

So, will he or won’t he? This is the issue Cortés manipulates the most skilfully. He piles on Conroy’s frustration, fear and anger, ramping the tension up to a ridiculous degree (the camerawork here is tremendous, and there’s plenty of ‘how on earth did he shoot that?’ questions to mull over). The film lingers too long in places, and the credit sequence is an almost comically over-extended prelude, complete with a thunderous theme that makes Cape Fear’s seem jaunty by comparison. But the longueurs won’t be remembered. Cortés’ film is electrifying stuff, and its refusal to provide a cop-out ending is commendable.

Indeed, the most unbelievable part of the whole film is quite how Conroy manages to get such excellent reception on his mobile phone from six feet underground. You can barely get a decent signal in central London.
Damon Wise