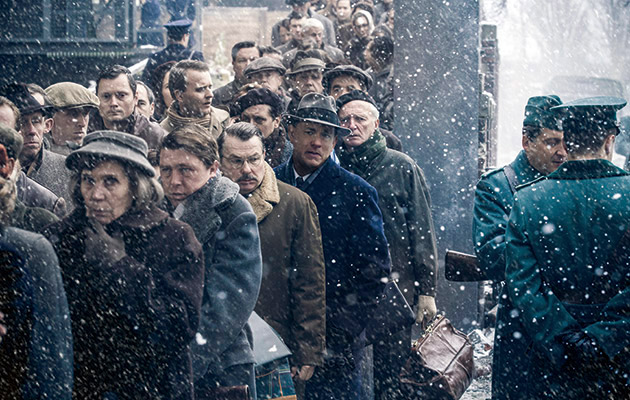 Steven Spielberg was 11 years old in 1957, roughly the same age as Roger – a young boy in Bridge Of Spies whose fertile imagination is fired by public service broadcasts instructing viewers on tips to survive a nuclear attack. While Roger is busy filling the bath to conserve water, his father is closer to the heart of the Cold War than perhaps he’d like. Played by Tom Hanks, James B Donovan is a partner in a New York law firm who is assigned to represent Rudolph Abel (Mark Rylance), a Russian spy who faces the death penalty if found guilty. The first half of Spielberg’s Bridge Of Spies slyly plays Hanks’ show and tell against the more nuanced Rylance, an actor who inhabits rather than exhibits.

Hanks’ Donovan represents the film’s James Stewart-style moral centre – a man doing his job, who believes in due process, even if the windows in his living room are shot out. He finds himself warming to Abel, while the rest of the judicial community – and America, in general – believe he should be strung up. The second half of the film, meanwhile, shifts a gear. Following the downing over Soviet airspace of U2 pilot Francis Gary Powers, the incarcerated Abel suddenly becomes a valuable commodity, and Donovan is dispatched to wintry Berlin to arrange an exchange: Abel for Powers. Berlin, we learn, is “a complicated place” and the film slowly drifts away from Hollywood classicism into muddier waters more suited to a LeCarre story – or, perhaps, Munich, which remains Spielberg’s most dark, conflicted film.

Late in Bridge Of Spies, Donovan laments, “There’s a lot of fictions going on.” For a filmmaker usually as unambiguous as Spielberg, it’s surprising that the thrust of Bridge Of Spies is fictions. Abel’s fictional cover, the fiction behind the US government’s covert methods of gathering information, the fictions Powers reveals under interrogation, the fictions played out by Russian and GDR representatives during their negotiations with Donovan. And, indeed, Donovan’s own fictions – as his Berlin conversations play out, he is revealed as being a shrewd fixer. It’s interesting that the Coen brothers worked on the script for Bridge Of Spies: their presence seems particularly strong on the Berlin sequences, which feature a handful of Coensy grotesques, but also in blurring between truth and fiction, a kind of mischievous game of bluff they excel at. It’s one of Spielberg’s best – anchored by solid work from Hanks but given grace and wit by Rylance. “I’m not afraid to die,” says Abel. “Although it wouldn’t be my first choice.”