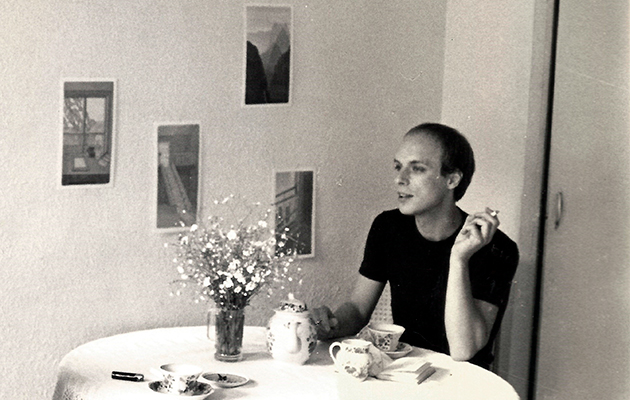 The world of muzak has changed immeasurably since the ’70s. Offensively bland music is rarely heard in public spaces, and even the brand name itself was retired in 2013; instead, the issue is now intrusively mastered pop, perfect for being blasted out of phones on public transport or, in the infamous ongoing case of Jess Glynne’s “Hold My Hand”, maddeningly repeated multiple times on a certain airline’s every flight.

Our environments are noisier than ever, then, which means escape into the reflective spaces provided by Brian Eno’s early ambient works is more necessary than when he first created them. By design, then, or by chance, Eno’s first four ambient records are now being reissued, mastered at half-speed and split across double LPs (singles are also available) for superior sound quality; this same process so benefitted Eno’s first four vocal albums on their vinyl reissue last year.

The story goes that Eno was inspired to first create unobtrusive, environmental music after hearing an album of harp pieces, partly drowned out by the sound of rain, while recovering from a car accident and thus unable to turn up the stereo. But he’d already ventured into this world with (No Pussyfooting), his 1973 collaboration with Robert Fripp, and the first LP he released after leaving Roxy Music earlier that year. Discreet Music slipped out quietly a couple of months after his third “pop” album, 1975’s Another Green World; one of four LPs that Eno’s Obscure label released on the same day, its second side featured an orchestral collaboration with Gavin Bryars queasily reworking Pachelbel’s ‘Canon’, while Side One showcased “Discreet Music” itself, a 30-minute piece that consisted purely of Eno’s VCS3 synth slowly looped through two tape machines – not much happens, but beautifully. David Bowie, of course, took notice.

Of all Eno’s ambient works, except perhaps 1993’s Neroli, Discreet Music stays closest to his original concept of a subtle music designed to alter the listener’s environment. The rest of his ambient records are lusher, especially 1978’s Ambient 1: Music For Airports: a reaction to the muzak in Cologne airport, and recorded just a year or so after Eno’s collaborations with Bowie, Cluster and Harmonia, it remains a feather-light masterpiece, its intersecting loops of bucolic piano (by Robert Wyatt), flowing synth tones and processed vocals as impressive as the finest filigree.

Along with the other LPs in the Ambient series, Music For Airports’ cover is adorned with detail from a map, which is a crucial clue to Eno’s intentions. As with a map, the idea of these records being purely functional is in fact a little off; after all, cartographers tell a story through their inclusions and exclusions, rendering every map partway between the useful and the beautiful, just like Eno’s ambient work. These records are also imbued with a sense of place, none more so than 1982’s Ambient 4: On Land, more pioneering illbient than relaxation tape. Most of its eight tracks are named after places, some from Eno’s childhood, including “Lantern Marsh” and “Unfamiliar Wind (Leeks Hills)”, and they reverberate with low drones, swampy synth pads and disquieting field recordings. At times it’s as if the listener is lost in East Anglian fog, desperately trying to locate civilisation via the tolling of a muffled church bell.

The remaining LP, Music For Films, is more of an outlier here, being a collection of miniatures designed to show off Eno’s work to music supervisors. Phil Collins, Fred Frith, Robert Fripp and Dave Mattacks all appear, and there are some vivid moments – the melodramatic “Slow Water”, the limpid “Strange Light” – but the overall effect is of a less cohesive Another Green World.

Viewed from 2018, these four LPs appear to have inspired swathes of innovative music in the past 40 years – from Bowie to Boards Of Canada – but they’ve also led in part to the soporific, neo-classical mulch that clogs up myriad Spotify ‘chill-out’ playlists. Much of this streamed music is purely functional – music for sleeping, say, or music for pressure-washing – and acts as little more than beige wallpaper, useful only to block out unwelcome thoughts or the hum of distant traffic. In comparison, these four Eno records are like William Morris designs, ornately wrought and continually fascinating.

This is the best they’ve ever sounded too – compared with the original pressing. On Land’s “Lizard Point”, for instance, is louder and bassier and feels like a living 3D landscape compared to the flatter first master. For music so detailed, these new versions are worth the expense. “Ambient Music must be able to accommodate many levels of listening attention without enforcing one in particular,” Eno concluded in his original sleevenotes for Music For Airports. “It must be as ignorable as it is interesting.” Judged on that first criteria, then, these LPs fail, for they’re far too beautiful to just float by, overlooked. This is music to help you temporarily transcend the physical world, not just soundtrack it.