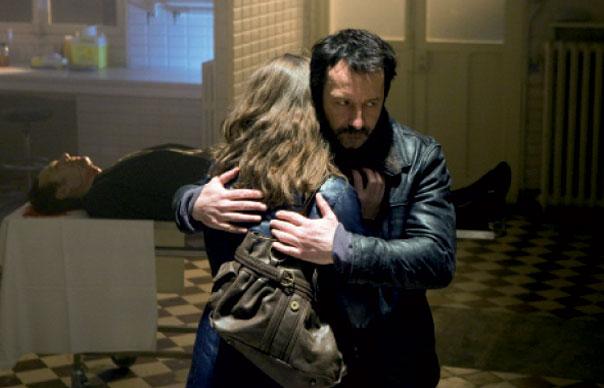 The concept of good-cop/bad-cop has been a screen staple since the days of film noir, but is a little too tidy for today’s tastes. Today’s most effective yet morally dubious crime fighters, in series like The Wire and The Shield (this French thriller’s obvious ancestors), inhabit a brutal world where lines are blurred at the click of a handgun’s safety catch; this is the age of bad-cop/really-bad-cop.

Braquo, French slang for “heist”, focuses on a crack Parisian unit based in what looks like a run-down garage with their own in-house bar. Led by Eddy Caplan (Jean-Hugues Anglade, perhaps best known to British viewers from Betty Blue and Killing Zoe), their methods are anything but by-the-book. In the first few episodes (broadcast by the FX channel late last year) they get their hands dirty by stabbing a rape suspect in the eye with a pen, blackmail a seedy lawyer caught with a dominatrix, kidnap and accidentally kill a prisoner and then destroy the evidence by setting fire to the corpse, and gun down two mobsters, triggering an all-out underworld war. When one of their own is taken hostage, threatening to expose the team’s myriad wrongdoings, they’re forced to stage a daring robbery to raise the cash for his release.

Filmed in stark blues and greys, it’s a relentless catalogue of violence and misery, but not at the expense of character development. Director Olivier Marchal (like The Wire co-creator Ed Burns, a former cop himself) quickly establishes fully-rounded personalities; Eddy is at the centre of an Internal Affairs corruption probe, fabricating alibis and fudging paperwork, while his trusty lieutenants are plagued by, among other things, spiralling drug habits, gambling debts, borderline psychotic spouses and attacks of conscience about the squad’s hard-boiled tactics.
“What shit have you got yourselves into this time?” asks a more law-abiding officer at one stage. Eddy doesn’t offer a reply, but soldiers on as the shit gets ever deeper.
EXTRAS: None.
Terry Staunton