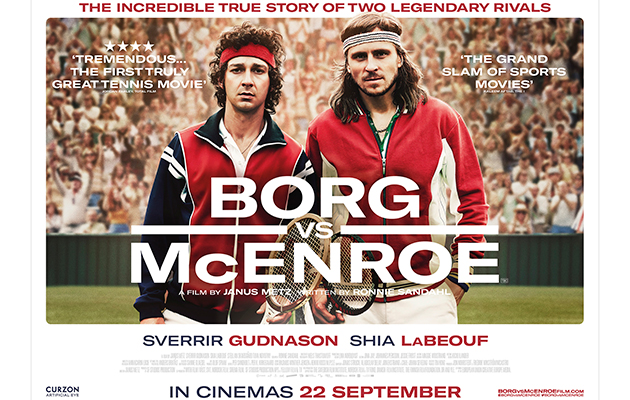 The on-court Sturm und Drang of Bjorn Borg and John McEnroe has already been the subject of one HBO documentary. Now, Danish director Janus Metz has assembled a staunch biopic about the two Wimbledon champions that owes a debt to Rush, a film that dramatised another real-life international sporting rivalry, between James Hunt and Niki Lauda. The focus is build up to the 1980 Wimbledon final – between “the baseline player and the net rusher” – when a television audience of 17.3 million viewers watched Borg chase his fifth straight title on Centre Court.

Newcomer Sverrir Gudnason plays the Swede as a stoic, dedicated athlete who is uncomfortable being recognised walking down the street. Shia LaBoeuf, meanwhile, is the temperamental McEnroe. The narrative leans heavily on their contrasting dispositions – scenes of McEnroe partying are cut against Borg in his hotel room, diligently measuring his pulse rate. The further McEnroe progresses through the tournament, the more enraged he becomes by the media focus on his behaviour, while Borg increasingly shuts himself down, wrestling to keep an unspoken anxiety in check. “Can’t you just talk about the tennis?” Says an exasperated MacEnroe; can’t Borg just talk at all?

Sports commentators act as a kind of Greek chorus, filling in exposition as required (“McEnroe is the bigger talent, but playing Borg is like being hit by a sledgehammer”), allowing Gudnason and LaBoeuf to get on with more actorly work. Gudnason is good as the enigmatic Bjorg, eventually making an introverted, enigmatic character likeable. LaBoeuf has been enjoyably unhinged in films lately – American Honey – and he chews his way greedily through McEnroe, savouring every unpredictable tic, cuss and hissy fit.