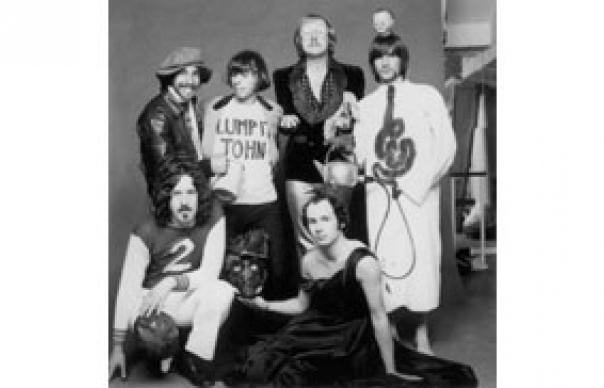 All issued by EMI Catalogue Marketing

Amiably reunited in 2006, the Bonzo Dog Doo-Dah Band tend to kindle a warm glow in the heart and inspire faintly patronising talk of “quintessential English eccentrics”, as though Aggers and CMJ from Test Match Special have picked up tubas and gone on tour with Brian Sewell. In reality, the comedic bandwidth of the Bonzos’ recorded output (1966–72) defies easy analysis or categorisation. Neil Innes’ misty-eyed whimsy shared the spotlight with body-function belly-laughs. Farmyard animals and trouser presses were as integral to the work as Vivian Stanshall’s meticulous vernaculars. Surrealist? Slapstick? Satire? Or were the Bonzos an ‘L’ band – strictly lunacy, language and life?

Their five albums, all reissued here with extra tracks, achieved at their best a fully interdependent relationship between music and comedy. You hear it on The Doughnut In Granny’s Greenhouse, where Innes’ instantly appealing rock riff (“Rockaliser Baby”) is interrupted by an angry policeman, then by Stanshall talking about an electric iron, and finally by Stanshall as a leaden-voiced northerner complaining about Bournemouth. Laugh-aloud funny, for sure, but musically groovy too. You could file it next to Python, or alongside The Move.

Gorilla (1967), recorded before the Bonzos went totally electric, is the place to start. A cynical dissection of a Britain under the grip of polka-dot fashions and The Sound Of Music, it’s dominated by Stanshall as MC, story-teller and crooner. As each song pipes up, Stanshall dons a new mantle: Edwardian frivolity, showbiz insincerity, Establishment rectitude, Spillane-esque fantasy machismo. On “Cool Britannia”, he’s an upper-class twit singing in jive. On “The Intro And The Outro”, he introduces so many musicians (“… and looking very relaxed, Adolf Hitler on vibes”) that there’s no time left for a tune. On the sensational “Jazz, Delicious Hot, Disgusting Cold”, he’s part of a tone-deaf brass frontline performing an incompetent Dixieland rave-up.

The Bonzos had once been a novelty jazz act like The Temperance Seven, and Gorilla contains two examples of the exuberant 1920s and ’30s ditties they liked to play. “Jollity Farm” is pure gold, about a farm where the animals make peculiar noises (“grunt, howl, grunt, howl”) to show their happiness, while “Mickey’s Son And Daughter” celebrates the arrival of twins (“hooray, hooray”) in the Mickey Mouse household. The Gorilla bonus tracks give us five more of these delightfully silly numbers, recorded in 1966, including “Button Up Your Overcoat”, “Ali Baba’s Camel” (heartbreaking) and “I’m Gonna Bring A Watermelon To My Girl Tonight”.

The second album, The Doughnut In Granny’s Greenhouse (1968), is also recommended. Strikingly different to Gorilla, it takes a bird’s eye view of England in her suburbs and her seaside resorts, this time with psychedelic instruments and a proper rock production. “Postcard” and “Rhinocratic Oaths” are standout pieces in which Stanshall’s kaleidoscopic descriptions of the crushingly mundane (neighbours arguing about hedges; end-of-the-pier ennui; “fat sea cows with gorgonzola skin”) are refracted through Innes’ glittering melodic prisms.

It’s an ambitious and experimental album, from “We Are Normal” at one end (with its vox pops, musique concrete and rock-band-on-the-moon sonic attack) to “11 Mustachioed Daughters” at the other, where the hocus-pocus atmospheres rival Dr John. If the Bonzos ever made a Sgt Pepper, with no two tracks alike, this was it. Sadly, the bonus selections are nothing special, unless you need to hear them do “Blue Suede Shoes” or Cher’s “Bang Bang”, or “Mr Apollo” in mono.

Later in ’68 the Bonzos enjoyed their sole hit, “I’m The Urban Spaceman”, an Innes tune which appears on Tadpoles. Comprised mainly of material for the TV series Do Not Adjust Your Set, the album’s child-friendly yarns (“Hunting Tigers Out In ‘Indiah’”) and benevolent musclemen (“Mr Apollo”) see the Bonzos return to pre-Gorilla days of gaiety and good manners, and warm evenings ’neath the palm trees when the only sound was a swanee whistle (“Dr Jazz”) or “the humming of a melancholy coon” (“Tubas In The Moonlight”). The Tadpoles bonus tracks vary in quality, their clear highlight being Innes’ “Readymades”, a ghostly pop dream from the same school as The Casuals’ “Jesamine”.

Innes contributes several similarly wistful songs to Keynsham (1969), notably the title track, obviously interested in exploring serious, non-comedy directions. Stanshall, by contrast, seems distracted and diminished in stature. But on the occasions they write together, the results are superb. “The Bride Stripped Bare By The Batchelors” is an authentic account (“hot dogs on sale in foyer”) of the Bonzos’ adventures on the northern club circuit in the mid-’60s. “Busted”, the finale, is a pop surrealist singalong: “All together in the blood rush hour/Come on fish-face, you’ve got the power.” Among the bonuses are Stanshall’s (much later) version of “The Young Ones”, which he delivers like a drunk Peter O’Toole; and “Legs” Larry Smith’s infectious single “Witchai Tai To”, released under the terrible name Topo D. Bil.

Let’s Make Up And Be Friendly (1972), a contractual obligation album, is disappointingly patchy, marred by tedious surf-and-doowop spoofs in its first half. (An unreleased bonus, “Sofa Head”, is far superior.) But it does boast one classic. “Rawlinson End”, a Bonzos epic, opens with two minutes of Innes’ mockingly jaunty piano before mutating into a Stanshall monologue about the dark secrets of a family of unspeakable toffs. It’s beautifully written (“Mrs Radcliffe, still at table, straight-backed and cadaverous, poised over her sherry like a mantis…”), and remarkable to think that Stanshall, who sounds well into his fifties, was in fact only 28.