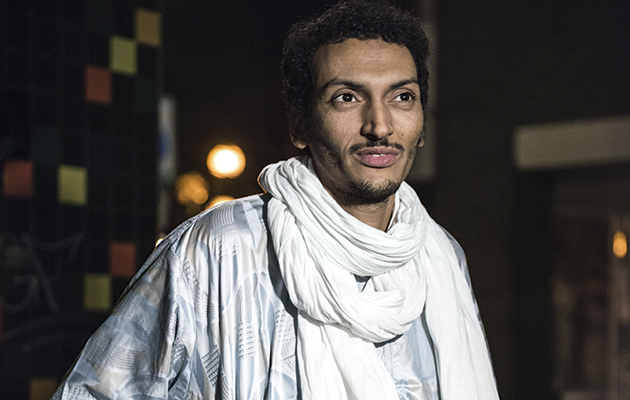 As a key voice in Tuareg music, Omara ‘Bombino’ Moctar carries a heavy weight, not that you would notice from the lightness he has traditionally brought to his songs. He first broke international cover thanks to the Sublime Frequencies label run by Alan Bishop of Sun City Girls – indeed, Bishop deserves greater recognition for his ongoing support of modern Tuareg rock, particularly through such series as Guitars From Agadez, of which Bombino’s debut album ‘proper’ was the second instalment.

While the romance afforded to Tuareg music belies a colonial impulse that tries to inscribe its specific tonal and rhythmic properties as a subset of the dreaded ‘world music’, there’s a lot more than generic constraint going on in the music of artists such as Bombino. It builds from specific structural conceits intrinsic to the Berber musical identity – there is not such a great leap from the call-and-response typical of Berber and Iberian song, and some of the rhythmic undertow isn’t too far from the spiralling percussives of Moroccan music.

The most recent wave of Tuareg music, though, politicised by uprising, has a feverish cast, something you can hear throughout Azel, even if Moctar’s voice weaves gently around the melodies, an instrument of grace skimming across the turbulent undercurrents of geopolitical address in some songs. It’s particularly pertinent given Adez’s introduction of his new, self-named sub-genre, ‘Tuareggae’, a development explored keenly by both the group and their producer, Dave Longstreth of the Dirty Projectors.

Moctar’s reasoning is fairly simple: “I love reggae music,” he states, “it makes me instantly happy… it is just another influence that has come into my music as it evolves in the same way that Western rock music mixes with Tuareg music in other songs that I play.” But it’s also clear enough to see another level – the meeting of two musics of protest, the eschatological fervour of reggae, chanting down Babylon, delivered on the graceful wings of dub’s pressurised production, meeting the gracious heart and tangled melodicism of Tuareg desert rock.

Throughout Azel, the combination of the two genres allows for an even greater sense of uplift and collectivism in a music that always carried the communal at its core. Moctar’s guitar playing is often the focal point of Azel – a limber guitarist, he rarely gives in to flights of fancy: while he can charm the instrument through curlicues of melodic invention, each riff tightly woven, he never gives in to any tendency to showboat. The end result is an approach to the guitar that lets the instrument breathe, even as it’s being wound around itself with rare physicality.

As with other Bombino albums, Azel often feels like an ever changing same. For some artists, this would suggest one-trick pony: for Bombino – much like Marc Bolan, oddly enough, whose vocal lilt Moctar strangely reminds of – each repetition has incremental power, resulting in a sum greater than the parts. But certain songs do stand out, such as the album’s centrepiece, “Iyat Ninhay/Jaguar (A Great Desert I Saw)”, a six-minute monster that maintains a paradoxical ‘laidback intensity’ that, these days, feels peculiar to Tuareg music. It also shifts effortlessly between sections, from a luxurious, extended introduction that lets riffs fall from the guitar strings, to a low-slung middle section, Moctar teasing out a Lissajous-figure solo, before accelerating to a fever-pitch finale.

The following “Igmayah Dum (My Lover)” has Moctar on the acoustic guitar, his introductory string-tangle reflective, drifting between notes before landing on a dime, the song pivoting on a pedal note that’s insistent in its restatement. It’s one of Moctar’s most gorgeous melodies, too, for the way it threads through the central riff. His playing here accesses a wild freedom even as it stays pinned to the ground by the song’s hypnotism: it reminds of one of his statements, in an interview with Bob Baker Fish, when asked what it means for Moctar to play guitar: “Freedom. That’s it. Pure freedom.”

In some ways, this second half of Azel is where Bombino’s elemental power really accrues. This is often the case with Tuareg rock – a music of cumulative force, it can take a little while for albums by Bombino, or peers like Tinariwen or Tamikrest, to work their magic. The hooks are there, though, waiting for the moment of enchantment to sink into the skin. By the time you’ve reached the penultimate song on Azel, “Timidiwa (Friendship)”, whose guitar tone is just the right side of rough and ready, Moctar’s songs have located the tightly wound spring at the core of Tuareg music.