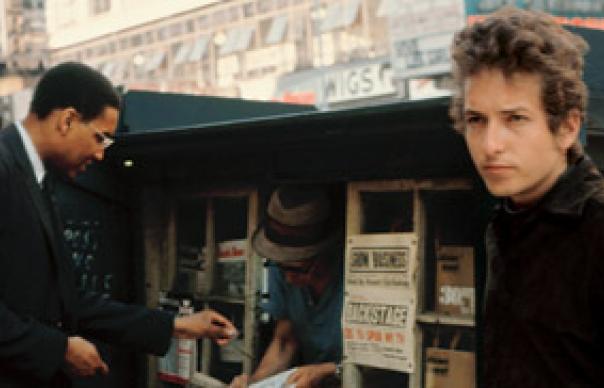 “Let’s just put this one down for kicks,” enthuses 22-year-old Bob Dylan, before letting out a couple of clumsy vocal hums and fumbling with the tuning of his guitar. Soon enough, he launches into one called “All Over You”, a ribald, biblical, rollin’ and tumblin’ hillbilly love song set to a cascading chain of imagery that ranges from slyly philosophical to patently absurd. “Well, if I had to do it all over again,” he hollers out, “babe I’d do it all over you.”

“All Over You”, evidently, wasn’t much more than a whim. Never considered for an album proper, nor (apparently) performed on stage, it was essentially just dropped off at Witmark’s New York publishing office in 1963, for posterity’s sake. Over time, it attracted a smattering of blink-and-you-miss-them cover versions (pop groups The McCoys and The Raiders, old Village friend Dave Van Ronk), none of which managed to rescue it from oblivion.

It’s a moment of levity, sharply at odds with Dylan’s serious 1963 public image, the young man scowling from the cover of his third LP, The Times They Are A-Changin’ – and one never intended for public consumption. But within Columbia’s 20-year effort to document, deconstruct, and redefine Bob Dylan with the Bootleg Series, it’s priceless.

As contrasted with album sessions or live performances, an entirely different aesthetic was at work with the material collected here. With the 47 tracks now collected as The Witmark Demos 1962-1964 (the album also contains the earlier, so-called “Leeds demos”) the idea was simply to document the existence of a song, and provide a transcription and a guide version so that other artists might record them.

It was a successful business move (credit Dylan’s cagey manager Albert Grossman) bringing not only a groundswell of chart-bound Dylan records but, in time, shattering the longstanding Tin Pan Alley songwriting model. One wouldn’t ordinarily expect musical revelations in this setting, and to be fair, a number of the Witmark demos fall flat, the singer rushing the tempo or getting bored (a situation which manifests itself with “Let Me Die In My Footsteps”, Dylan abandoning his Cold War epic three verses in).

Yet The Witmark Demos is a kind of alternate early history of Dylan’s songwriting process, “writing five new songs before breakfast,” as he once famously quipped. Immortal compositions – “A Hard Rain’s A-Gonna Fall”, “Blowin’ In The Wind”, “The Times They Are A-Changin’” – are here, credible proxies for their illustrious studio counterparts. Witmark duly filed these demos away, readying them for stamp-of-approval covers by The Seekers, The Silkie, Peter, Paul & Mary – as if Dylan’s versions were inadequate somehow. Still, moments of serendipity are liable to appear at any moment. “Ballad For A Friend”, among the earliest compositions here, is one such gem. Set up with gently hypnotic bottleneck guitar and an exquisitely wistful, melancholy vocal, its tale of innocence lost unfolds in panorama, reflecting a certain cinematic quality. “Paths Of Victory”, slowed down and gospelised, is equally divine, distilling the essence of hopeful, better-world-a-comin’ Woody Guthrie. Other substantial, ‘lost’ non-LP songs – the heartbreaking “Seven Curses”, a spellbinding “Tomorrow Is A Long Time”, a primordial piano workout of “I’ll Keep It With Mine” – inarguably deepen the Dylan canon.

Besides “All Over You” and “Ballad For a Friend”, Witmark also presents another dozen-odd songs composed, then kicked to the kerb. Some (“Bound To Lose, Bound To Win”) are instantly forgettable, barely more than sketches. The fetching rambler’s tale “Gypsy Lou” is decidedly minor, too, but conjures a likeably restless mood and atmosphere. Others – the brooding “Long Time Gone”, the doleful “Guess I’m Doing Fine” – are lonesome, shaggy-dog tales par excellence.

Judgment-day songs “Watcha Gonna Do?” and “I’d Hate To Be You On That Dreadful Day” scraping at the morals of a world gone wrong, emerge as fascinating working drafts, foreshadowing substantial works to come, like “When The Ship Comes In”. Then there’s “The Ballad Of Emmett Till” and “John Brown”, devastating protest songs both, but perhaps over the line, too didactic and ham-fisted for ongoing attention. Yet that’s the beauty here: even grandiloquence served a useful purpose – as a sounding for Dylan’s more artful later drafts.

It’s a mixed set: a fuller view could have included the contemporaneous “Broadside” demos, or even further Columbia outtakes. But in the jigsaw puzzle that is Bob Dylan, The Witmark Demos are crucial pieces, and it’s easy to get lost in the depths, the sheer audacity and beauty, of this music.
Luke Torn