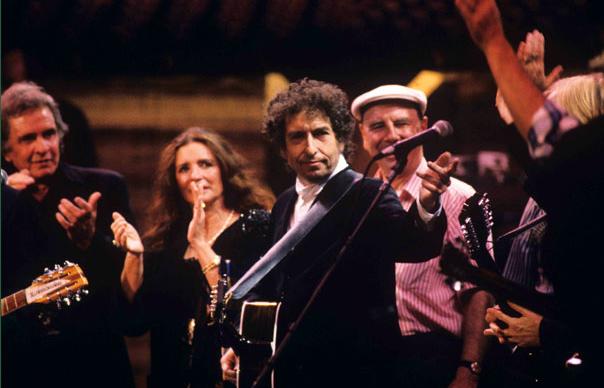 The Bobfest, as Neil Young christened it, was born out of a desire on the part of Bob Dylan’s record company to pump a little life into a career that, in the closing months of 1992, appeared to be becalmed, if not moribund. His last album, in 1990, had been the unremarkable Under The Red Sky, a dampener to the hopes raised a year earlier by Oh Mercy. In 1991 he received a lifetime achievement award at the Grammys, which his most recent biographer, Ian Bell, describes as tantamount to presenting him with his own obituary. The world did not yet know that Dylan had been working on a couple of albums’ worth of material drawn from traditional and archive sources; the first of them, Good As I Been To You, would be sprung on the public a couple of weeks after the concert at Madison Square Garden, but time would need to pass before his admirers could see that those sessions had given him a new sense of direction.

If the 30th Anniversary Concert Celebration, as it was officially titled, seemed at the time like a marketing wheeze, then at least the show contained moments that turned it into something more than an all-star love-in or, indeed, another obituary. And when it seemed in danger of choking on its own goodwill, a sudden eruption of drama reminded us of the existence of a harsher world outside the bubble of privilege, as Dylan himself had done three decades earlier.

The mood in the Garden crackled with the sort of anticipation normally accompanying a big fight. Filmed during rehearsals, a poignantly youthful and cheery Lou Reed sets the mood. “There I was, playing guitar,” he says. “I look to my left, there’s Steve Cropper. To my right is Duck Dunn. Booker T is on keyboards. It’s so much fun that how can it be legal?” He also namechecks G.E. Smith, Dylan’s guitarist for the previous couple of years and now, in his electric blue suit and New Romantic haircut, the evening’s overactive musical director.

The concert went out live on a pay-per-view channel, and a sign that the TV director was not entirely attuned to the evening’s nuances comes when he virtually ignores the presence of Al Kooper at the Hammond B3 in John Mellencamp’s brash opening “Like A Rolling Stone”. But Reed returns to provide an early highlight, peering through wire-framed specs as he reads the words of “Foot Of Pride” from an autocue, phrasing the lines with great ingenuity.

No prompting is necessary for Eddie Vedder on a soaring version of “Masters Of War”, accompanied by Mike McCready’s guitar and Smith’s mandolin. Other impeccable performances include Willie Nelson’s “What Was It You Wanted”, Richie Havens’ “Just Like A Woman”, Neil Young’s “All Along The Watchtower”, Chrissie Hynde’s “I Shall Be Released”, Eric Clapton’s “Love Minus Zero”, The Band’s “When I Paint My Masterpiece”, George Harrison’s “Absolutely Sweet Marie” and a duet by Roger McGuinn and Tom Petty on “Mr Tambourine Man”.

The moment of high drama comes from Sinead O’Connor, who had planned to sing “I Believe In You” but, having torn up a photograph of the Pope on Saturday Night Live while performing Bob Marley’s “War” two weeks earlier, is received with mixed cheers and boos, the sounds of disapproval intensifying as she stands there in silence before responding by spitting out the lines of “War”. Kris Kristofferson, having introduced her as “an artist whose name is synonymous with courage”, leads her gently away.

Some of the cuts made in order to squeeze a four and a half hour concert into a three-hour film – Sophie B. Hawkins, George Thorogood, Harrison’s messy “If Not For You” – don’t matter. But it’s a shame they haven’t included Dylan’s own rendering of “Song To Woody”, the first thing he sang on the night and a nod to the ostensible reason we were there, to recognise the anniversary of his Columbia debut, on which it had appeared, the first recorded evidence (discounting a talking blues) of the talent of the greatest songwriter of his era.

He performed it with the aid of just a Martin D-18 guitar and a proper measure of seriousness. In the film his first contribution is “It’s Alright, Ma (I’m Only Bleeding)”, prefacing the return to the stage of McGuinn, Petty, Young, Clapton and Harrison, who share the verses of “My Back Pages”. Focused and succinct, it’s everything the subsequent version of “Knockin’ On Heaven’s Door”, in which the whole company – also including the Cash and Clancy families – assembles for an interminable singalong, is not. Then the stage clears, leaving only Dylan to finish with a perfectly judged “Girl From The North Country”.

It’s funny to think that as we left the Garden that night, our heads filled with songs and thoughts of the past, the second half of Bob Dylan’s career was about to begin.