Holding on for tomorrow… The definitive British band of the 1990s unveil their definitive boxset (21 discs!)... 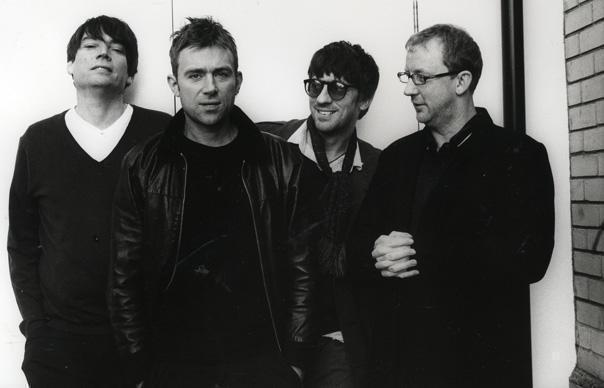 Holding on for tomorrow… The definitive British band of the 1990s unveil their definitive boxset (21 discs!)…

Britain’s got talent. It’s got dancing dogs, xylophonists, gymnastic troupes, puppeteers. It’s got a band from Colchester with shoegaze haircuts and a drama student singer. But critics in 1992 find Blur shallow and their new single, “Popscene”, isn’t selling. Tonight they’re in Plymouth as a support band on The Jesus And Mary Chain’s “Rollercoaster” tour. In the hotel bar, someone’s playing piano. Classical repertoire. Then some Brecht-Weill. Then moody jazz. This guy knows his stuff. Finally, Damon Albarn closes the piano lid and wanders over to rejoin his bandmates. What a dark horse he suddenly seems.

Albarn’s hidden depths were Blur’s passport to vindication and longevity. Two years later, they celebrated their first No 1 album (Parklife) and chart-toppers they remained, whether producing music of heartbroken desolation (13) or venturing into a Moroccan heatwave (Think Tank). Hearing Blur tear up their manual and repeatedly reinvent themselves on this 21-disc boxset, it’s tempting to wonder if a more diverse collection of songs has ever been released in such a format before. The genre that made them famous was Britpop – conceived by Albarn in a unilateral act of artistic defiance, according to Alex James – but the deeper we delve into Blur 21, with its bundles of B-sides and dozens of outtakes, the more it becomes apparent that Blur were as experimental and as crafty as any band in British history. Their finest songs, if you stacked them together, would confirm Blur as the definitive ’90s model of the classic ’60s art school group. Yet Albarn was just as likely to compose an oompah tune or an eccentric, Swiss-sounding waltz. The admirable thing about Coxon, James and Rowntree was that instead of laughing at these songs and refusing to play them, they would rush to their instruments, widening the parameters of Blur to allow in elements – humour, foolishness, a gleeful adaptability – that their indie contemporaries would have haughtily disdained as uncool. Over the course of the boxset, we watch Blur grow into their personalities as if they were the children in Michael Apted’s 7 Up series. On their first album (Leisure), they’re cute indie sock-puppets with the vocabulary of a Dick & Dora book. On their next (Modern Life Is Rubbish), they’re acerbic social commentators with bad hangovers and a resentment of America. As young adults, they become cagey and unwilling to reveal too much (Blur), but are later reduced to mumbling, shattered victims of failed relationships (13) who, as Coxon remarks in the boxset’s beautifully presented book, have travelled so far from “strange little stories about funny men on trains” that their music is now “like a blood-letting”.

Narratives and perspectives proliferate on the journey. You could piece together a parallel history of the ’90s from their B-sides. You could spend weeks immersing yourself in their outtakes. There are 65 previously unreleased tracks, spread across four discs, sequenced chronologically from a rehearsal in 1989 (when they were called Seymour) to a crazed violin-and-melodica dub workout that didn’t make it onto Think Tank in 2003. The Seymour stuff is frantic, oddly funky, with Albarn warbling in a Morrissey baritone and James slapping his bass strings and playing chords. The aesthetic is like something out of post-punk Bristol. Pigbag, perhaps, without the horns. It’s not a good look. Their future seems unpromising.

But as the outtakes reach 1990, Blur tighten up. Albarn finds his voice. Coxon accumulates his pedals. They devise, or are guided towards, a sound that embraces pop and leaves just enough room for chaos. They get better and better, tracing a remarkable trajectory from student favourites to household names. The mind-boggling number of discs (18 CDs, three DVDs) begins to seem justified. Little connections start to do our heads in. A weird plucking noise made by Coxon’s guitar on a 1998 “Caramel” outtake sounds familiar, but from where? You skip back through four hours of tracks and eventually find it: he attempted something similar on Seymour’s demo of “Birthday” nine years earlier. It’s a typical example of Blur making a leap in the dark by revisiting an episode from their past. Coxon, brilliant from day one, was up among the planets on the sessions for 13, operating in stratospheric Hendrix realms. An unreleased ‘jam’ of “Battle” has his guitar roaring and vibrating like the first jet aircrafts slamming up against the sound barrier. The noises he produces as he heads towards the savagely distorted climax are simply indescribable. If Albarn was the writer with the vision to steer Blur through each career-threatening chicane (Suede, Nirvana, Oasis), Coxon was the brooding alchemist who made concrete from Albarn’s concepts. In a nice illustration of how their relationship worked, Albarn – whose one-man demos provide crucial glimpses of the writing process – adds a lead guitar part to his “Beetlebum” demo, obviously intended for Coxon to duplicate when they record it. Coxon ignores it completely.

In the final stretch, after abandoning pop and being reborn as the sort of avant-garde band that Irmin Schmidt of Can would invite to dinner, Blur tunnelled deep into a dubby underworld. An improvised prototype of “Music Is My Radar” (“Squeezebox”) is as far from gutlords marching through London parks as you can get, with insidious disco loops and aromas of Africa. Think Tank, which they made after Coxon’s departure in 2002, groped for an ambitious, Sandinista!-like omnitude that embraced the rhythms of many continents, as if the only thing that could replace Coxon was everything. A band who’d been marketed as four cartoons on the cover of their Best Of were ultimately slaves to their own chameleonic evolution, nomadically following their music where it led them.

With record labels trying increasingly fiendish ways to repackage the past, Blur 21 has the sparkle and sheen of something quite special. It’s a smart, stylish, audio-visual blowout, with three in-concert DVDs and a sumptuous book containing revealing interviews and virtually every photo they ever posed for. But the stunning breadth of the music is the real story. You don’t get bands like Blur very often. They deserve great boxsets, and this feels like one.
David Cavanagh

Q&A
Alex James
This is a really extensive boxset, isn’t it?
“It’s a whopper. It was a year in the making. It took enormous amounts of time. We’ve all been through our attics and combed our archives. We’ve found all kinds of crazy stuff that’s triggered avalanches of memories.”

The way you’ve presented it, it has a real sense of honesty. With the outtakes and demos, did the band make a conscious decision to let people see the unvarnished truth?
“Blimey, no. There’s some stuff that I’m determined will never see the light of day. Our version of ‘Video Killed The Radio Star’ will forever remain a secret, ha ha! But there’s other things, like our very first rehearsal, where we had a cassette running, and that’s the rehearsal where we wrote ‘She’s So High’. It’s lovely to put out a precious memory like that. There was only one cassette of that rehearsal, which Graham went home with, so I’m really glad to finally get my hands on it.”

Blur’s career straddled indie, Britpop, post-rock, African influences… Did you register all the musical changes as they were happening, or were some of them too subtle to notice?
“You’re not aware of it at the time. It’s only now that I can see it. Looking back now, it’s amazing how much ground we covered. But I do think we had a conscious desire to evolve. It’s what kept us going. It’s what makes you feel good about yourself, isn’t it? Creating something new and impressing each other.”

How should Blur fans listen to this boxset? Which discs do you recommend?
“Well, I know they’ve been absolutely desperate for it on Twitter. I don’t know what you’d do with a boxset like this. I mean, I’ve got the boxset of James Bond films, but I don’t watch them all in a row. Sometimes I’ll have a bit of Quantum Of Solace. Sometimes it’s a Dr. No day. It’s just nice to know that you’ve got them all there. I do think some of our early B-sides are cracking. Some of the 13 outtakes, too. It’s a big old box of pick ‘n’ mix. It’s a monumental fucking thing.”

You admit in the sleevenotes that Blur came close to splitting up several times. What stopped you?
“Sheer force of habit… and the music. There’s something very healing about playing music together. It’s better than therapy. Blur played together for two hours every day, and that’s how we got good. We were young, drunk, exhausted. There was lots of fighting. But it was like a sibling relationship. There was definitely a sort of stability there. I don’t know what it was. I think we just liked each other. We were young and arrogant, but we did all right.”

The boxset does a pretty effective job of confirming Blur as the band of the ’90s.
“I’m not sure about that. Are we a band of the ’90s? I know we’re playing a gig this summer [Hyde Park, August 12]. There was so much good music around in the ’90s, that was the thing. It was an incredible time to be in a band. But now, I don’t know. Bands are like farms. The big ones are getting bigger and the small ones are disappearing.”

Will there be another Blur album?
“I have absolutely no idea at all. It depends what day of the week it is, and who you ask. But we do see a lot of each other and that’s nice. I don’t think anybody really knows if there’ll be another album. I certainly don’t. I’m just the bass player.”
INTERVIEW: DAVID CAVANAGH

She’s So High (Disc 15)
Eleven minutes of a 1989 Seymour rehearsal. They’re working on the song that will be Blur’s first single. Damon (raucous vocals), Graham (Fripp-like sustained notes), Alex (slap bass!) and a drum machine. Dave had a proper job in those days.

Beached Whale (Disc 16)
Damon demo from 1992. Written in the ‘hungover’ style of “Peach” and “Blue Jeans”. Needs colouring-in and fleshing-out by Blur, which it never got. Note the foretaste of Parklife’s busy high streets: “the inner-city flora that grows around my feet.”

Cross Channel Love (Disc 17)
Demoed for The Great Escape. Curious staccato vocals tell an odd story about passengers on a ferry terrified they’re going to drown. Imagine a nautical version of Roxy’s “In Every Dream Home A Heartache”.

“1” (Disc 18)
From an unreleased session produced by Bill Laswell in 2000. Tinkling vibraphone, echoes of Beck, then a surprising – almost old-fashioned – return to the bright pop sounds of 1994, which is possibly why Blur consigned it to the vaults.

Sir Elton John’s Cock (Disc 18)
Excellently titled outtake from Think Tank. Albarn plays the chords to Lennon’s “Imagine” and improvises fuzzy lyrics about the end of the world. A more romantic section begins, slightly suggestive of “The Universal”, but the fun stops abruptly after 84 seconds.