“Guess what? I got a fever. And the only prescription is more cowbell.” Classic BOC, boxed... 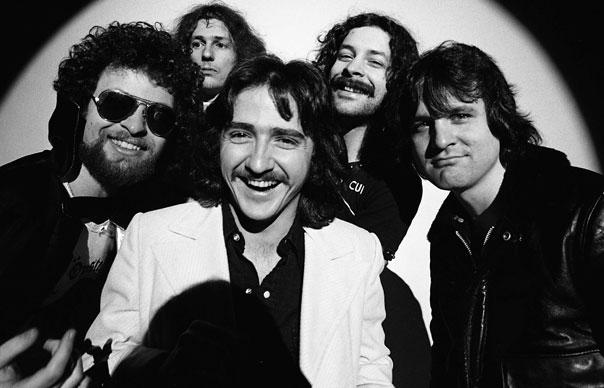 “Guess what? I got a fever. And the only prescription is more cowbell.” Classic BOC, boxed…

As much as it is in their umlaut and heavy rock, Blue Öyster Cult’s story is also written in their cover versions. A faithful, affectionate “Be My Baby”. After John Lennon’s murder, a screamingly heavy note-perfect “I Want You (She’s So Heavy)”. A crazed 1972 “Born To Be Wild”, not to mention a 1978 “Kick Out Their Jams”. While they enjoy a reputation, in part thanks to the efforts of The Simpsons and Saturday Night Live, as the archetypal metal band of middle America, Blue Öyster Cult were a far poppier, more melodic, even more countercultural proposition.

A lot of guitar, a lot of show, a lot of mythology: at their best, the band were an arena rock MC5. A garage rock band with chops in excess of their calling, the young members of Blue Öyster Cult couldn’t fit in on Elektra, and instead spent the 1970s making a fantastical world of their own on Columbia. Strange hierarchies. Automotive speed. Sado-masochism. Blue Öyster Cult might well have been designed with the interests of the college-age male in mind. Rather than show the world their unimpressive faces, the band hid behind a firewall of mystical imagery and enormous riffs. Even until the end of their career, their albums were assembled with the help of clandestine guests: producer Sandy Pearlman; journalist Richard Meltzer; Patti Smith.

All intoxicating stuff. But without the band’s classic 1976 single “(Don’t Fear) The Reaper”, it’s doubtful we’d be talking in quite this detail. Written alone, as were later hits like “Godzilla”, by the band’s extraordinary guitar player Donald “Buck Dharma” Roeser, the single was a watershed moment for the band. It took BOC from a band you would see play at a city college to one you would see at a metropolitan sports arena and made the inescapable fact of death a staple of FM rock radio like no song since “Stairway To Heaven”.

Having tasted the highs of success, however, it became difficult for the band to know quite where to go next. Their records remained as theatrical as they had hitherto been, but their concepts were now written with the mainstream rather than underground in mind. Spectres from 1977 was propelled by “Godzilla” and “RU Ready To Rock”. Meanwhile, throughout the late 1970s, the band would be able to feed their live repertoire (there are three original live albums in here, a “best of the broadcasts” live radio disc, and also a download code to four more full concerts) by adding to their repertoire of decent songs at about the rate of one an album.

Most, like “Black Blade” (from 1979’s Mirrors) or the Rainbow-like “Burnin’ For You”, another Buck Dharma joint from Fire Of Unknown Origin (1981) are good. Their parent albums, beyond 1980’s Cultösaurus Erectus, however, are more of a challenge, a mixture of self-glorifying heavy metal anthems and science-fiction hijinks (writer Michael Moorcock wrote songs for BOC, as he had done for Hawkwind) played out in Jim Steinman-style AOR soundscapes.

It’s particularly painful to attempt to reconcile, say, ’85’s flat Club Ninja as the work of the same band that made the first three records included here. Known for their monochromatic covers, the band’s eponymous debut (1972), Tyranny And Mutation (1973) and Secret Treaties (1974) enjoy a mythology of their own, and rightly so. These are “the black and white albums”, and they announce the death knell of 1960s peacerock culture in terms abstract (“Transmaniacon MC”, about Altamont), anthemic (“The Last Days Of May”) and formal (“Hot Rails To Hell”, written on their first tour, supporting Alice Cooper).

The band’s management had initially proposed them as an American riposte to Black Sabbath, (the two would later tour together), but what they got was something less monolithic, but ultimately far more enjoyable and dangerous. At their peak Blue Öyster Cult played music with the fury of punk, the classicism of Bruce Springsteen and the macabre preoccupations of the Velvets. It’s hilarious, and at the same time no laughing matter at all. Cowbell and all, it is simply great rock’n’roll.
John Robinson

Q+A
Eric Bloom
What’s it like seeing your career laid out in a box like this?
My favourite disc is the rarities, the live tapes of “I Want You (She’s So Heavy)”, and the three songs that we submitted to the movie Teachers. Terrible movie, but I think the songs are good. Our management did the dirty work of listening to all the tapes. Our soundman George had a lot of these, and he did a lot of work cleaning them up. There’s a Who song, I think. I was talking to our manager and he said, “There’s a better performance of that but the lyrics are so wrong we couldn’t put it on there.”

Do you see your career as pre-“Reaper” and post-“Reaper”?
That’s sort of true. When we weren’t making a living we had band houses; a lot of the writing was collective. We would create in the basement or living room. Tyranny And Mutation, a lot of it was written on tour. I remember sitting in hotel rooms and Albert would hit a spoon on a book for a drum sound. But as we got more successful, we got four-track recorders: Buck wrote “Reaper” like that and just walked in with a completed song.

How did you evolve from the underground Stalk-Forrest group to the heavier Blue Öyster Cult?
Before I got there, it was like a jam band with improvised lyrics. We were not making a living playing original material, so we had to go back to the bars and play cover material, which honed our skills a little bit. We would get fired if we played originals. It was a lot of fun. We used to play biker bars and there were fights every night, guys would shove another guy’s head in the bass drum. So we got louder and heavier – it was evolution. We would play an original and say, “Here’s a Glen Campbell song…”

What do you make of it when Blue Öyster Cult shows up in The Simpsons or Saturday Night Live?
We’re always happy to show up in mainstream places like that. The “More cowbell” sketch was from the mind of Will Ferrell, I think.
INTERVIEW: JOHN ROBINSON