BLITZEN TRAPPER – DESTROYER OF THE VOID

Slow out of the traps, a great American band emerge on album number five... 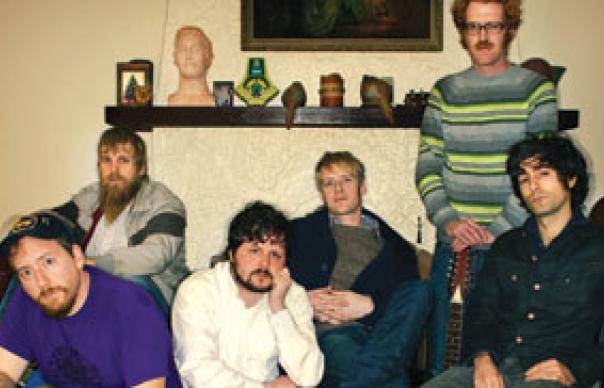 Rock fans of a certain stripe may find themselves on familiar territory with this latest album by Portland’s Blitzen Trapper.

There is mention of a hotel named after the Grateful Dead’s “Brokedown Palace”, and a distinctly Beatlesy song that hinges around the refrain, “I’m always sleeping”. “The Man Who Would Speak True” makes magic realist capital out of outlaw clichés – “godless bum”, “stolen gun”, “midnight train”, “dusty plain” and so on. The second line of the album involves running “like a rolling stone”. And for a good dozen listens, it sounds as if Eric Earley is singing about a mystical child called Isis in “Below The Hurricane”. In fact, Earley is merely slurring the words, “I said”. But Destroyer Of The Void is so packed with signifiers, such a blatant nod in the direction of Dylan seems entirely plausible.

When Blitzen Trapper first came onto the Uncut radar in 2006, however, they were a rather different beast. A UK compilation of their first two American albums (sharing the same cover design and name, confusingly, as the second one, Field Rexx) presented them as another Pavementish lo-fi group in a region, the Pacific Northwest, liberally crawling with them. A handful of neat songs, notably a loping charmer called “Asleep For Days”, suggested they might be one of those solid American bands destined for mild acclaim and general obscurity. But solid American bands can sometimes find the time and space to evolve in a way their British counterparts cannot, and consequently, 2008’s Furr saw the band flourish with a blend of classic Americana and zinging, McCartneyesque powerpop.

That formula is repeated, with exceptional skill, on Destroyer Of The Void. It’s hardly radical stuff, not least because there are plenty of other bands currently operating in a similar area. But the 12 artfully crafted songs here suggest Blitzen Trapper should now be judged in the elevated company of Wilco, Brendan Benson and The Raconteurs.

The Wilco comparison is especially apposite, since Earley manages and updates his influences with the same apparent ease that Jeff Tweedy and Jay Bennett displayed on 1999’s Summerteeth. “Laughing Lover” and “The Tailor”, in particular, sound like all the Beatles and West Coast allusions have been refracted through some kind of Wilco filter, resulting in a crisp and catchy, baroque Americana. Analogue synths cut a path through the guitars, but there’s still a satisfying woodiness to the songs, recorded in a Portland attic studio over two sessions in January 2009 and January 2010.

Earley’s lyrics, meanwhile, are quite different from the impenetrable anxieties that were long Tweedy’s stock-in-trade. He’s clearly enamoured with Dylan – never more so than on “The Man Who Would Speak True”, a wry transfiguration of frontier myth that feels very much like a companion piece to Furr’s “Black River Killer”. But Earley’s dreams of escape often take on a cosmic dimension, so the opening title track soon becomes a rolling prog-pop suite, with hints of Procol Harum. Serpents hang “from a pale and nameless tree”, and horses are stolen as the protagonist heads for the sea before, Earley reveals, “I hopped a ship, a silver seed/Past galaxies and stars we speed to endless planets worlds unknown.”

Again, the juxtaposition of western elegy and sci-fi speculation is not exactly innovative. The spirit of early-’70s Grateful Dead can also be detected in the exquisitely pinched, “Uncle John’s Band” harmonies that open “Destroyer Of The Void”, and throughout the outstanding “Evening Star”. But if the sheer weight of reference might overwhelm most bands (is that a Gram and Emmylou homage when Alela Diane joins Earley to duet on “The Tree”?), Blitzen Trapper emerge at the end of this hugely enjoyable LP as one of those rare bands who manipulate rock tradition in a knowing but open-hearted way, rather than being imprisoned by it. “Heaven and earth are mine, says I,” notes Earley on “Heaven And Earth” and, for the time being at least, it feels like sacred musical elements are in the safest of hands.
John Mulvey

Q&A Eric Earley
Destroyer Of The Void seems packed with artful allusions to ’60s and ’70s rock and Americana. Was that a conscious decision?
Like anybody, I write what I know and what I like to hear, so it’s really just a reflection of the sounds and ideas that I’ve been into my whole life. To me, all modern pop music finds its source in the blues and The Beatles, and you can choose with any given song how close to the source you want to get.

Can you tell us a little bit more about the tracks “The Man Who Would Speak True” and “Destroyer Of The Void” itself?
Both of those songs are stories that harken to the idea of the prodigal, the man who seeks for what he cannot have, for what is not there to begin with. “Void” deals more with the voices that speak to us, that guide us or help us or hinder us in the way we would go. “True” is a more complicated parable as far as imagery goes, and it has to do with the words we speak, whether thinking or unthinking, and their power and the ways in which they shape reality as incantation.