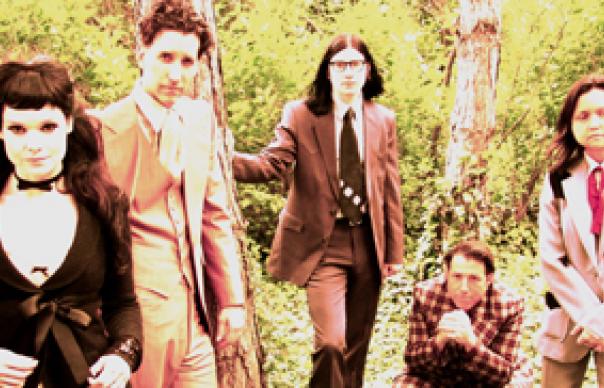 When Blanche first emerged in 2004, their mystique was part-rooted in how leader Dan Miller had previously spent time in a couple of late-’90s garage bands that included Jack White. For a while, they seemed happy to ride on the back of that connection. White strummed guitar on first single “Who’s To Say”, while Dan Miller’s creepy, often funny, countryphiles supported the Stripes on a major British tour.

The three-year interim has found Blanche in various states of health: backing Loretta Lynn on Van Lear Rose, sidelined by Miller’s new film career (he was in Johnny Cash biopic Walk The Line) and fielding rumours of a serious split. Thankfully, Little Amber Bottles is the work of a band recharged. Feeding off country’s primal impulse, they’re still the embodiment of Old Weird America. Visually, too, they’re spot on. The sort of shock-haired oddballs you’d expect to find stalking the back of the revival tent in O Brother, Where Art Thou?.

“What This Town Needs” finds both Dan and wife Tracee Mae in killer form – like Nancy Sinatra and Lee Hazlewood cavorting with The Gun Club. His voice is hard, hers oozes an odd warmth. Mrs Miller is best heard on “A Year From Now”, a gorgeous, loping ballad in which banjo and strings are eventually smacked aside by fat guitars. Her own “No Matter Where You Go” is eloquently plucked, aided by guest Isobel Campbell’s serene cello. Resident Blanche banjoist (and Raconteur) Jack Lawrence also offers his own fare, the heavily Gram Parsons-influenced “Death, Where Is Thy Sting?”

For the most part though, these are Dan Miller’s musings. The songs allude to hurdles overcome and demons placated, if hardly cast out. “We Didn’t Quit” is a dark relationship tale, while the initial calm of “The World I Used To Be Afraid Of” suddenly heads into murder ballad territory: “To let you turn your back on true love would have been a mortal sin/So I held you underwater until you finally gave in”. Unsettling to the last, it’s Blanche all over.