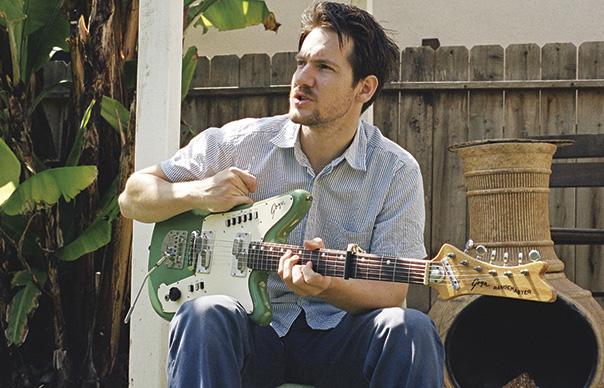 The title of a song on Blake Mills’ subtly brilliant new album could describe the 28-year-old artist’s career so far: “Just Out Of View”. Outside of his elite musical circle, Mills’ name will register primarily among close readers of album credits; in 2014 alone, he played guitar on LPs from Benmont Tench, Lili Haydn, Neil Diamond, Dan Wilson, Ed Sheeran, Sky Ferreira, Carlene Carter, the Belle Brigade and Conor Oberst. He’s also making a name for himself as a producer, though what will be his highest-profile project to date – the Alabama Shakes’ second album – hasn’t come out yet.

A Malibu kid, Mills got guitar tips from Dickey Betts’ son Duane, a neighbour, before forming Simon Dawes with his schoolmate Taylor Goldsmith in 2005. As that band morphed into Dawes, Mills struck out on his own, touring with Jenny Lewis, Lucinda Williams, Band Of Horses and Julian Casablancas, while doing sessions with a diverse assortment of acts including Weezer, the Avett Brothers, Norah Jones and Kid Rock; he cut his first album, Break Mirrors, in 2010, but few heard it. Two years later, Mills turned his focus to production, working with Jesca Hoop, Sara Watkins, Sky Ferreira and Billy Gibbons, as well as accompanying and opening for Fiona Apple on their Anything We Want tour. And his jam sessions at Venice’s Mollusk Surf Shop continue to be a hub of an intergenerational SoCal musical community.

Though Mills has built an impressive CV in a relatively short time, the music he’s made up to now doesn’t fully prepare the listener for a close encounter with Heigh Ho. From moment to moment on this sublime record, you might think you’re listening to some just-discovered gem from Randy Newman (“Cry To Laugh” could be an outtake from Nilsson Sings Newman), Ry Cooder (“Gold Coast Sinkin’”), Jackson Browne (“Half Asleep”, “Before It Fell”) or Lowell George (“Curable Disease”). But Mills isn’t a revivalist, nor is he bound by genre; he simply draws from his expansive palette, mixing colours and textures to give each song precisely what it needs to come across as directly as possible on an album that is less a collection of tracks than a series of captured moments.

Opener “Am I Unworthy” sets the tone; the song itself resembles a Muscle Shoals soul ballad from late ’60s, but it’s radically understated at first, as Mills delivers the ardent but troubled lyric (“What if I’m unworthy of the power I hold over you?”) in a subdued tone, with just the hint of an ache, like a self-questioning lover trying to not to lose control. At first, the only other sound is his guitar, riffing and tapping rhythmically at the same time. At the mid-point, Jim Keltner’s rumbling drums appear just before Mills’ guitar erupts in a tormented solo, joined by Rob Moose’s swelling string section at its climax.

The meaty middle of the album is the three-song sequence of “Seven”, “Don’t Tell Our Friends About Me” and “Gold Coast Sinkin’”. The first is Mills’ take on the traditional Nashville turnaround – “It’s the seventh song on the record that always makes me cry/It’s been seven years since we caught each other’s eye” – presented as a Gram & Emmylou-style duet with Fiona Apple, who’s never sounded warmer or more empathetic. She provides a counter- vocal on the overtly confessional “Don’t Tell Our Friends About Us”, Heigh Ho’s most structurally and psychologically intricate song, as Mills follows the title refrain in the proper chorus with a coda, admitting “I know I fucked up” eight times leading up to a falsetto “but please”, resolving into the title phrase. The track also offers a zesty dialogue between Mills and Jon Brion, both on small tiples guitars. “Gold Coast Sinkin’” provides a release from accumulated emotional freight, ambling catlike across the spacious sonic topography, punctuated by the growling of a wickedly distorted guitar.

Heigh Ho is distinguished by its beauty, dynamism, naturalness and economy; every note and word comes across with utter clarity because there’s nothing extraneous between the music and the listener. Mills has attained a particular kind of perfection – he’s made a timeless California album, that demands to be treasured right alongside the auteurist masterpieces it so thrillingly evokes.
Bud Scoppa

Q&A
Blake Mills
Do you feel like you’re part of a Los Angeles musical community?
Definitely. There’s always been a rapport between musicians who push each other to do something new, and those musicians tend to
find each other.

Your album strikes me as carrying on a rich legacy.
When you fall in love with something, it enters your vocabulary, and you have to find an appropriate way to use that stuff where it’s not just emulation. So making Heigh Ho was really an exercise in trying to make the right decisions rather than following any genre, and the through line is a sense of personal honesty. If it emulates other records that are also works of honesty, then I take that as a very generous compliment.

I love the way you’ve stripped everything down to its essence.
Popular music is becoming less and less dynamic, because people are compressing everything to make it sound louder than the next thing. That’s not a musical idea to me – it’s fast-food music; nature doesn’t work like that, and my favourite music doesn’t sound like that. So I tried to make
a record that sounds more like how these songs are supposed to be. It may be a quixotic effort, but I feel like it’s important to be on the side of history where you do something that feels honest and right because you believe in it – and whether or not it’s wildly inappropriate for the times doesn’t come into the equation.
INTERVIEW: BUD SCOPPA