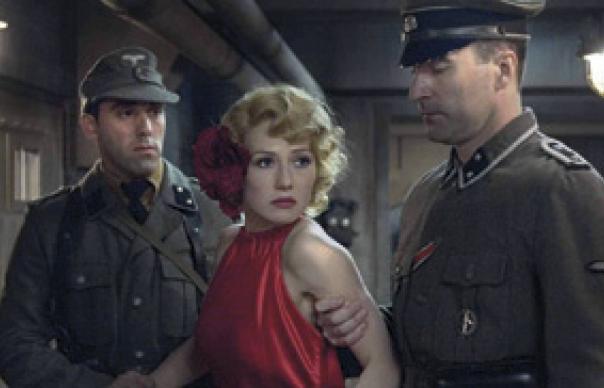 Rarely one to be troubled by excess, Paul Verhoeven has pulled out all the stops for his first Dutch film in more than two decades (and duly provided his homeland with its most expensive film ever). A bouncy, high-gloss epic set during the Second World War, with Dutch Jew Rachel Stein joining the Resistance after her family is killed by the Nazis. Disguising herself as an Aryan blonde named Ellis de Vries, she seduces German officer Müntze, and takes a job in his offices, there able to pass privileged information to her comrades; but friends and foes soon prove tricky to distinguish.

Black Book plays out at breakneck pace. So seductive and gripping is its Old Hollywood-style tale of disguises and double-crosses, betrayal and sacrifice, forbidden love affairs and concealed microphones, that its more ludicrous plot twists are easily forgivable in the name of sheer enjoyment. And speaking of seduction, Verhoeven has also armed his film with a femme fatale of quite awesome firepower. Well known as a stage actress in her native Holland, Carice van Houten is stunning as Rachel/Ellis: as witty, sharp, powerful and poised as she is relentlessly physically alluring. Her performance drives the film, lending wry awareness to some of Verhoeven’s more dubious indulgences (was it truly necessary, one wonders, for Rachel to bleach her pubic hair in the name of concealing her Jewishness?), and securing the emotional authenticity of even the film’s most befuddling twists and turns.

Also impressive is Verhoeven’s recognition of the moral ambiguity that rules in time of war. Black Book nimbly resists the customary delineation between moustache-twirling pantomime Nazis and pure-hearted freedom fighters with a rogue’s gallery of flawed and complex individuals, motivated by a confused mix of innocence, desperation, self-interest and ideology. (Oh, and lust. A lot of lust.) Some of the film’s boldest and most moving moments occur when the war has ended, and Nazi sympathisers are being hunted through the streets of The Hague. As gleeful humiliation is heaped upon suspected collaborators, we see lessons unlearned, morality abandoned, and evil birthing further evil.

The film’s gallop through the shady, secret underworld of martyrs, profiteers and double agents is thus denied a neat, conventionally happy ending; consciences are left unclean, injustices unresolved. For all its feisty sense of fun, and for all the breathless pleasures that it offers to its audiences, Black Book is too dark and smart to let its characters fade out into a soft-focus happy-ever-after.