Invaluable comp of the late, great kind of comedy 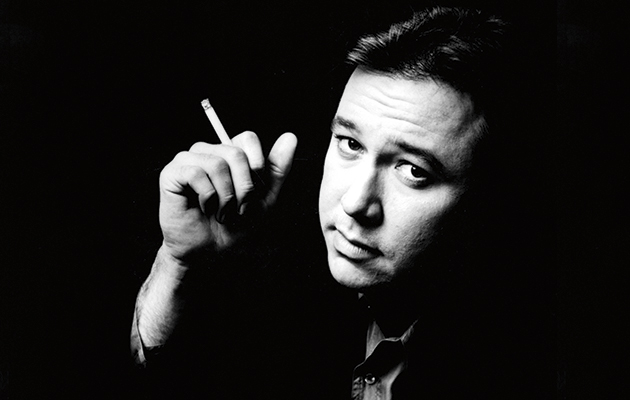 Bill Hicks would have turned 54 on December 16th, 2015 – far from an old man, an approximate contemporary of Jon Stewart, Louis C.K., Chris Rock. It says much about Hicks, for better and for worse, that it’s possible to imagine an almost infinite array of plausible life trajectories had he not been claimed by cancer in 1994, aged just 32 – but not before he’d established himself as the most influential comedian of his era.

Hicks might have calmed down in middle age, resigned himself to comfortable ennoblement among comedy aristocracy. He might have grown crankier, his toying with conspiracy theory devolving into outright 9/11 Truther-dom. He might – very easily – have been marginalised by the sanctimony of online vigilantes, who failed or declined to appreciate that the ultimate butt of (most of) his jokes about women was men. He might have attempted activism, revving up crowds of Occupy demonstrators with anti-corporate rhetoric. Or he might have directed his rage at religion towards touchier targets than American Christians, risking the fate of Theo van Gogh and the staff of Charlie Hebdo.

Hicks’ work contained multitudes, as does this box set, which unites four live specials (One Night Stand, Sane Man, Relentless, Revelations) and It’s Just A Ride, a documentary/tribute released shortly after his death (the latter, while serviceable, was superseded in 2009 by Paul Thomas and Matt Harlock’s terrific American: The Bill Hicks Story). More than two decades later, it’s more remarkable how much of Hicks’ schtick resonates than how little. While some of the topical stuff has dated – his rants defending smoking now seem especially quaint – we remain a way from outgrowing his gleeful meditations on hypocrisy vis-à-vis sex and drugs. Hicks’ refusal to forgive ignorance is also still a tonic, though his famous encounter with a Nashville waffle waitress (“What you readin’ for?” “. . . so I don’t end up being a fuckin’ waffle waitress”) actually seems less funny since the empowerment of the wilfully illiterate by social media.

The last of these shows, Revelations, was recorded at London’s Dominion Theatre in November 1992. Even now, it seems improbable and outrageous that this supremely vigorous presence had little more than year left to live. It’s a glorious performance, Hicks grown confidently into the role of the black-clad preacher emerging from a pit of fire. He appears wholly at home, not just on stage but in London, in front of a crowd which, like himself, regards America with a detached bemusement that occasionally erupts into incomprehending fury.

It’s perfectly possible that Hicks died without knowing what the internet was. That being the case, his famous suggestion to any marketing and advertising types in the Dominion’s audience – “Kill yourself” – now strikes not merely as the key riff of a superb, unfurling routine, but as a last, prescient warning to the future.