Beautifully measured return to the studio from this humble master of English song... 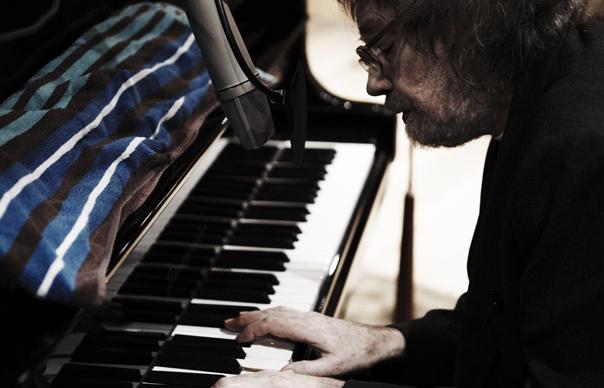 It’s been around forty years, since English singer-songwriter Bill Fay last saw a studio album from conception to completion. This has little to do with Fay’s vision and almost everything to do with the vagaries of an industry that tends to work at cross purposes to the artists that populate it. Fay’s legend rests on two albums released just as the benign visions of the sixties turned inward and self-destructive in the early seventies, a narrative arc that’s reflected in the shift from the Edenic and redemptive song poems of Fay’s debut, self-titled album from 1970, garlanded as they were with orchestra and captured in autumnal colours, to the explosive force of 1971’s Time Of The Last Persecution, where Fay, alongside guitarist Ray Russell and their group, drilled free improvisation into songs sung from what sounded like the end of the world.

Both records subsequently all but disappeared from view, and Fay’s attempted third album sat on the shelf until his eventual rediscovery in the noughties, where the patronage of artists like Jim O’Rourke, Current 93’s David Tibet, and especially Jeff Tweedy and Wilco brought Fay’s songs back into the half-light. Tweedy picked up on the beatific bucolics of the first album, covering “Be Not So Fearful” live; Tibet, whose label has released two albums by Fay, delved deep into the dark heart of Last Persecution. But with Life Is People, Fay’s songs rest in the hands of American producer Joshua Henry, who gathered musicians such as Matt Deighton, Tim Weller, Mikey Rowe, with varying histories (Oasis, Paul Weller, Stevie Nicks), to bring some of Fay’s home-recorded demos off the ferric oxide and into plain view.

It could have been a mess – the hip young producer refashioning his songwriter hero in his own vision. But, fair play to Henry, he’s found a perfect balance here, wrapping Fay’s heart-breaking songs up in production and arrangements that respect the material’s weight, whether with strings and organ on “The Healing Day”, or a gospel choir to support the humanitarian vision of “Be At Peace With Yourself”. The latter already appeared on 2010’s Still Some Light as a home-recorded demo, and it’s wild to hear it transformed from a song from a dusty shelf into a modern hymn, the choir swathing Fay’s vulnerable voice in beams of light.

There’s a case to be made for Life Is People as Fay’s most diverse, divergent album, thanks to Henry’s approach to the material: “This World” essays joy through an easy, unassuming pop song; “Cosmic Concerto (Life Is People)” builds from church-organ soul to a beautiful, forlorn two-chord rock Passion, a classic Fay song that’s more than fit to sit alongside past gems like “Be Not So Fearful” or “Pictures Of Adolf Again”. But as great as the arrangements are, the most devastating performances come from Fay on his lonesome. There’s something in the intimate consort between his piano playing and his vocals that is simply unparalleled, and even when he’s taking on another’s material, like his masterful reading of Wilco’s “Jesus Etc.”, he’s able to imbue the performance with both the necessary gravitas, and an unassuming grace.

Indeed, it’s grace that’s writ most strongly through Life Is People. These songs are far removed from the eschatological visions that mark out Time Of The Last Persecution, and the broad sweep of the arrangements underwrite the songs with a classicist art that’s fundamentally different to the small-group playing that fleshed out the late ‘70s sessions on Tomorrow, Tomorrow And Tomorrow. Henry has shepherded a clutch of graceful songs from demo tapes into a song suite that’s richly arranged without being over-egged, the better to capture the compassion and humanitarian spirit of Fay’s writing. And ultimately, it’s that compassionate vision of song that resonates through Life Is People, as Fay observes the passing of the days with redemption in mind.
Jon Dale

Q&A
BILL FAY
How did it feel to be entering the studio again after such a long time?
It’s a good place to be, a studio. It’s like everybody’s there to do their best by the music. I was walking into the unknown, but we started with “Be At Peace With Yourself”, and everything kind of fell into place. We did a run through, and I could feel the rapport between Matt Deighton, Mike Rowe, and Matt Armstrong, who knew each other and had played together. Alan Rushton was there, and Joshua was saying where he’d like drums to come in.

These songs have a kind of grace that wasn’t there on Time Of The Last Persecution. How have the times impacted on your songs?
I’d only just come to believe in the things I sang about on Time Of The Last Persecution, and so they had an urgency that was totally met by the way Ray Russell, Alan Rushton, and Daryl Runswick played together at the time. It was Ray’s and their album as much as mine… I think I’m fundamentally a plaintive songwriter, with other things thrown in, and anything I’ve ever written since back then is really a variation of the same themes that were in those early albums.
INTERVIEW: JON DALE