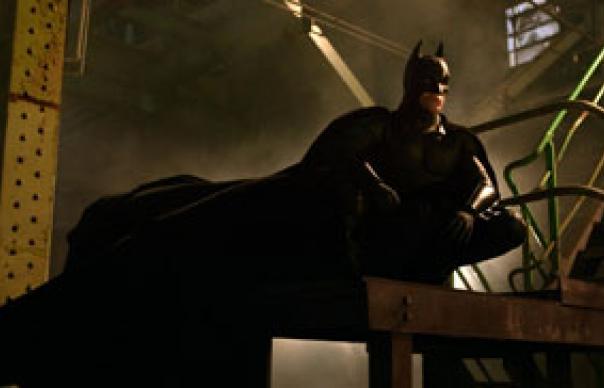 After Joel Schumacher’s gaudy, camp debacle of 1997, Batman & Robin, George Clooney sighed, “Y’know, I think we might have buried that franchise.” Chris Nolan – who in Following, Memento and Insomnia proved himself a modern master of suspense, foreboding and atmosphere – has brought the caped crusader back to life by sending him back to his roots. Taking Batman: Year One as the chief source graphic novel, and co-writing with David Goyer (Blade, Dark City), this intimate, brooding resurrection of the Dark Knight mythology shows us how and why Bruce Wayne became Batman in the first place. We’re halfway through the (long) movie before he dons the batsuit and revs up the batmobile. And then, all hell – or at least all the crazy sickness of a sweating, sprawling, psychotic Gotham City – breaks loose. Blockbuster fans craving a rollercoaster ride will get it in the second half, and it’ll be evident that Blade Runner is Nolan’s favourite film, but in telling of Wayne’s traumatic ticket to reluctant superhero status the movie’s opening passages are anguished and elemental.

Fear is the key. From a childhood scare, industrial heir Wayne’s afraid of bats. He learns to turn that fear around and use it as a symbol against Gotham’s grisliest criminals. When his parents are killed by a mugger, Wayne turns mean. He’s picking fights willy-nilly (“you’re not the devil – you’re practice”) until enigmatic mentors Liam Neeson and Ken Watanabe, members of The League Of Shadows, train him to be more selective and potent. But they’re not simply forces for good, and Wayne returns to the perma-rain of Gotham aiming to clean up the streets himself. Caine, as trusted family butler Alfred, and Freeman, as an out-of-favour Wayne Enterprises employee, are to be his new mentors and allies, while the bat outfit and vehicle are modified from his father’s experiments for the military.
Corruption is rife. Tom Wilkinson’s a crime lord; charismatic Cillian Murphy’s creepy doctor Jonathan Crane with an alter ego as The Scarecrow. There’s a plot to release hallucinogenic toxins into the air. With the help of sole good cop Jim Gordon (Oldman) and assistant DA and childhood friend Rachel Dawes (Holmes), “The Bat Man” is in business. With sheer strength, no little intellect and a dash of high-tech smoke and mirrors, he’s a mighty avenger, flawed but now fearless.

While Tim Burton introduced his cool, dark Batman sixteen years ago, showing affinity with the DC books but shocking fans of the poppy, iconic Sixties TV show, Nolan takes the character’s pain and loneliness further. He anchors his formative years in a strangely plausible reality. Much credit goes to Bale, who manages to draw empathy despite (as in American Psycho) almost parodying macho – the gruff, growling voice, the slightly smug superiority. So dense is the psychological truth that we believe those are his defense mechanisms, hiding vulnerability. He’s also – after The Machinist – completed another remarkable physical transformation. He and Nolan have some fun, too, with Bruce the playboy’s attempts to hide his true nature.

In case this is all sounding earnest – and much of the film is, grippingly so – it contains countless bravura moments, with only minimal use of CGI. There’s Batman gazing down on the Lang-in-sulphur metropolis (actually Chicago). Wayne clambering up snowy mountains in Iceland. The batmobile roaring thrillingly through a waterfall to enter the batcave. Bats like Hitchcock’s birds. And the sense that, unlike Raimi’s Spider-Man or Donner’s Superman, this nocturnal creature could go off at any minute. He’s a loose cannon, a tad trigger-fingered. “I’m not one of your good people, Rachel.” So there’s no Boy Wonder here, no Riddler or Penguin or Catwoman, no sock, pow or holy exclamation mark, and just one cute (sequel-suggesting) in-joke about The Joker. For all the stunning scenery and cast, it’s all about the inner howl under the cowl. This time it’s serious.
For Nolan, this guarantees A-list status. Bale, too. For Batman, it’s back to the night; a princely, poignant return to darkness.