Bat For Lashes – The Haunted Man

A stripped-down - yet chart friendly - return... 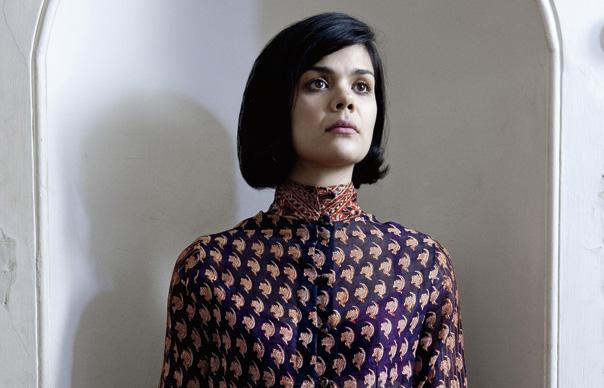 A stripped-down – yet chart friendly – return…

When Bat For Lashes’ darkling “What’s A Girl To Do?” showed up in Brett Easton Ellis’s 2010 novel Imperial Bedrooms – his neo-noir high-school reunion sequel to Less Than Zero – it seemed like a significant artistic coup. Short of retconning your way onto a John Hughes soundtrack or a David Lynch commercial, it represents a pinnacle of a certain kind of 21st century pop ambition. Florence Welch, for one, was chartreuse with envy. But it also brought into focus the oddly precarious state of Natasha Khan’s career: was she already a charming period reference – part of the late-noughties UK tulip craze for pop wonkettes, Kate Bush-babies and La Roux? Or a more resonant, ongoing artistic presence? Less Than Zero’s soundtrack, after all, referenced The Little Girls as well as Elvis Costello.

In some way it feels counterintuitive to talk of the precarity of an artist whose first two albums were both nominated for the Mercury Prize. But The Haunted Man certainly feels like a make or break release, the moment Khan establishes whether she can outlast the whim of pop fashion. Though the cover – a Ryan McGinley portrait featuring a discreetly naked Khan gallantly giving a fireman’s lift to a similarly naked pal – feels on one level shamelessly calculated to generate daft controversy, it also seems intended as a statement of artistic sincerity: enough of theatrical contrivance (the cover of 2009’s Two Planets looked like a Mighty Boosh dream sequence, while the songs featured a bewildering array of personas) – now this, as Mike Yarwood used to say, is me.

“Laura”, the first song to emerge from the album (though not, apparently, a single) gives substance to this intention. Only composed at the label’s insistence, when they felt Khan hadn’t written enough hits, it’s a collaboration with Justin Parker, the co-writer of Lana Del Rey’s “Video Games”, and evidently this year’s go-to guy for swooning, widescreen balladry. From the opening piano twinkles you initially fear an Adelatrous bid for the bland heart of the Radio 2 A-list, but somehow, through the force of her singing and the classic but compelling songcraft, by the time it builds to the chorus – “you’re the train that crashed my heart / you’re the glitter in the dark” – you’re sold. It may be the first Bat For Lashes song to be unashamedly moving.

The song’s bold simplicity isn’t entirely representative of the rest of the album, however, which is lush and cinematic, albeit in the classic manner of say David Lean (Ryan’s Daughter was reportedly an influence) rather than Donnie Darko. Opener “Lilies” floats in on plangent waves of Cocteausish guitar before blooming into a sumptuous synthetic chorus (replete with this season’s must-have retro-accessory: the bass sound from Berlin’s “Take My Breath Away”), while “Marilyn” is a similarly lavish Lynchian powerballad.

It occasionally feels a little too clinically tasteful, as severely and determinedly classic as Khan’s newly bobbed hair. At times, especially on “Oh Yeah” you might be reminded of crystalline geometries of Annie Lennox’s solo Diva-dom. You miss her earlier wildness, even when it risked gauchness. Some songs feel a little too eager to please, too anxious to build to the obvious – “Horses Of The Sun” rides in with an unsettling, vaguely martial verse, like something from Portishead’s Third (and indeed Adrian Utley plays on the track) but then abruptly cuts to a bombastic chorus that seems to belong to another song entirely.

But on the title track Khan comes into her own: stuttering morse code beats give way to the ratatat of musket, fife and drums, heralding the entrance of the male voice choir of some ghostly WW1 division, before erupting into an astonishing symphonic climax. Casting about for reference points you can only think of Kate Bush or Jane Siberry’s more epic moments. But crucially it’s reminiscent of their ambition rather than their stylistic tics. In the past Khan laboured in the long shadows of her obvious influences: on The Haunted Man she’s exorcised some of those ghosts and gone some way to becoming her own woman.
STEPHEN TROUSSE

Q+A
Natasha Khan
Do you think The Haunted Man is your strongest album yet?
I think it’s certainly the most consistent in terms of vision. I wrote about 30 songs and I think the fact it took two and half years to make really paid off. I really pushed myself – my critical voice is quite strong!

Did working with Justin Parker on “Laura” influence the writing of your own songs?
“Laura” was actually the very last song that we wrote. The record company kind of pressured me into writing it because they thought there weren’t enough singles. I thought, I feel really good about what I’ve written so far but if I’m going to do a collaborative thing it’s not going to be with just anyone. And I really liked “Video Games’ from quite early on. So I used my time with Justin to get him to teach me about songwriting things like middle eights.

How did the male voice choir on the title track come about?
“The Haunted Man” was one of the first songs I wrote for the album. It was quite a long piece of music – I was thinking of it as film music or a musical. And I kept hearing male voices. And I went out to Italy to work with Rob Ellis and while were out there he introduced me to a choral master, and we had a fantastic day out in the mountains working out all these crazy harmonic intervals, listening to the Beach Boys and old monks. We actually projected it out of an amp out over a canyon to get that amazing slapback echo, to get that feeling of soldiers coming back from war.