Band Of Horses – Why Are You OK 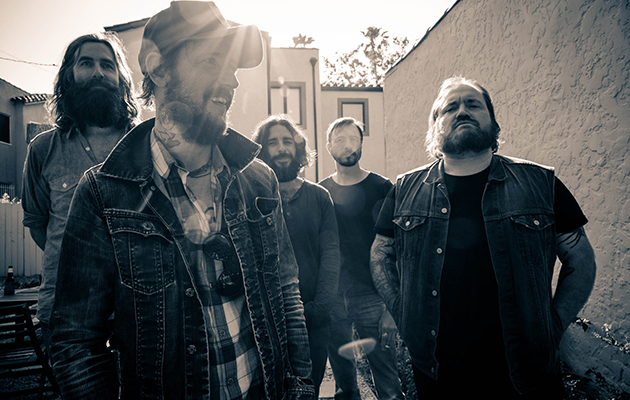 Band Of Horses’ Ben Bridwell has muttered elsewhere his dissatisfaction that Why Are You OK will be heard for the first time largely in spring and summer. It is, he insists, a record for autumn, and he’s right. Measured against Band Of Horses’ previous records, it finds the group’s essential melancholy getting the upper hand in the long-ongoing struggle with their baser rock instincts: it is a record for darkness drawing in, for falling mercury, for “all the trees are turning gold”, as Bridwell has it on “Throw My Mess”.

Why Are You OK begins with the seven-minute suite-in-two-parts “Dull Times/The Moon”. The first portion is a stately procession that feels like it’s about to erupt into a carnival, but never quite does: spectral harmonies sigh over a gradually escalating backdrop, while Bridwell exudes fretful ennui (“Feel like I’m going insane/Why bother?”). When the shift in tempo comes, about five minutes in, it’s with guitars like a motorcycle being kick-started, and it revs quickly into something raucous, almost Jane’s Addiction-y, although Bridwell still sounds plagued by whatever it was (“Blank state and maudlin/In need of something to say” – an audacious tone to take in an opening statement, but one which suits the ensuing album.)

Not everything here is existential disquiet set to counter-intuitively expansive alterna-rock, but quite a lot of it is (no bad thing, obviously: it is possible to situate Band Of Horses in a parallelogram cornered by Radiohead, The National, The Decemberists and Okkervil River). “Solemn Oath”, which builds from a back porch strumalong, decorated by electric guitars sounding as much like banjos as electric guitars are ever likely to, into a(nother) tumult of widescreen rock, includes the telling line “But I’m lucky as fuck/It still ain’t enough”. Still other songs plumb depths sufficiently dark that one can only hope they’re not autobiographical. “Throw My Mess”, superficially a breezy country stomper, secretes the bruising appreciation “Getting me arrested was the strangest way/Of showing me that you’re mine/But it saved my life”.

This isn’t quite a record of two halves – there is a brief instrumental interlude, “Hold On Gimme A Sec”, about halfway through, but this doesn’t obviously cleave Why Are You OK into discrete Acts. There are, however, some (well, relatively) playful moments. “Casual Party”, sounds something like Radiohead playing FM radio rock, and (not incongruently) chronicles the narrator’s overwhelming horror of the suburban minutiae under discussion at the titular soiree (“Awful conversation at the casual party/The job, babble on/the recreational hobbies/No it never stops”). “In A Drawer” is a sumptuous, shape-shifting symphony that fades in and out of a dazed singalong chorus, furnished by a choir comprising guests J Mascis, Sera Cahoone and Jenn Champion (nee Ghetto).

In the interests of creative freedom, Band Of Horses financed the recording of Why Are You OK themselves, but recouped their investment thanks to Rick Rubin – who, not for the first time in Band Of Horses’ history, served as a mentor, editor and facilitator of a new record deal (it was Rubin who got them signed to Columbia for 2010’s Infinite Arms and 2012’s Mirage Rock). Grandaddy’s Jason Lytle, producing, approaches the task as a sympathetic conductor, rather than overbearing auteur. The Grandaddy-est track is “Hag”, a downbeat epic haunted by keyboards which manage that signature Lytle trick of sounding somehow gloomy yet whimsical, and Bridwell’s tendency towards doubt and self-abasement (“Why spend half the time indifferent/And the other half alone?”). Lytle’s touch is also discernible on “Lying Under Oak”, synthesisers whispering behind one of those Band Of Horses ballads on which they demonstrate that one can abandon the verse-chorus-verse-chorus-solo-etc convention without descending into obtuseness.

For all that, the two best moments of Why Are You OK are its least complicated and adorned. “Country Teen” is a wilfully lo-fi country ballad, recorded in a modern facsimile of old-school mono, acoustic rhythm guitar in the left speaker, Bridwell’s voice in the right. And the closing track, “Even Still”, is just exquisite, a lament of loneliness that resembles the unfettered internal monologue of someone hopelessly awake at four in the morning, accompanied by knelling piano chords before being lifted from of its murk by flourishes of psychedelia.

If there’s much complaint to be made about Why Are You OK, it’s only the same objection that might be lodged against Band Of Horses generally. More than once, it is difficult not to drift into wistful contemplation of the splendid, unreconstructed rock’n’roll racket of which they might be capable if they tried underthinking things for a change.