British sci-fi action comedy, with aliens versus hoodies on a Brixton estate... 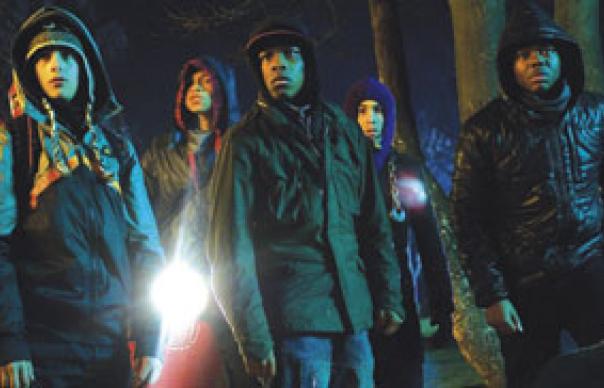 Now, Cornish has turned his attention to more serious filmmaking endeavours. He’s written the Tintin screenplay for Spielberg and Peter Jackson, due for release in October. But we can sample the fruits of his labours earlier, however, with Attack The Block, which Cornish has written and directed – an alien invasion movie, if you will, set on a south London housing estate.

It’s November 5, and a trainee nurse, Sam (Jodie Whittaker), is mugged by a gang of hoodies on her way back to the Brixton tower block where she lives. Which is when, amidst the fireworks, an alien falls to earth. Believing it to be some kind of feral status dog, the gang’s leader, Moses (John Boyega), kills it and takes the carcass back with him to the block as a trophy. Then more aliens turn up, invading the housing estate, looking for revenge. Before long, the hoodies are defending the block from a full-scale alien invasion.

Although very much a British movie in its casting and setting, it’s interesting that Attack The Block’s DNA is conspicuously American. References to The Warriors, Assault On Precinct 13 and Aliens are clearly detectable. Movie references aside, it says much about the globalisation of youth culture that our gang of hoodies share many colourful traits with their American counterparts. The love of hip hop, both the music and its vernacular, is particularly evident here. Phrases like “5-0”, for the police are co-opted directly from American slang. Cornish apparently let the cast rewrite their dialogue, to incorporate their own idiom and mannerisms.

Indeed, it’s to the credit of the cast, largely unknowns, that they hold our attention so well. John Boyega’s Moses is a fierce and charismatic presence, while Alex Esmail’s wheedling Pest and Leeon Jones’ bookish Jerome are also stand-outs. Of the professional actors around them, Nick Frost plays Nick Frost as a cheery drug dealer, Jodie Whittaker is strong as the film’s moral centre while Luke Treadaway is slyly funny as a stoned posho.