ARCTIC MONKEYS – SUCK IT AND SEE

The wit is running dry – but these Sheffield rockers are discovering bigger, bolder dimensions... 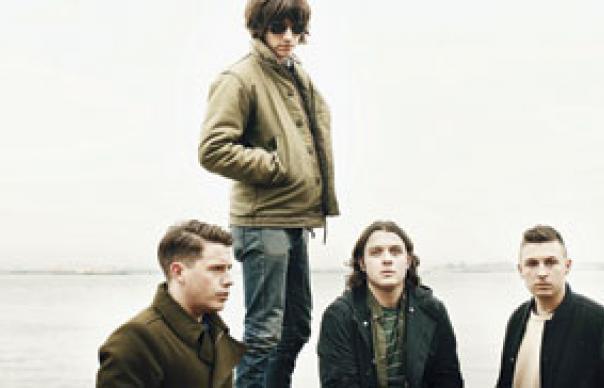 We liked Alex Turner as a northern urchin, coming from nowhere armed with a swaggering confidence and funny lyrics that felt like entirely accurate representations of what it’s like to be young and clever in an English town in the 21st century. As a typical rock star, complete with celebrity girlfriend and twin homes in trendy east London and even trendier Brooklyn, Turner seems to have conformed, and lost much of what charmed us in the process.

Arctic Monkeys threw something of a curveball with their last record, Humbug, which was recorded with Josh Homme at Queens Of The Stone Age’s studio of choice, Rancho De La Luna. Suck It And See came together in a rather glossier Californian location – Los Angeles’ Sound City, the studio where American rock classics like Nevermind are made, with Turner’s favourite producer James Ford at the controls. The first two tracks to emerge from the sessions, though – a ’60s-style garage rocker called “Brick By Brick” largely sung by drummer Matt Helders, and first single “Don’t Sit Down ’Cause I’ve Moved Your Chair”, a jokey list song with a Cramps-ish feel – suggested this remains a band who like to keep their fans on their toes.

But Suck It And See is not a trip into beat group retro or dank gothabilly. It does sound familiar, though. It sounds, mainly, like The Smiths. Or, more accurately, like solo Morrissey; mid-tempo rhythms, themes of curdled romance, guitars that ring and jangle, and an unmistakeably Smithsian edge to Turner’s increasingly deep and restrained vocals. Oh… and jokes. Except Turner’s waggish wordplay isn’t that funny anymore.

The smartarse puns and pop culture references that made debut Whatever People Say I Am, That’s What I’m Not so striking appear to have become a trap that Turner can’t break free from. Five of the 11 songs here – this is a short, sharp album – are almost scuppered by the singer-guitarist’s increasingly strained attempts to be witty. “The Hellcat Spangled Shalalala” is a lovely mix of chiming highlife guitars and uplifting chorus. But Turner’s obsession with the theme of the femme fatale finds him fighting the law of diminishing poetic returns. “Home sweet home, home sweet home, home sweet booby trap/I took the batteries out my mysticism and put them in my thinking cap” he croons, and the song’s over before you’ve finished wincing. And “Don’t Sit Down…” remains a bizarre choice for a single, not least because no decent list song should find room for the clumsiness of “Fill in a circular hole with a peg that’s square”, let alone its nonsense about a “chip pan fire fight” and doing “the Macarena in the devil’s lair”.

Turner and co broke a habit of in-studio arranging and overdubbing for this record, rehearsing the songs and asking Ford to capture them as live as possible. Perhaps this explains the surprise twist in the Arctics’ career, whereby Turner’s lyrics have declined while Jamie Cook’s guitar playing has improved beyond recognition. Finding a ringing, sky-scraping style that combines elements of Johnny Marr, John Squire and The House Of Love’s Terry Bickers, Cook’s emergence as a guitar hero on the likes of “Black Treacle”, “All My Own Stunts” and “Piledriver Waltz” lends a whole new dimension to a band that initially depended on a kind of thrashing staccato clatter.

The closing “That’s Where You’re Wrong” sends the album out on a high, reminding you that the Arctics always sounded more Manchester than Sheffield. Even the biggest Arctics fan wouldn’t have suggested beauty among the band’s key qualities. But Suck It And See is full of beautiful tunes, beautifully played and beautifully produced. It’s a record that goes a long way toward breathing new life into the busted flush of English indie with a romantic Britpop sound that stands comparison with The Smiths, The La’s and New Order. But in order to complete that leap – and make a record that equals the impact of their first – the lead guitarist needs to give the songwriter a good, hard kick up the arse.
Garry Mulholland