If you missed it last year, seek out Ed Harris' fine Western 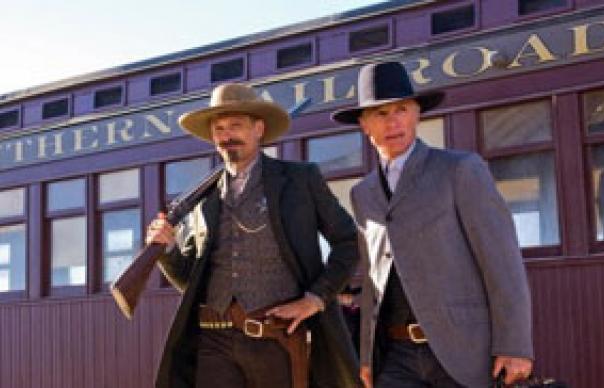 Produced, directed by and starring that redoubtable actor, Ed Harris, Appaloosa was released without much fanfare last September, enjoyed only a brief and limited cinema release, and therefore was little seen. I blinked and missed it completely. Its swift release on DVD is, therefore, especially welcome, because this is a hell of a film, a terrific western, well-played by an exceptional cast, that knowingly alludes to classics of the genre – principal among them, Rio Bravo, My Darling Clementine, 3.10 To Yuma, Ride The High Country and, of more recent vintage, Kevin Costner’s Open Range, which it in many ways it closely resembles.

Harris and Viggo Mortensen, so good together in David Cronenberg’s A History Of Violence, are Virgil Cole and Everett Hitch, itinerant frontier lawman who make their living cleaning up lawless towns, bringing order to the rowdy west. Virgil wears a badge, calls himself a marshal, though we are not sure who’s elected or appointed him. He’s a hard man, with a psychotic temper. Hitch, a former cavalry officer, has given up fighting Indians to ride with Virgil as his deputy. They’re mercenaries, basically, guns for hire – although Cole bristles at the suggestions they are professional killers. “I don’t kill people for a living. I enforce the law,” he says, testily. “Killing is sometimes a by-product.”

When the film opens, Cole and Hitch have just been employed by the good citizens of the New Mexico town of Appaloosa, which is being terrorised by a despotic local rancher, Randall Bragg (a wonderfully evil Jeremy Irons). The reason Appaloosa needs a new marshal is because in pretty much the movie’s opening scene, Bragg has blown the old one out of his saddle, two of his deputies also biting the dust. Cole knew the murdered lawman and vows to bring Bragg in, even if it means gunning down everybody who might stand between them. Complications of several sorts ensue when Cole falls for pretty widow Allison French, newly arrived herself in Appaloosa and by some distance not the prim type she initially seems.

The film’s pace is laconic, its narrative rhythm relaxed enough for us to fully enjoy the tangy relationship between Cole and Hitch, though there is no shortage of action as the film saunters towards an inevitable final showdown via series of well-mounted vignettes and explosive set-pieces – a daring arrest, a dramatic face-off between the lawmen and Bragg’s desperadoes, a fraught attempt to get Bragg to the state prison, a kidnapping, a fiery encounter with marauding Apaches and best of all a superb gunfight, Cole and Hitch taking on Bragg’s own imported regulators, the Shelton brothers, led by a typically menacing Lance Henriksen. Like the best Walter Hill gun battles, it’s a bloody encounter, over in a flash, everyone catching at least one bullet in the brief mayhem.

“Everybody could shoot,” says Cole, counting the dead, in sombre appreciation.