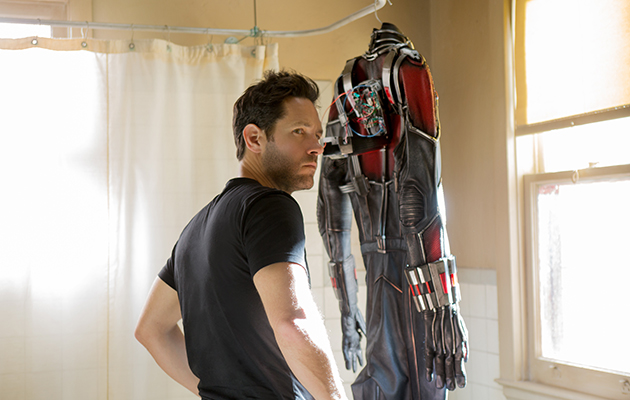 Ant-Man is not a film that needs to be made – it does not enhance the sum of human existance, nor does it offer a bold new direction for an overplayed genre. But such is the current clout of the Marvel Cinematic Universe – The Avengers sold $1.5 billion in tickets globally in 2012, making it the third-highest-grossing movie of all time – it seems that anyone with a funny name and a fancy costume is potential box office gold. According to an interview with Bloomberg Business, Marvel Studios’ Kevin Feige revealed they have a grand plan for comic book movies stretching to 2028.

The appeal, presumably, is that the big earners can help prop up less well-known properties. Presumably, Marvel will have been emboldened by the success of last year’s unexpected hit Guardians Of The Galaxy – a film full of unknown characters and no major star in a lead role which ended up taking $700 million worldwide – and started truffling around the superhero cupboard looking for similarly diverse superhero fare. Like Ant-Man.

In fact, this project began eight years ago, under the auspices of Shaun Of The Dead director Edgar Wright and Joe (Adam And Joe) Cornish. Shortly before film was due to start last year, Wright and Cornish abruptly left the project; a new director, Peyton Reed, was parachuted in. The result is a fairly standard origin story involving out of control science and greedy corporate baddies with an Average Joe caught in the middle. In this instance, he is reformed con Scott Lang (Paul Rudd), who becomes involved in the schemes of millionaire scientist Hank Pym (Michael Douglas). Lang is shrunk via a special suit and do battle against Hank’s former protégé, Darren Cross (Corey Stoll), who plans to use Pym’s gear for Bad. Along the way, Lang bonds with Pym’s army of specially trained telepathic ants. The film’s climactic battle takes place aboard a Thomas the Tank Engine model train set.

You can perhaps see the wacky promise that appealed to Wright and Cornish. In fact, one of the pleasures of Ant-Man is trying to work out which bits of Wright and Cornish’s original plan remains. Scenes with the telepathic ants have a warm, Aardman-like quality to them; the model train sequences recall Adam and Joe’s own toy movies. In these playful moments, it feels as if we’re watching a sly spoof of a typical Marvel film; but then the film reverts to more predictable blockbuster fare. “Clichés abound: “It’s a trial by fire, Scott. Or in this case: water.” CGI heavy scenes set in “the quantum realms” are delivered with po-faced earnestness.