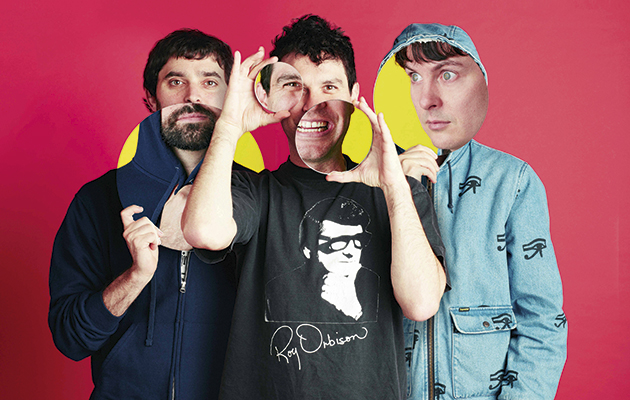 Travellers passing through Baltimore Airport heading home for Thanksgiving on November 25 last year may well have heard some strange new pop music coming from the airport’s speakers. As discreet promotion to herald the arrival of their latest album, one of Baltimore’s best-known experimental jam-bands, Animal Collective, were pumping out their 11th long-player on a loop throughout the day to anyone who cared to listen. Quite what effect this had on unsuspecting travellers is not known – it surely drove staff nuts by the end of the day – but the fact that an Animal Collective record was deemed suitable to be aired non-stop in a public building on the eve of a national holiday gives some indication of the character of the music. No two ways about it, really: Painting With is as close to conventional pop as Animal Collective have come.

This should come as a relief to anyone turned off by their last album, 2012’s Centipede Hz, which veered away from the lush tropical vistas of their 2009 high-water mark, Merriweather Post Pavilion, to reveal a gnarly and unvarnished side to the band. Bristling with restless energy and almost deliberately perverse, Centipede Hz seemed to ask questions of those new fans seduced by the charming psychedelia of Merriweather…, perhaps warning admirers that Animal Collective are not just here for the blissful moments in life. One only has to peruse their 15-year discography to hear them evolve with each release, shapeshifting into a slightly different entity, seldom repeating themselves as they look for new ways and forms of expression.

But Painting With is striking because it manages to distill the essence of Animal Collective into 12 slices of bite-size psych-pop that have the punchy immediacy of a Ramones album and which find Dave Portner (Avey Tare), Noah Lennox (Panda Bear) and Brian Weitz (Geologist) – regular collaborator Josh ‘Deakin’ Dibb sat this album out – adhering fairly strictly to a set of ideas designed to take the group out of their comfort zone. There are no ambient pieces or improv jams, for example, and no songs over five minutes: most zip by in three minutes, into which Animal Collective cram their usual quota of experimentation with heightened cartoon exuberance to make some of the most exciting music of their career. Portner cites old-school hit factory Tin Pan Alley and Ray Davies as influences on his more concise songwriting for Painting With, while Lennox felt the Cubist notion of distorting and rearranging reality could be applied to these songs – an obvious idea that’s always hovered around Animal Collective, and which they make explicit on this record. Hence opener and lead single “FloriDada”, a gurgling Ren & Stimpy eulogy to the Sunshine State stacked with rippling Beach Boys harmony, nursery-rhyme melody and a sample of The Surfaris’ classic “Wipe Out”. This first new track in four years places the nimble vocal interplay between Portner and Lennox to the fore – the pair wrote parts for each other and recorded the vocals sitting high up on pedestals to better project to one another – and this is repeated across the album on “Hocus Pocus”, “Lying In The Grass”, “Spilling Guts” and “Summing The Wretch”, one singer completing the other’s phrase or shadowing the lead in a pacey game of Django Django’s doo-wop ping-pong.

Animal Collective have never had trouble locating their inner child – much of their appeal lies in their ability to conjure a naïve sense of new-age wonder – and their tactical regression this time has fuelled this positive approach to pop. Naturally, when they entered the storied EastWest Studios in Los Angeles in July last year to record Painting With – using the room where Pet Sounds took shape – they set up a baby’s paddling pool in the studio and projected a loop of dinosaur films on the wall. As with the sessions for Merriweather, the three had sent demos and ideas to each other before recordings began, with Lennox and Portner bringing eight songs apiece to the studio. Both artists had toyed with the pop form and explored succinct songwriting on their recent solo albums as Avey Tare’s Slasher Flicks and, more successfully, Lennox’s Panda Bear Meets The Grim Reaper, but here it’s Portner who delivers the niftiest numbers.

“The Burglars” could be the Happy Days theme collapsing down a wormhole: “When I was young my parents yelled beware of the ivory man that will steal and sell”, Portner trills, as a mangled zurna spills over breakbeats before the honeyed chorus kicks in. On the sentimental “Bagels In Kiev” he loosely addresses the situation in Ukraine – “These days I’m not so sure who is getting along or if they were before… it’s like we can’t escape all the noise and violence”, he sings, adding: “Bagels for everyone, that’s the kind of thing you would’ve wanted” – as Christmas synths swell to a dreamy crescendo. Both songs clock in well below three minutes yet are so intricately structured, using layers of modular synth patterns, samples and patchwork rhythms, that it takes several listens to register all the activity. That the band carve clarity out of such chaos merely underlines their psychedelic credentials, and rather shows up fellow lava-lamp botherers like Tame Impala and UMO as modern-day Totos.

Indeed, submerged in the cosmic funk of “Vertical” is an analogue belch played by one John Cale, while sax man to the stars Colin Stetson appears on “FloriDada”, though both turns seem so nuanced you wonder what was actually added, especially when a sample of a trumpet then appears in “Lying In The Grass”. Having never found a use for brass on their previous albums, Portner was determined to make room for it here.

The abrupt nature and fizzy disposition of Painting With might cause some long-time AC acolytes to splutter on their bong, but why would this extraordinary band want to remake Merriweather…? Label them Dada, Cubist or pop art as you wish – each tag fits – but like true postmodernists, Animal Collective are making it up as they go along, and they’re never boring.

Setting out, did you give yourselves any guidelines?
We had three ideas that we clung to the whole time. We tried to do something that had really short songs, and we spoke about basic plodding rhythms, and we wanted to do something different – or special – for us with the singing. It’s typical for us to throw up a bunch of ideas like, yeah, we wanna do something that makes me think of ballet! But by the time you’ve finished recording it, it hasn’t really turned out that way.

How did you adhere to this idea with the vocals?
For the first time, Dave and I both wrote singing parts for each other to sing, and it had to be that way because of how precise the songs are. The two vocals dance around each other in this weird way, and if you lose one of the voices in the song, it just doesn’t work in the same way. Writing music for two voices took a bit of work for both of us. “Lying In The Grass” is a good example of this in one of my songs, and then “FloriDada” or “Vertical” for Dave. For this record, Dave and I had wanted to do nine songs apiece and it ended up being eight apiece, but that turned out to be more than enough. I started writing for the record on January 1st of last year. I spent a month and a half writing and then sent demos to the other guys in late February/March.

How does the album title relate to the music?
In the beginning we didn’t have painting as a target but we found, as we were making the record, we were often talking about it in visual terms, often with painting references, like, this sound feels like a splat of paint, or I wanna do a part that feels like taking a paintbrush and putting a colour all over the song. I should say that we don’t have a grasp of the more technical side of music so we’re often forced to translate ideas in more figurative or visual ways. This time, for whatever reason, we talked about paint a lot. I think we were even going to call the record (i)Paint(i) at one point. The Duchamp stuff is more Dave’s thing – the Dada and “FloriDada” connection is pretty direct. I wasn’t that knowledgeable about the Dada stuff until talking to these guys about it after the song. My favourite is the Cubist reference. Cubism often involves a distorted, rearranged version of reality and I feel like a lot of these songs feature elements of traditional songwriting or traditional songform but are kind of rearranged or distorted in funny ways.

What was your brief for John Cale when he joined you in the studio?
There was a sound in “Hocus Pocus” that Brian was playing and we all liked the part but weren’t sold on the quality of the sound in terms of how it related to other sounds in the song. Dave’s sister was working for John doing live visuals, and the part was kind of like a stringy-type instrument, so we wondered if John would be down to come in and use his viola and recreate the part. That didn’t end up working, or we didn’t use the viola stuff he did, but he also brought in some electronics, like a sampler and other things, and we tried a whole bunch of things and talked about the song and hung out for half a day. It was super cool. [Cale’s contribution appears on “Vertical”.]

You invited saxophonist Colin Stetson to play on the record, too, on “FloriDada”.
We were into this idea of using an instrument or a quality of a sound that we hadn’t really found a way to do so before, in a way that we found pleasing. Saxophones – and brass in general – is an element we’ve always found challenging to fit into our music, so it was a fun challenge to do that this time. But we’re all big fans of Colin and like the way he uses his instrument idiosyncratically. He’s a good traditional player but he also has a unique way of using the instrument. We knew we wanted this specific part of the song to feature saxophone, so we ran the part and he set up his saxophones, three of four of them – some of them are really big – and he ripped for an hour. He was looping and playing over it, he did seven or eight layers of stuff. Then we chose bits from that.

How much did those Golden Girls samples cost for “Golden Gal”?
Too much. Yeah, that one stung a little bit but it was an important part of the song, so off we go.