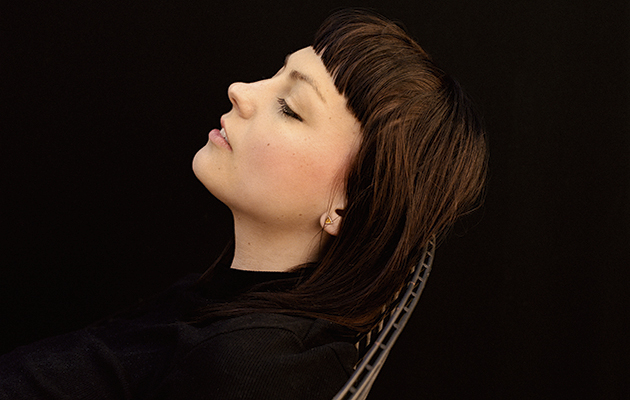 Angel Olsen has suffered the disservice of being pegged as a tragic figure more than most songwriters who happen to be women. Her voice beams a raw, natural power that seems to pre-date electricity, flickering like an oil lamp. Her lyrical references to Hank Williams cement the perception of her as an old-timey figure ill-equipped to deal with the demands of the present, and the knowledge that she was adopted only adds to the assumed pain and fragility in her work.

While it’s true that Olsen, 29, can match Leonard Cohen for gravity (see “White Stars”, from 2014’s Burn Your Fire For No Witness), and that she cut a spectral figure on her earliest cassette releases, she is in fact funny and self-aware, mocking assumptions to the contrary on her sparsely populated Twitter account. “And don’t forget to add ‘complicated mess of being a woman’ to your article because your editor told you to,” she wrote recently, citing the press release for her third studio album.

The Missouri-raised songwriter unveiled My Woman with no fanfare or context; just a video for a song called “Intern”, in which she wears a silver wig and plays a celebrity going through superstardom’s hammy spectacle. Over dewy synths and a glowering bassline, she sings about the pressure to be someone, and to make lasting connections, declining to clarify whether she’s singing about a relationship or her own work (or, indeed, both). But she does outline the steadfast motive behind her work that’s been there since her 2012 debut, Half Way Home: “I just wanna be alive/Make something real.” For Olsen, “real” is different from tweedy “authenticity”, a distinction she wields to great effect. She sings about picking up the phone and falling in love, breathily swearing “it’s the last time”. But there’s seldom a last time, as she knows: Burn Your Fire’s misanthropic “Unfucktheworld” found only emptiness after what she assumed was her final relationship. “Intern” turns out to be the first song on My Woman, and sets the stage for a spirited melodrama about the search for meaning.

Each of Olsen’s records to date has forged a giant leap from what came before. She brought the shadowy melodies of 2011 tape Strange Cacti out into the light on Half Way Home, and pushed into rockier territory on the garage-inflected Burn Your Fire. My Woman is, in spirit and often in sound, Olsen’s glam record. She employs a campy swagger to make clear that she’s not necessarily the people in her songs, who are hopelessly devoted to feeble men – and maybe an unengaged public. “I would watch you fold my heart away,” she sings on “Never Be Mine”, whose brisk Hank Marvin stateliness harks back to when deference to men was par for the course. But no matter how much her heroines prostrate themselves, Olsen’s sincere quest is still clear: for love that’s “never lost or too defined to lose the feeling of an endless searching throughout”, as she puts it so beautifully on “Not Gonna Kill You”, a Morricone-inspired Western that plays like a race to outrun cynicism.

Olsen pushes her voice further than ever before on My Woman, which plays like an actress’ showreel. “Shut Up Kiss Me” is a sexy, screwball garage song that could be sung by Blanche DuBois at breaking point, Olsen gritting her teeth as she declares, “at your worst I still believe it’s worth the fight”, before vamping through her ultimatum: “Shut up! Kiss me! Hold me tight!” On “Give It Up,” she seems to dramatically raise a hanky to her brow as she describes the pain she feels in proximity to the guy who has denied her, against guitar that recalls Courtney Barnett’s burly softness. She sounds possessed by the end of “Not Gonna Kill You”, pushing into non-verbal transcendence that sails over a churning psychedelic groove. It bridges the first half of the album – shorter, poppier songs – with its second half, where Olsen stretches out into wilder forms and unexpected textures.

“Sister” is the record’s centrepiece, an almost eight-minute declaration of Olsen’s belief in love’s transformative potential. “I want to go where nobody knows fear,” she yearns, sounding anxious and bold: “I want to follow my heart down that wild road.” Her gentle country ballad lilts with an outlaw twang, but cracks wide open as she repeats the line, “all of my life I thought had changed.” It’s unclear whether she’s powered by regret or relief, but it’s deeply affecting either way; as she unleashes meteor showers of wordless incantations, she sounds like Stevie Nicks fronting Crazy Horse, riding a rugged solo. The (pre-Stevie) Fleetwood Mac vibe continues into “Those Were The Days” and “Woman”, which share the voluptuous R’n’B shimmer of “Albatross”: all lightly jazzy drums and Rhodes groove, with Olsen singing high and gauzy. “I dare you to understand what makes me a woman,” she challenges on the latter, heralding another self-possessed solo.

My Woman is also a dare to understand Olsen as an artist: one who challenges assumptions about female artists as confessional autobiographers; who – like all the best country singers – uses humour to bolster sincerity. Her ambitious third record marks another giant progression in an already distinguished career, and offers provocative thoughts on sacrifice and identity that should long outlast its 48-minute runtime. “Baby, don’t forget, don’t forget it’s a song,” she sings on final song “Pops”, to a distant piano. “I’ll be the thing that lives in the dream when it’s gone.”

Q&A
Do the wigs connote a particular character?
I went with the silver one as a nod to Bowie, glam rock. Friends have told me how my genuine self is more present in these films. There has been a curiosity about the wig, which got me thinking people really don’t pay attention to your poetic intent. But that’s what makes it fun: finding hilarity in statements I didn’t know I was making. It was really out of a need to make light in visuals what could be so heavy in words.

How do you interpret the title?
It’s more of an attitude. It’s flirtatious and possessive, maybe even degrading but also it could be very empowering and less about womanliness and more about owning up to your actions and thoughts.

What mindset were you in while making it?
On Burn Your Fire I thought I learned what isolation was and could reflect it, and maybe I did some of that… This record feels like actual change. Maybe part of the struggle was that I just wasn’t sure if this whole indie country glam thing was my gig because it’s not always the dream to sit within the structure I’ve created. Then I realised I couldn’t stop it, not yet. And what a pleasure, to be transparent and unashamed and to write. Even if the audience misunderstands my intent sometimes, and I gotta redefine it – or embrace the fact that I don’t need to, it’s a blessing to insert some catchy melody with something that’s real to me, that might reach someone else, and remind them that they’re not the only one.
INTERVIEW: LAURA SNAPES