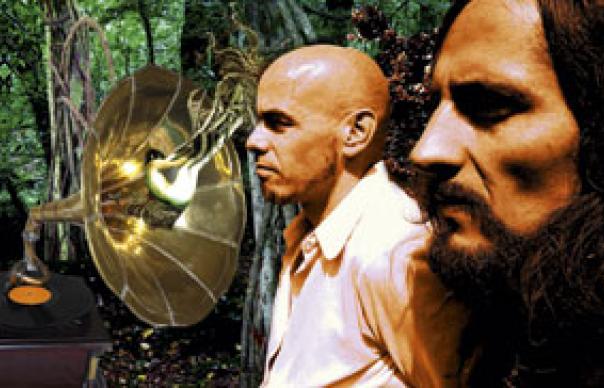 As pop music develops an ever expanding back catalogue, even the most dedicated music fan needs some help in navigating a way through its myriad vaults. It’s here that the DJ – the talent scout, the tastemaker – becomes more important than ever. We need obsessive crate-diggers who spend their days rummaging through second-hand vinyl shops from Nashville to Addis Ababa, as a pith-helmeted colonialist might hack through jungles in search of valuable minerals.

The Amorphous Androgynous, a DJ/producer duo comprising Garry Cobain and Brian Dougans, emerged via a different path to many other crate-diggers. Instead of the usual rare groove/acid jazz route, they started out in the late 1980s as Humanoid and had a big pop-rave hit with “Stakker Humanoid”, before mutating into The Future Sound Of London, a more cerebral, “progressive techno” outfit. Amorphous Androgynous was initially just one of their many DJ monikers, and in 1997 they fronted a two-hour mix on Kiss FM entitled “A Monstrous Psychedelic Bubble Exploding In Your Mind”. It mixed Barbra Streisand’s “Evergreen” with “Silver Apples Of The Moon” by electronica pioneer Morton Subotnick and segued into Jonathan King’s “Everyone’s Gone To The Moon” while slipping in brief quotations from Charles Bukowski reading from one of his own novels.

Soon the Monstrous Psychedelic Bubble sessions – in clubs, on radio, record and podcast – started to become a minor phenomenon. Here, 50 years of pop history was rearranged into a fantasy world in which psych-rock nuggets, acid folk, easy listening, world music, prog and primitive electronica are mixed with the odd pop wildcard; knitted together with quotations from assorted psych shamen. Noel Gallagher came across a comp by chance, snapped up dozens of copies and gave them as Christmas presents to friends, including Paul Weller and Kasabian. Gallagher, who invited Amorphous Androgynous to remix “Falling Down” and DJ at Oasis after-shows, claims it forced him to look at pop in a different light; and Cobain says hundreds of fans have said the same.

This volume is a typically eclectic and eccentric collection: nearly 50 tracks, linked by between-song narration from Timothy Leary. Cobain’s rather mystical idea that “the past, the present and the future are all with us at once” starts to make sense, as half a century of recorded music is gleefully reshaped.

This is a world in which The Moody Blues’ 1968 belter “The Best Way To Travel” invents both Syd Barrett and Blur, and where Donovan gets deeper into spiritual folk-jazz than Nick Drake ever did (“Get Thy Bearings”). It’s a world where “The Beast” by Aphrodite’s Child becomes a terrifying slice of gothic funk, where Steve Winwood and Ennio Morricone become fearsome Hammond jazz gods, and where ragtime pianist Dick Hyman is turned into the godhead of electronica. There are names often dropped by in-the-know hipsters (Linda Perhacs, Amon Düül) and rare groove purists (Rotary Connection, Dorothy Ashby), but Dougans and Cobain also smuggle in recent releases by the likes of Noah Georgeson, Supergrass and Weller.

This will lead you up countless new pathways and get you into artists of whom you’ve barely heard (Golden Animals? The Animated Egg? Get in!). Even the most dyed-in-the-wool rock fan with an aversion to the mix-tape will find something compelling here.
John Lewis

Q+A Garry Cobain of Amorphous Androgynous
What’s the distinction between Future Sound Of London and Amorphous Androgynous?
At the end of the ’90s, music was quite genre led – indie, dance, ambient – and we’ve always been unhappy with that. We really wanted to break open the experimental door, and that needed a name change.

How do you define psychedelia?
The word has been around for hundreds of years as a spiritual definition by shamen and anyone looking for transcendental experience. So, for me, part of the ethos has been to reclaim it from the ’60s and drag it into a timeless, genreless, sound dimension, to activate some kind of freedom to experiment.

How difficult are these tracks to license?
It can take ages. We can play anything we want on our radio broadcasts, but with CDs you have to haggle. With recordings of spiritual leaders, I’ve had to build personal relationships with ashrams in India, or whoever owns the copyright, trying to convince them I wouldn’t be taking the words out of context. We treat these compilations with the same love and care we show our own records!
INTERVIEW: JOHN LEWIS