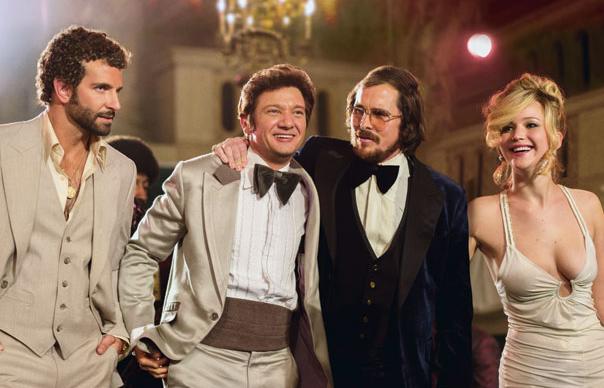 American Hustle has a lot going on with the hair. Look, here’s Christian Bale’s paunchy con artist sporting an oily-looking comb-over. Amy Adams, as his mistress, can be seen modelling some corkscrew curls. Federal agent Bradley Cooper, meanwhile, has a tight perm. This is the 1970s, a time of exciting hairstyles – but also one familiar to Uncut readers as a period of prominent wiseguy activity, heavy on the whackings and knowing voiceovers.

Indeed, for his follow-up to the largely wretched Silver Linings Playbook, David O Russell conspicuously evokes comparisons with two great Scorsese movies – GoodFellas and Casino. Look, there’s even a cameo for Robert DeNiro (wearing what might well be Marty’s specs) as a high up in the East Coast mob.

“Some of this actually happened”, reads an opening caption, but Russell is clearly operating under creative license here. The film is very loosely based on a undercover sting operation in the late Seventies called ‘Abscam’, run by ambitious FBI agent Richie DiMaso (Cooper) who recruits con artists Irving Rosenfeld (Bale) and Sydney Prosser (Adams) to take down people like New Jersey Mayor Carmine Polito (Jeremy Renner), with his links to some interesting people in the Atlantic City casino business.

The vibe is full-tilt whacko. Bale and Cooper – two actors I normally can’t stand – are both well suited to the material, amping up their characters increasingly preposterous sense of their own self-worth. Bale even looks like he’s having fun for once. But the two best performances come from Amy Adams and Jennifer Lawrence. Is there a better actress currently working in movies today than Amy Adams? Here, as Sydney (and her English alter ego, Lady Edith Greensly) she is terrifically mischievous, with a sociopathic glint in her eye, her crooked smile, never quite letting you know what she’s thinking. Meanwhile, Jennifer Lawrence – as Irving’s wife Rosalyn – is a whirlwind of blonde highlights, Swedish nail varnish and passive-aggressive one-liners. Nothing is particularly low key; dysfunctional screwball comedy rules the day.
Michael Bonner