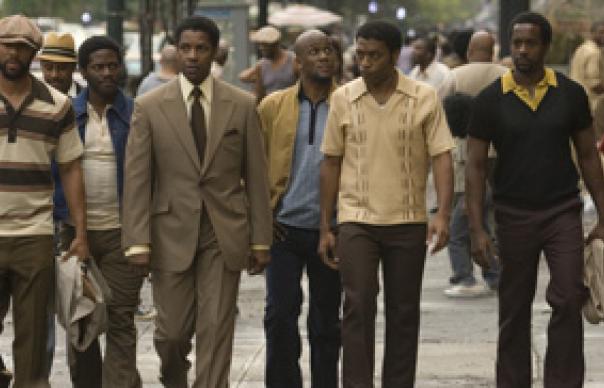 It’s pretty amazing that this tale of the dogged pursuit of New York crime boss Frank Lucas (Washington) by NYPD officer Richie Roberts (Crowe) in late ’60s/early ’70s New York has never made it to the screen before. After all, that period is something of a golden age for cop thrillers (Dirty Harry, Bullitt, The French Connection, Serpico) so it’s not hard to imagine someone like Lumet or Friedkin shooting this, with Pacino and Yaphet Kotto or Harvey Keitel and Richard Pryor as, respectively, Roberts and Lucas.

This true story certainly has the kind of operatic sweep suited to the movies. From ’68 to ’76, Lucas was the biggest heroin dealer in Harlem, smuggling kilos and kilos from Vietnam into the US inside the coffins of dead servicemen. At the peak of his career, he claims to have grossed $1m a day selling his brand of heroin, Blue Magic, on 116th Street. Lucas was also a family man who gave his cousins key roles in his outfit; a man of the people who each Thanksgiving would hand out turkeys to the poor; a socialite who had front row seats at the ’71 Ali/Frazier bout at Madison Square Garden.

By contrast, Roberts is barely keeping his head above water. His marriage has fallen apart and he’s in a legal fight for access to his son. When he and his partner hand in $1m found during a stake out, he sets a moral high bar among the largely corrupt NYPD, and is ostracised by his peers.
It’s a big old story, and with actors of the calibre of Washington and Crowe in the lead roles, Ridley Scott is happy to let it unfold leisurely. You can’t help but be reminded of Michael Mann’s Heat.
Crowe and Washington are extremely charismatic here; particularly Washington, whose man-of-the-people charm disguises a ruthless, shark-like drive that occasionally manifests itself in moments of shocking violence.