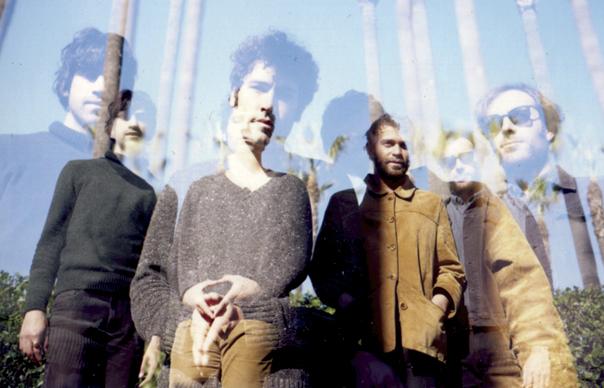 Sounds of the ’60s on blissed-out second…

One of three instrumentals which snake their way through Allah-Las second album, “Ferus Gallery” takes its name from the Los Angeles centre for contemporary art which, it transpires via a little light Googling, closed its doors in 1966.

The date of its demise might be coincidence, but the evidence suggests otherwise. Culturally speaking, 1966 represents the line beyond which this LA quartet dare not tread. Their highly-regarded 2012 debut drew obsessively from a wellspring of mid-60s sources. Mostly it was in thrall to fuzzy US garage-rock, but it also added surf-pop, incipient psychedelia, primitive beat music and The Byrds’ trebly jangle to the mix. There were overt echoes of The Seeds, The Ventures and The Animals, but also the occasional Hispanic flourish and bossa nova rhythm.

Little of any great significance has changed on the follow-up. Two years may have passed, but the “voices carrying through the Canyon” on opener “De Vida Voz” – a Love-esque mix of halting minor chords and rattlesnake rhythm – are still calling from a very specific musical and geographical location. The closest Allah-Las come to sounding contemporary here is, ironically, on a cover of The Frantics’ obscure early 60s instrumental “No Werewolf”, which in their hands becomes a pioneering foray into what can only be described as kraut-surf, the spindly guitar licks welded to a tough, undeviating rhythm.

But really, from its title on down, Worship The Sun is a second slice of impeccable Californian retro-fetishism which subverts ridicule by achieving so spectacularly what it sets out to do. The production, once again overseen by Jonathan Wilson producer and Beachwood Sparks member Dan Horne and Ty Segall cohort Nick Waterhouse, is immaculately imperfect. The performances are raw and just the right side of sloppy, while the drawled vocals – shared between all four – are appropriately offhand and faintly malevolent when required, notably during the call and response of “Had It All”.

There is some evidence of creative evolution. Piano, pedal steel and vibraphone are sparingly utilised, and while Allah-Las sometimes felt like a live set hastily brought into the studio, this time as much emphasis is placed on the songs as on the painstakingly reproduced sound.

“Nothing To Hide” is a deliciously sun-warped filigree which takes its compass reading from The Turtles “You Showed Me”, the vocals as fey and feather light as Bobby Gillespie in his pre-“Loaded” days. The title track is a master class in stoner indolence – “Don’t worry about the time” – while the sweetly clacking bossa nova rhythm and fluid guitar lines evoke the listless loveliness of The Byrds’ “Dolphin Smile”. The tremendous “Better Than Mine” injects a welcome lick of pace, a country-rock gem which hurtles along on glistening waves of pedal steel.

Nothing on Worship The Sun is as obviously pretty as the limpid C86 jingle-jangle of “Vis A Vis” from their debut, although “Yemeni Jade” is blissfully beautiful, a meandering instrumental featuring pedal steel, tom-toms and a palpable aura of loss. More typical is the perceptible hardening of Allah-Las’ resolve. “Every Girl” is thuggish early Stones with a hint of the New York Dolls, while the chirpy “ba-bas” on “Buffalo Nickel” might evoke the west coast idyll of The Beach Boys and The Mamas & The Papas, but the riff is pure ’66 Velvets, awkward and snagging. Elsewhere “501-415” nods to the dawn of British psychedelia, evoking the shadowy sing-song style of early Pink Floyd.

If there’s a faint veil of disappointment hanging over all this excellence, it’s that Allah-Las haven’t built more adventurously on the foundations of their debut. Lyrically there’s few advances on the unreconstructed sexual politics, bravado and blissed-out reveries of the first album, while these short songs (the 14 tracks run to barely 40 minutes) rarely challenge the orthodoxies of their obvious influences. There’s not, in truth, much evidence of vaulting ambition here, but then sun-worshippers don’t need the sun to evolve. They simply ask that it keeps on shining.
Graeme Thomson

Q&A
MILES MICHAUD
How would you describe the record?
A natural progression. We were listening less to abrasive garage rock and a little bit more to late 60s progressive rock, and that possibly came out naturally in the way the album sounds, but it still has all the same elements and still sounds very much Allah-Las. We’re pleased with the way it changed, and the way it stayed the same as well.

It seems more unified than the first one.
This time we arranged and worked out songs in the studio, which was new to us, and enabled us to be experimental. But it’s certainly not polished. There are flubs all over the record!

Does the retro tag get on your nerves?
It goes both ways. You can be relegated to being knock-offs or revivalists, but all art draws influence from the past. It’s a good thing to be able to bring elements of the past into the future. I don’t have a problem with people thinking about that when they’re listening, but I wouldn’t want them to think it’s something that’s been done or can’t be done anymore. It’s just an aesthetic choice – all rock and roll is basically derived from the 50s. The only real guiding light we have is that we make music that we like. INTERVIEW: GRAEME THOMSON