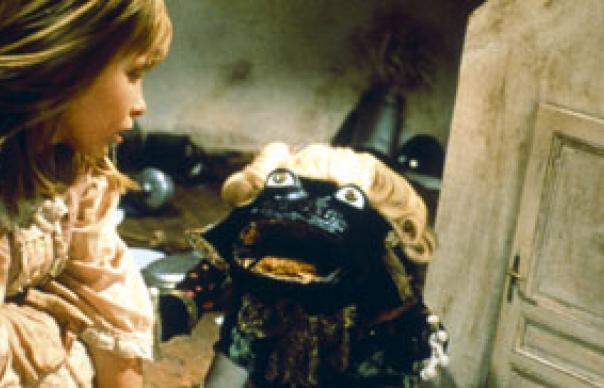 Filmed in a bakery in Prague in 1988 with money practically smuggled into the country by Channel 4, Alice is as twisted a version of the Lewis Carroll tale as has ever been made. In many ways, it’s a miracle it ever got made at all. Czech filmmaker Jan Švankmajer’s surreal and subversive stop-motion animation films had periodically been banned by the Communist state since the ’60s. But by employing a complex combination of smart business practices and subterfuge, and working patiently indoors with a crew of five for a year, he managed to sneak Alice into the West shortly before the Iron Curtain came down for good.

Jan Švankmajer’s film begins with a sweet blonde girl (Kristýna Kohoutová, the only human actor in the film), mouthing the words: “Now you will see a film made for children… Perhaps.” Švankmajer’s intention to operate one step removed from Carroll’s original text is implicit from the start – whereas most adaptations begin with Alice sleepily reading in the garden, Švankmajer’s Alice is stuck in a junk room, surrounded by a clutter of jars, stuffed animals, skeletons, teacups and dolls. In a glass case in one corner, a stuffed white rabbit slowly comes to life and leads her down the rabbit hole – or in this case, across a ploughed a field and through a school desk drawer – so that her adventures can begin.

And what a rabbit. Instead of a cute, anthropomorphic bunny with twitchy nose and fluffy tail, this white rabbit is like the re-animated dead, with sewn-on button eyes and sharp, yellow teeth. It has a bodyguard of freakish half-skeleton animals and keeps its pocket-watch inside its chest. Every time the rabbit removes the watch to check the time, sawdust leaks out, which the rabbit licks up, like a vampire feasting on its own blood. It’s no surprise that this creature later moonlights as the Queen Of Hearts’ willing – and energetic – executioner.

Švankmajer had been a member of the Surrealists since 1970, but some of the treatment he dishes out to Alice is more cruel than absurd. She repeatedly hits her head against the ceiling as she grows too fast after drinking magic ink, or falls flat on her back as doorknobs come off in her hand. The film is laced with the sort of acidic visual humour – the caterpillar is made from a sock and sews up its own eyelid when it goes sleep – that Terry Gilliam brought to the mainstream through Monty Python.

As you might expect, then, there’s little of Carroll’s whimsical wordplay in evidence – the film has no dialogue and is only sparsely narrated by Alice. Some of the more humorous characters, like the Cheshire Cat, have been excised completely. The overall tone, then, is so dark it makes Tim Burton’s recent version resemble a pantomime (indeed, Burton’s Beetlejuice or even Henry Selick’s Coraline are more favourable comparisons). Although it is often surreal, it is not plotless: there are no Lynchian non-sequiturs or narrative dead ends. Each bizarre episode – and some are very bizarre indeed – leads on quite naturally to the next, as the film proceeds under its own ghoulish internal logic.

The animation itself is fabulous. Because of the constraints of the filming locations, most of the narrative takes place inside, in a series of cramped cellars that adds a palpable sense of claustrophobia to the already supremely weird proceedings. At times, Alice’s nightmare becomes positively Kafkaesque, as when a puppet Mad Hatter and a clockwork March Hare find themselves repeating the same fruitless behaviour over and over again. “I think it worked quite well, though not entirely as I expected,” says Alice at one point. A line that seems a satisfying motto for the film itself.