Shannon And The Clams – Year Of The Spider 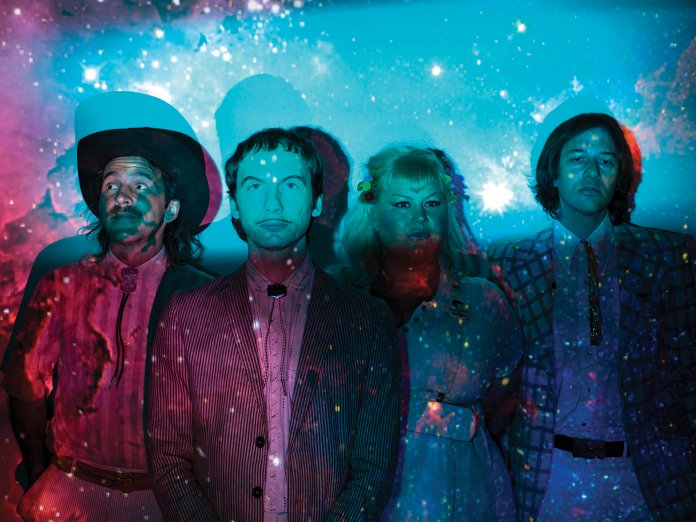 Shannon And The Clams are part of a decades-long tradition of musicians who have channelled bygone sounds and imagery for new audiences. The best of these acts don’t engage in rote resuscitation or simple tributes. Instead, they bring a rough-hewn edge, a wild experimental spirit or – crucially – both of those things to the act of revivalism. Amy Winehouse, The White Stripes and The Black Keys may be the most visible examples, but bands like Shannon & The Clams, and The Detroit Cobras before them, offer an equally rich and punchy take on tradition – with gale-force women at the helm, no less. They deftly stitch together decades and genres with nary a visible seam. They’re specialists, but they are also omnivorous, updating tried and true templates with a thoroughly modern, anything-goes attitude.

But along the way, such groups, particularly those with a ’60s focus, have been affixed with a particular designation: retro. In a word, it relays an abiding sense of nostalgia, and a reverence for tradition. But it also discounts the singular pizazz, and the distinctive innovation, involved in updating older sounds for modern audiences. Retro isn’t bad, per se, and neither is throwback. But each suggests an artist lost in the past, one ambivalent about the world around them. And with Year Of The Spider, Shannon And The Clams look decidedly toward the future.

Bassist and vocalist Shannon Shaw and guitarist/singer Cody Blanchard, along with drummer Nate Mahan and keyboardist Will Sprott, came together more than a decade ago in the Bay Area of northern California after meeting through art school. After releasing largely DIY albums on tiny regional punk labels, and then the Sub Pop subsidiary Hardly Art, they signed with Dan Auerbach’s Easy Eye Sound for 2018’s Onion, their most mature and fully formed collection, but one that only hinted at where they’d go with Year Of The Spider.

With it, they have created a multitudinous pop album that threatens lasting significance. By blending their previous ’60s focus on girl group, classic R&B and garage-pop with post-’60s forms like psychedelia, glam and country-rock, they offer a stylish, seamless yet unpredictable listen, one that is threaded with palpable heartache, earworm melodies, dynamic vocal performances and sparkling instrumentation. Each compact song feels like a revelation, unfolding like the pages of a flipbook, animating movement and story at a focused, rapid clip.

It’s also the band’s best sounding album, recorded with clean, clear fidelity by Dan Auerbach, though the group remain loyal to their underground DIY roots through a menagerie of off-kilter textures and accents, and Shaw and Blanchard’s signature vocals. He demonstrates a lilting falsetto while she traverses haunting incantation and formidable growl effortlessly and with evident fire, like Wanda Jackson or Brenda Lee at a sweltering basement punk show. And though the band now open for larger acts such as Greta Van Fleet, they still transmit the physical immediacy and spiritual connection of an underground gig in any setting. Year Of The Spider retains that same spirited, often kinetic energy – an authentic rendering of the band onstage, despite slicker production.

The album opens like a Tarantino film. A brooding guitar solo introduces Shaw’s velvet singing, which is plagued by a looming choice. “Do I wanna stay in the place I was half raised?/Haunted by the days of being young?/Or do I wanna go to a place that I don’t know?/Take a chance and see if there still will be a me?” she asks, setting the tone for a song and an album that probes existential crisis, critical judgements and imminent tragedy. Shaw’s father was diagnosed with cancer around the same time she began writing for the album, and the pain and uncertainty of that new reality introduces a fear and fragility not heard before from this group. “Open up, open up/You’re still here/Weary mind, bleary eyes/You’re not vanishing,” she pleads on “Vanishing”, a form of solace and conviction.

Shaw peels back her power on All Of My Cryin’, a soulful psych-pop missive where she meets Blanchard’s falsetto in harmony so close it feels like blood relation, the sort of unspoken bond forged by a long running creative partnership. The same is true of standout Midnight Wine, where it’s difficult to tell them apart as they narrate the down-and-out tale of a terror-soaked loner over pulsating organ and a stomping beat – part murder ballad, part blues howler and part psychedelic daisy chain. Taken together, the music of Year Of The Spider is anything but stuck in the past. Its novel sonic alloys, and punk rock spirit, very much ring of right now.