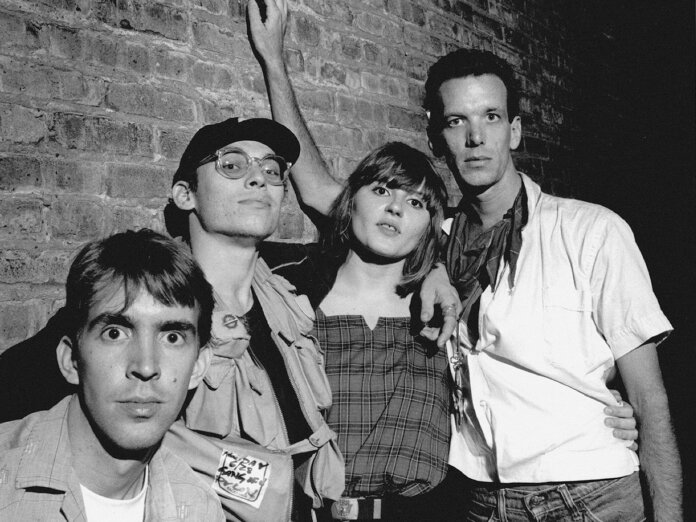 In the 200-page book that comes with this four-LP primer for the band’s original four-year run, many words are used to describe what Pylon did and why that mattered. The most effusive of these are provided by the many luminaries who were awestruck by Pylon’s energy and ingenuity. Jon King of Gang Of Four calls them, “One of the best bands we ever played with.” Hearing their records while in college, Sleater-Kinney’s Carrie Brownstein says, “I couldn’t believe they weren’t the biggest band in the world.” Adds Bill Berry of REM – whose cover of “Crazy” boosted the Pylon cult when it was included on the B-side of “Driver 8” and 1987’s Dead Letter Office – “To this day I haven’t seen a better live band.” And Michael Stipe places his Athens, GA hometown heroes in his personal Top 5.

In just about any other circumstance, the deluge of hosannas might feel a bit much. Indeed, bassist Michael Lachowski admits to Uncut that he initially resisted the idea of including the testimonials, fearing they might conflict with the band’s fundamental modesty and zero-fuss sense of practicality. But it’s forgivable here not just because of the praise warranted by Pylon’s insistently rhythmic, continually surprising post-punk racket – which can sound as thrilling as it surely did 40 years ago – but because of the sardonic humour and endearing humility that were as much a part of their identity as singer Vanessa Briscoe Hay’s growls and hollers or guitarist Randy Bewley’s spidery lines and serrated riffs.

This was not a band that was ever defined by its ambition. Indeed, Pylon’s one brush with the big leagues – opening for U2’s US tour in 1983 – was soon followed by their breakup, the four members having pledged to stop once the fun ran out. (Upon REM’s encouragement, Pylon reformed in 1989 and periodically reactivated until Bewley’s death in 2009. In recent years, Hay has also performed the band’s music in Pylon Reenactment Society.)

Instead, as Stephen Deusner notes in his excellent history in the Pylon Box book, the foursome’s attitude was more accurately captured in a term they coined in an early press release: “Feasible rock.” In other words, they were well aware of their limitations. After all, they were art students who learned to play partially out of a perceived need to fill the gap left in Athens’ music scene when The B-52s departed for New York in 1979. Gradually building up from the original duo of Bewley and Lachowski, they charged forward with heads full of Dadaist and conceptual-art notions and a suitably pragmatic name inspired by the safety cones at the DuPont plant where they worked on weekends. In early songs like “The Human Body”, Pylon can be heard piecing together a vocabulary that they can use to communicate with each other. While initially they may have borrowed bits from favourites in Britain (Buzzcocks, Gang Of Four, XTC, Slits) and on the Bowery (Suicide, Ramones), those unique limitations led them to fashion something that was their own. Born of their outsider sensibility, that lingua franca could eventually be discerned in everything from REM’s “Chronic Town” EP to the dance-punk of DFA Records, which acknowledged that debt when it re-released Pylon’s first two albums on CD.

The chance to hear Pylon develop that peculiar fluency may be the greatest pleasure of Pylon Box, which augments remastered vinyl editions of 1980’s brilliant, acerbic Gyrate and 1983’s fierce, funky Chomp with a wealth of previously unheard music. The greatest revelations lie in the Razz Tape, 13 songs recorded in the band’s first-ever studio session by Chris “Razz” Rasmussen of the Athens record store Chapter III. These embryonic versions of Gyrate songs and others they’d abandon are a testament to the physicality and unpredictability of Pylon’s music even at this early stage. On “Functionality”, Lachowski and drummer Curtis Crowe pound away like a mutant metronome as Hay and Bewley exchange skronks and squawks. Soon to be half of their debut single with “Cool”, “Dub” sees them careen between form and disorder before it all culminates in a collective cry of, “We eat dub for breakfast!”, one of many Hay lyrics that never fail to raise a crooked smile.

Together with the live tracks and demos included on the box’s Extra LP, the Razz Tape provides a vivid sense of Hay as a performer, making the case for her as one of the most exceptional frontwomen of her time and – as Corin Tucker attests – a heroine for the riot grrrl bands to come. In her note, The B-52s’ Kate Pierson fondly recalls the sight and sound of Hay “growling, shouting, squalling, writhing, spitting out esoteric lyrics while spinning wildly across the stage”. That’s the singer you hear in “Danger III”, an unbridled version of Gyrate’s PiL-like meltdown “Danger” recorded at Tyrone’s OC in Athens in 1981.

The Pylon Box is filled with moments that are equally exhilarating; evidently, what was feasible for Pylon was extraordinary by anyone else’s measure.