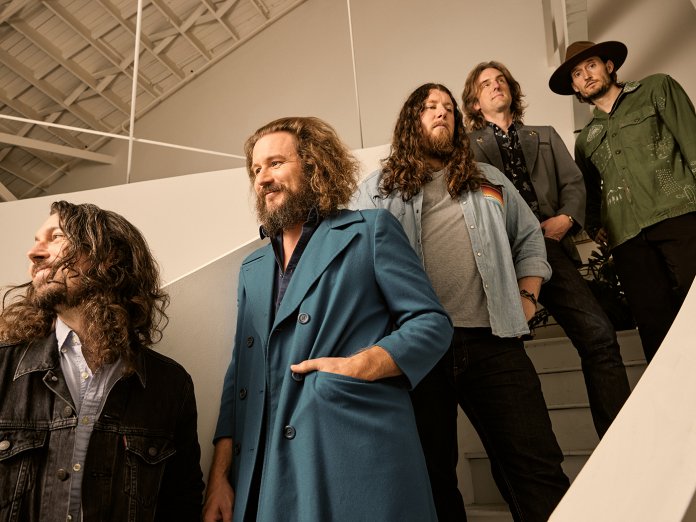 “There is nothing like returning to a place that remains unchanged,” Nelson Mandela wrote in The Long Walk To Freedom, “to find the ways in which you yourself have altered.” My Morning Jacket’s goals were unmistakably less arduous than the freedom fighter’s, but doubtless they, too, encountered comparable sentiments when they reconvened in late 2019 for their first recordings since 2016’s The Waterfall.

Though The Waterfall II, compiled from the same sessions, arrived last year, the band’s future has remained uncertain throughout their hiatus. Jim James has released five solo albums and guitarist Carl Broemel two, while keyboardist Bo Koster was all over Jake Shears’s 2018 debut and also joined Roger Waters’ lengthy Us + Them world tour. Indeed, the entire band, James excepted, has spent time recording or performing with Ray Lamontagne and Strand Of Oaks, suggesting that confidence in MMJ’s long-term prospects were waning. The possibilities, therefore, that their ninth album would tread water or, worse still, sink beneath the weight of expectations, were significant.

Fortunately, My Morning Jacket, its title emphasising its intended definitive status, is frequently thrilling, and its pilfering from America’s classic rock catalogue – including The Allman Brothers, The Doobie Brothers, Creedence Clearwater Revival, The Band and Crazy Horse – is affectionate and celebratory. Like LCD Soundsystem, the quintet has absorbed the goosebumped highlights of their record collection, instinctively – yet crucially, shrewdly – furnishing stirring moments of familiar if not immediately attributable theatre to otherwise surprisingly simple songs. It’s still unambiguously My Morning Jacket, in other words, but revitalised and redeemed.

Opener Regularly Scheduled Programming sets out their stall, offering all the hallmarks of a band who’ve rediscovered how rock music is sometimes more about great chemistry than great songs. Certainly, at its outset they sound at peace. “Diamonds are growing in the garden”, James croons to an organ’s hum and a synthesiser’s gentle pulse, “Raindrops are filling up the sea”. Such Edens rarely last, however. The group flesh out the song’s elemental shape, adding layer upon layer, not to mention Briana Lee’s and Maiya Sykes’s gospel-tinged backing vocals, before Koster’s keyboards muscle up, providing drama for the final, stumbling minute. It’s like deep Southern-fried Spiritualized.

This expansive technique is employed at even greater length on The Devil’s In The Details, built principally around the repetition of two chords just a tone apart stretched out to nine minutes. James’s protracted, sometimes nostalgic reflections upon our complicity in capitalism’s excesses – “Growing up at the mall/Amidst the fruits of slavery” deploys convenient but arguably suitably extravagant hindsight – are largely responsible, but his soulful extemporisations, Blankenship’s restrained rhythm and Koster’s uncoiling keyboard lines are vital accomplices. In fact, it’s a shock to realise less than a third of the song remains by the time Lee and Sykes foreshadow its unexpectedly satisfying, low-key jazz-rock conclusion, completed by Carl Broemel’s switch from guitar to saxophone.

Elsewhere, Love Love Love chugs along on a gritty groove, James’s mouth sticky, relishing some words, spitting others out, and on Penny For Your Thoughts his distorted delivery somehow turns “it all adds up” into et erl ay-ads erp. By Never In The Real World he’s almost gargling syllables, a flurry of organ vibrations and ripped guitars, complete with Thin Lizzy harmonies, tearing things open. Complex also goes for the jugular, opening with Genesis prog before bluntly combining synths veering wildly between Prince and The Who with AC/DC and T.Rex riffage, leaving amps frazzled and James’s voice at its rawest.

If such flamboyance seems implausible, James reminds us pointedly on In Color that there’s “more to life/Than just black and white/So many shades in between”. His pleas for social tolerance are now drenched in sweet reverb, his accompaniment shifting from pastoral optimism to more sinister territory, a key change ushering in an increasingly frantic instrumental safari and Pink Floyd resolution. In fact, only James’s occasionally idealistic sloganeering – like the psych-soft rock “Least Expected’s “Only one Earth/We share it all” – and Lucky To Be Alive’s novelty-song cheer misfire, and even the latter is rescued by crowd-pleasing satire about how “technology came and stole my living”, then sideswiped by another Floyd-esque intervention heralding another mighty climax.

With James overseeing the album’s production and engineering as well as its songwriting, eschewing almost all outside studio assistance, My Morning Jacket is clearly dedicated to reviving two decades of camaraderie, as polished as The Waterfall but, like their live shows, heavier and harder. Older and wiser the band may be, but if they’ve altered otherwise, it appears to have been to everyone’s benefit. A change is as
good as a rest, after all. It seems they’ve exploited both.