Modern Studies – We Are There 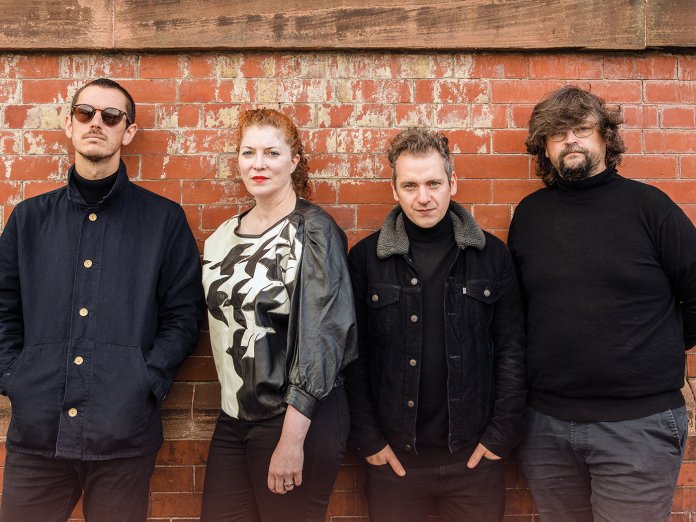 Perhaps it is the awareness, inescapable of late, that life is both precious and fragile, but the fourth album by Modern Studies exhibits a toughening of sinew, a quickening of intent. The sense of urgency marks a small but significant evolution from their last record, The Weight Of The Sun, released in early summer 2020.

Since forming in 2015, the music created by this collaborative quartet has tended towards shiver, shimmer and murmur. Modern Studies blend into an unclassifiable whole elements of hazy, pastoral psych-folk and the slips and sighs of analogue electronica, alongside pickings from krautrock, Brubeckian jazz, blissed-out Cali canyon harmonies and the sweet tang of chamber pop.

Instruments seemingly named after decommissioned weaponry or tools of torture (sub 37, ms10, clock gong, saw) bubble beneath the contrasting voices of the group’s two songwriters, Emily Scott and Rob St John. The former is cool, clear and unsentimental, with echoes of the some of the great English stylists, from Sandy Denny to Jacqui McShee. The latter is rich and deep, near-gothic. Working in tandem, singing over and under each other, the effect is of a stiff, freshening breeze blowing through the embers of a good, strong fire.

All the familiar elements remain on the fourth Modern Studies record, yet they have undergone a spring clean; the cobwebby aura of old meets a more focused quest for direct connection. Opener “Sink Into” begins with an aural sleight of hand that nods towards this shift in priorities: a miasma of ghostly strings quickly dissipates, giving way to a crunchy rhythmic riff. The verses glisten, bursting out, fulfilling the promise in the lyric of the “summer sky that splintered blue”.

Not for the last time, the music edges towards the skew-whiff pop of This Is The Kit. These songs are twisty, awkwardly rhythmic, odd but accessible, featuring thrilling swoops of strings over Pete Harvey’s motoring bass pulse and Joe Smillie’s drums.

The lopsided motifs and leaping time signatures of “Won’t Be Long” recall the Kate Bush of “Suspended In Gaffa” and “Sat In Your Lap”. The influence surfaces again on “Two Swimmers”, where the connection to tidal rhythms and the cycles of sunrise and sunset suggest an affinity with Bush’s Aerial. Beginning with a savage drum tattoo and falling into a kind of campfire chant, the song depicts humanity at one with nature yet lacking a sufficiently sweeping perspective to view the full picture. “You should see yourself”, sings Scott. “Light A Fire” is closer to ’80s Fleetwood Mac and the REM of “Texarkana”, a keening synth line and ringing guitar arpeggios skipping over warm beats, low strings and Scott’s imploration to “let that magic come to me”. “Mothlight”, written by St John, is zonked-out synth-pop, dancefloor-friendly, sleek and slinky.

There are pop songs here, certainly, but a beguiling weirdness remains. The oblique closing track, “Winter Springs”, begins with isolated reverbed piano notes framed by the rock and rattle of found sounds. It feels like a song at sea, a corrupted nursery rhyme, Scott spooked yet elevated: “I feel the child in me”.

Of St John’s two other compositions, “Open Face” is the more gentle, a sad, sighing love song in waltz time. “Wild Ocean”, meanwhile, is an outstanding summation of the expansive psych folk of previous Modern Studies records. Over a drone building from spidery guitar lines and punctuating drum rolls, Scott and St John sing in devotional unison: “All keeps turning…” The dynamics mimic the drift and swell of the sea; near the end, the currents fall still before cresting to a magnificent wave.

Though the range is wider and more varied than before, these songs are bound together by the unifying interplay of voices, instrumentation and, above all, a powerful sense of connection to nature. Modern Studies remain poets of the senses; words such as “selvedge” and “telluric” don’t tend to feature heavily in the standard pop lexicon. We Are There strives to honour the wildness, and childlike wonder, of our existence.

The overarching concern of these 10 tracks is to maintain the bonds of magic and heightened sensory experience through an awareness of our interactions – however fleetingly experienced – with a cosmic vastness. On “Comfort Me”, Scott beckons the land as a lover. The song rides a slow, heavy beat, thick as treacle, guided by doleful piano chords, as the singer chases “some low sound far beyond the edges of the trees”.

It’s as fitting a metaphor for this record as any. Modern Studies are still in pursuit of the unknowable – and the signal is getting stronger.