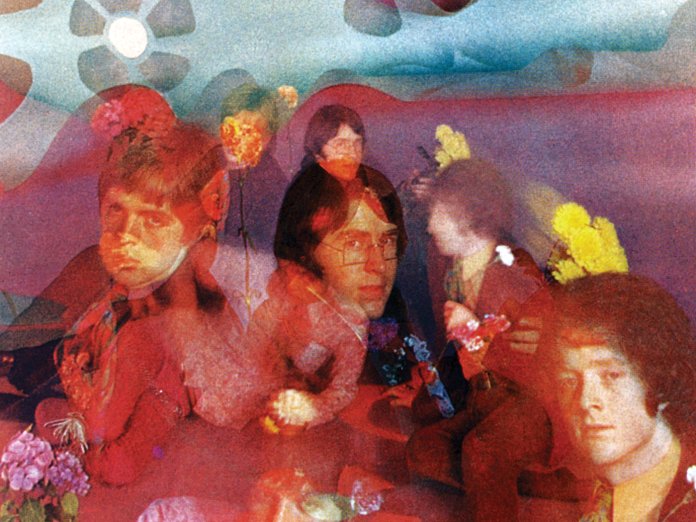 At Blossom Toes’ 1960s pad, a stone’s throw from Chelsea’s Stamford Bridge stadium, things could get pretty lively. “There were people coming and going all of the time,” guitarist Jim Cregan tells Uncut. “You’d go into the kitchen and there would be Eric Clapton hanging out with Stevie Winwood, then you’d have Captain Beefheart on acid in the living room flicking the lights on and off and going, ‘Oh wow!’ Then you’d have our manager Giorgio Gomelsky dropping by with a bunch of German businessmen saying, ‘I want to show you what a hippie house looks like.’ And some girls, I’d imagine.”

Indisputably at the heart of the action in the late 1960s, Blossom Toes played to the hip glitterati at the Scotch Of St James and entertained the fast set during a residency at Paris’s Le Bus Palladium, but their two LPs for Gomelsky’s Marmalade imprint – 1967’s whimsical We Are Ever So Clean and 1969’s more hefty If Only For A Moment – sold poorly. Flush with their successes with the Bee Gees and Bert Kaempfert, Marmalade’s parent label Polydor apparently dismissed Blossom Toes as “dustbin music”. However, if these definitive editions of their albums contain a fair amount of rubbish, they are a thrilling portal into a lost world, and as guitarist Cregan puts it on the Byrds-meets-the-Button-Down-Brass “What Is It For?”: “The mere existence of a door is something to be grateful for”.

Blossom Toes’ roots lay in a north London R&B act, The Ingoes, who included singer Brian Godding and John Entwistle-esque bassist Brian Belshaw. After a spell on the Continent (where they recorded a ludicrous phonetic Italian version of The Beatles’ “Help!” – “Se Non Mi Aiuti Tu” – in 1965), they were picked up by Crawdaddy club scenemaker Gomelsky, who had helped to set The Rolling Stones and The Yardbirds on course to stardom. The Tbilisi-born eccentric then refashioned the band – Cregan was brought in on guitar, and Kevin Westlake on drums – and set them up in their SW6 flat, before giving them their vogue-ish new name and wreaking havoc on their debut LP.

As he peppered the album with intrusive inter-song skits, it’s possible that Gomelsky had a greater vision for We Are Ever So Clean, imagining Blossom Toes as a hybrid of The Goons and The Monkees. Whatever the plan was, it got out of hand; Westlake’s “The Remarkable Saga Of The Frozen Dog” crosses the border from quirky into irritating, while Cregan complained that one of his best songs was warped into a hideous polka by Whitaker for “The Intrepid Balloonist’s Handbook, Volume One”.

However, if We Are Ever So Clean (title lifted from Godding’s Kinks-ish “What On Earth”) veers toward the insufferably twee (“Mrs Murphy’s Budgerigar”, “People Of The Royal Parks”), there are some tremendous songs buried beneath the studio trickery. Godding demonstrates an excitable sideline in mournful Zombies-style balladry on “Love Is” and “Mister Watchmaker”, while Cregan’s “When The Alarm Clock Rings”, Westlake’s “I Will Bring You This And That” and Godding’s “I’ll Be Late For Tea” are perfect exemplars of the Alice In Wonderland school of British psychedelia, mod-ish R&B through a lysergic looking glass. Session musicians were brought in to redo several tracks, much to the band’s annoyance, but some of what seemed like over-fussy production at the time now seems like superb period detail, We Are Ever So Clean anticipating XTC’s Dukes Of Stratosphear psychedelic pastiche 20 years before its time.

“Really you’re going ever so high, Felicity”, someone twitters on the outro to “The Intrepid Balloonist’s Handbook, Volume One”. “We’re never going to reach you now”. As a commercial proposition, We Are Ever So Clean was certainly way too far out. With times moving fast, Westlake bowed out to be replaced by John ‘Poli’ Palmer and then Barry Reeves, and Godding and Cregan sought to declutter their sound. A couple of non-LP singles – a Lovin’ Spoonful-esque take of Bob Dylan’s “I’ll Be Your Baby Tonight” and the Thunderclap Newman-ish “Postcard” – marked a shift in emphasis before Blossom Toes asserted creative control over their second album.

From the glowering opener, “Peace Loving Man”, If Only For A Moment is very clearly a different proposition, Blossom Toes finding some of the alpha-male thud of Cream or Black Sabbath. It’s a thunderous countercultural jumble of discordant guitars, Belshaw’s proto-black metal growls and World War III paranoia, a sinister Pink Floyd whisper asking: “Do you want to be part of this confusion for the rest of your time? Do you?”

Hemmed in on their first record, Blossom Toes stretch out a little more, Godding and Cregan’s twin-guitar assault on “Indian Summer” pre-empting Wishbone Ash. The mood has shifted too, the Lewis Carroll winsomeness giving way to the more antagonistic tone of freakier times. They call out the baddie US cops on “Billy Boo The Gunman” and even their plea for peace on “Love Bomb” comes with a hint of Taxi Driver street-cleaning menace, Godding’s “hundred per cent gold-plated purified love bomb” perhaps not dissimilar to the kind of devices the Baader-Meinhof Gang and the Angry Brigade would be planting in the years ahead. Shawn Phillips’ sitar tinsel on their version of Richie Havens’ “Just Above My Hobby Horse’s Head” harks back to less militant times, but if Cregan talks positive on the closing “Wait A Minute” (“I see no reason for our parting”), Blossom Toes’ time was not long.

The band never got back on the road after being shaken up by a car crash on the way back from a gig in Bristol. Godding and Belshaw reunited with Westlake to form a new band, B B Blunder, who released a lone album for United Artists in 1971, while Cregan went to work with two-thirds of Taste in Stud, before finding more tangible success as a sideman for Steve Harley and then Rod Stewart.

However, if Blossom Toes’ commercial failure was absolute, and their lasting influence negligible, they buried a fabulous time capsule with these recordings. They expanded their range to explore the possibilities that The Beatles had opened up, then self-destructed as the mood turned darker. For a couple of years, though, they had quite the party. You had to be there, and now you are.