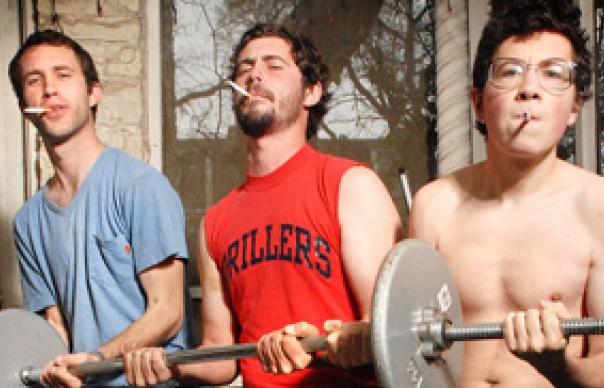 Austin three-piece White Denim continue to make a case for the guitar-bass-drums trinity as rock’s holiest formation. They may not boast the sheer virtuosity of the Jimi Hendrix Experience – even if drummer Josh Block would probably give Mitch Mitchell a run for his money – but they do possess the telepathic rapport, economy and howling intensity of all the best rock threesomes.

Bizarrely, this decade’s garage rock revival has given us more great duos than trios, but even Jack White realised you can only do so much without a bassist, hence The Raconteurs. On the other hand, it’s hard to imagine White Denim having the same streamlined potency as a four-piece. Three is undoubtedly the magic number here.

Nominally White Denim are still a garage rock band but the joy of Fits is in the way they audaciously chance their arm at numerous other genres: prog, psychedelia, post-punk, country pop and even tropicália. There’s a thrilling discrepancy between their circumstances – they still record in Block’s caravan – and their ambition.

You might have assumed that the gleeful bedlam of last year’s debut Workout Holiday was a happy accident, a result of staggered sessions and the fact that the album was essentially two EPs bolted together. But Fits was conceived as a singular entity, and if anything it’s even more gloriously schizophrenic and extreme then their debut. As the band put it, dryly: “Less medium to medium-hard songs and more songs that are medium-soft or hard-hard.”

The hard-hard songs come first. “Radio Milk/How Can You Stand It” is a rampageous double-header, picking up the Minutemen math-punk thread that Workout Holiday left dangling. Three more songs stampede past with pulverising drums, screaming MC5 guitars and howled vocal hooks (occasionally in Spanish). Single “I Start To Run” is just as catchy as “Let’s Talk About It” but also faintly, mischievously wrong. It’s too fast, perhaps: Steve Terebecki’s punk-funk bassline left panting in pursuit of the breakneck beat.

On the moody instrumental “Sex Prayer”, off go the fuzzboxes and in come organs. It’s like a Krautrock Soft Machine. “Mirrored And Reversed” prolongs the deep psych vibes, layering spectral vocals over a rhythm that could be classed motorik if the autobahn was bumper-to-bumper with hay trucks.

Then, a real switcheroo. White Denim ask you to imagine turning the record over after the end of Track 7 to discover their mellow side. “Paint Yourself” is a downy country-funk caress, with singer James Petralli imagining he’s Devendra Banhart piloting Little Feat. “I’d Have It Just The Way We Were” adds a bossa nova woodblock to complement Petralli’s sunkissed crooning.

Lovelier still, there’s “Regina Holding Hands”, the best straight-up song White Denim have written so far. An obvious but clearly heartfelt tribute to Shuggie Otis’ Inspiration Information, the chorus snatches your breath in the same way as Hall & Oates’ “She’s Gone” before submitting to the freewheeling groove. A more pragmatic band would have milked this, but with three-and-half-minutes representing an epic for White Denim, they’re already into the untypically bashful final track, “Syncn”, whose dusted drums and open arpeggios make you want to press play and listen again from the top.

It’s a rare pleasure to hear a band so at ease with themselves, playing with no obvious aim or agenda beyond having a good time and hoping you do, too. The best thing about Fits is imagining how incredible these songs will be when played live. See you down the front.

It’s actually 40-foot long. You’d have to have a pretty large truck to haul it anywhere. It does limit the range of sounds you can get compared to a conventional studio, so a lot of creative work goes into the engineering of the music. It makes us more resourceful. To get some of the vocal and guitar sounds we’d face our amps up against the washing machine or this big washtub that Josh has. There are a lot of household objects on the recording!

Was it a ploy to contrast Fits’ fast and hard first half with its mellower second part?

Yeah, we saw a pretty clear division emerging in the songs we were recording for this album. So from that came the idea to sequence it like an LP with a 30-second pause in the middle where you could imagine getting up to flip the record over.

Did any particular music have a direct influence on Fits?

The first three Funkadelic records were an important reference point. And SF Sorrow by The Pretty Things.

Is there anywhere you wouldn’t go musically?

I don’t think so. Josh had the idea of getting on this swingbeat, Bobby Brown kind of thing. It was sounding a little too campy but we wouldn’t rule it out in future. We don’t rule anything out.