Album Reissues: The Buzzcocks – Another Music In A Different Kitchen 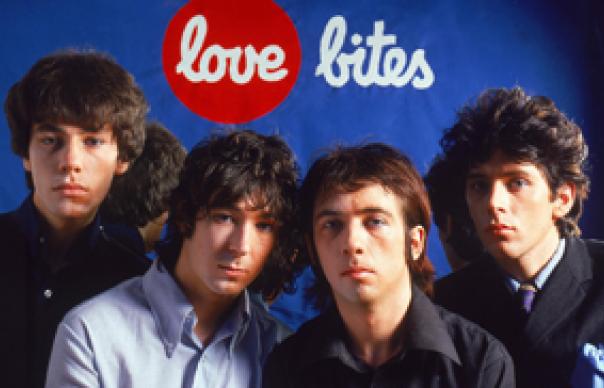 Hard-nosed punk historians have always been very sniffy about 1978. God, no, not that frightful year when punk “went mainstream” and “became new wave”. But people who grew up in that period are more likely to remember ’78 as a boom time, a fast-changing spring-summer-autumn when seven-inch vinyl came in Opal Fruit colours, and new singles were new songs, not album tracks.

The Buzzcocks could be the definitive ’78 band. A cognoscenti name-to-drop in January, they were a breakout success by March, and a ubiquitous sight in the Top 20 by November. They released five singles that year, and two albums, almost all written by singer/guitarist Pete Shelley. Together with the early Ramones records, the Buzzcocks’ output set the benchmark for two-minute punky-pop statements, exerting far-reaching influence on C86, Elastica, Green Day and countless others.

The warmth of Shelley’s personality – an effeminate fusspot with a high-pitched Bolton accent – was far more radical in the context of punk than Howard Devoto’s icy, arty stick-insect. When Shelley became the frontman after Devoto’s departure in 1977, Britain as a nation was scarcely prepared for him. It was love at first sight. When he sings, “Ooh, they make me dizz-eh!” in “Fast Cars”, he sounds like Bubble in Absolutely Fabulous struggling to comprehend the New Year.

Another Music In A Different Kitchen (1978), first of three Buzzcocks albums to be reissued here in 2CD editions, was a frenetic, anxious psychodrama about modern life, relationships and sex (“… all this slurping and sucking”), produced so brilliantly by Martin Rushent that nobody, including the Buzzcocks, has ever created anything remotely like it. Massive emphasis was placed on the guitars of Shelley and Steve Diggle, which razored and chopped like no guitars in history, but another important factor was the drumming of John Maher, whose super-quick hands detonated multiple explosions of snare and hi-hat.

These new editions, which contain around 30 (!) extra tracks each, aren’t always riveting, but they certainly allow us to hear the Buzzcocks in several contexts. The reverberating hugeness of AMIADK can be contrasted with the band’s tinny, distorted demoes, and then with their agitated performance at Manchester’s Electric Circus in October 1977. (Shelley dodges the phlegm in “Boredom”: “I’ve taken this extravagant journey, so it seems to me, fuck off!”) The inclusion of contemporary Peel sessions even provides a fourth context in which to assimilate the songs.

This becomes a bit of a problem with Love Bites. All punk bands except Wire faltered on their second albums, but I must say I’d never realised quite how poor Love Bites is. It sounds painfully exposed now: sluggish, thin, badly sequenced (“Real World” is a lousy opener), with Shelley in an airing cupboard somewhere, jarringly disconnected from the backing tracks. Those who disagree will welcome its reissue, which adds the singles “Love You More” and “Promises” (plus B-sides and Peel recordings) to the first disc, then fills up the second with 13 demoes and 30 minutes of previously unreleased live material from the Lesser Free Trade Hall (July 1978). Sorry to be revisionist, but even with 45 tracks (!!), Love Bites is one timeless single (“Ever Fallen In Love…”) misguidedly afforded the status of a greatest hits package.

The Buzzcocks didn’t lose any commercial headway with Love Bites, but they did with the next one. A Different Kind Of Tension, notable for Steve Diggle’s increased role as a writer/singer, is loosely divided into a ‘punk’ half and an ‘experimental’ one. It marks the change from ’78 to the new, wiry, angular sounds of ’79 (which are ideal for Shelley’s lyrics about being a cipher in a consumerist world), and it makes perfect aesthetic sense if you play it next to, say, XTC’s Drums And Wires or Gang Of Four’s Entertainment!. But the Buzzcocks were judged on their singles in ’79 (“Everybody’s Happy Nowadays”, “Harmony In My Head”) and the judgment, strangely, was negative. Did two-guitar line-ups seem old-hat by then? Did too much Diggle confuse the picture? Either way, the Buzzcocks were forgotten by 1980.

Disc two of ADKOT adds three non-charting singles from that year (be warned: their Martin Hannett productions have dated alarmingly), plus the inevitable demoes and Peel sessions, to form a 38-track document of the Buzzcocks’ 1979-80 fall from grace. “Everybody’s Happy Nowadays” and “Harmony In My Head”, meanwhile, are now rightly acknowledged as classics.

It must have been amazing to be a Buzzcock in 1978.

“You look back and you think, My God, did we do all that? We even did a lot of touring as well. But to record an album in those days took a month. It was before Fleetwood Mac raised the bar high. It wasn’t an Olympic sport at that point.”

Were there times during 1978 when you felt infallible?

“Yes… matched by the times when I felt vulnerable and insecure. Two years before, we’d been doing music that we thought nobody could possibly like. It was meant to be the most uncommercial form of music ever heard. Things like ‘Orgasm Addict’, you know?”

Jon Savage, in his sleevenotes, recalls that “Everybody’s Happy Nowadays” was the point when the public began doubting the Buzzcocks.

“I don’t know whether it precipitated things, or whether it was the barometer (laughs). It’s good to look back on that song and see it as something which stands alone, and doesn’t have any emotional turmoil or baggage. Then we put out ‘Harmony In My Head’, and somebody in Sounds wrote: ‘Shelley’s voice has hardened.’ People didn’t like it at the time, but Buzzcocks was never set out to be one person’s dream. The whole thing of punk was about empowerment, rather than the Tin Pan Alley thing of making a star out of the prettiest one.”