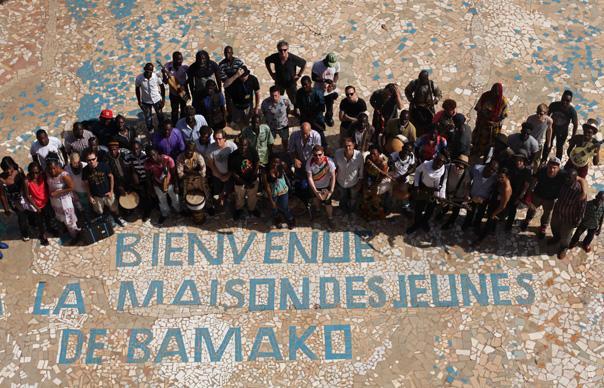 The world at large may be more eager for news of a new Blur album, but for the last seven years, Damon Albarn’s attention has been fixed on a more distant horizon. Since 2006, the Blur frontman has been one of the main ringleaders of Africa Express, a cultural exchange project porting western musicians – themselves a diverse bunch including Paul McCartney, Fatboy Slim, and Flea of Red Hot Chili Peppers – out to locations such as Mali, Nigeria and the Congo in the name of musical alliance.

Some care has evidently been taken to ensure Africa Express smacks neither of Live Aid showboating or Graceland-style cultural imperialism, as the consequent tours have played up the project’s democratic presentation and egalitarian participation. Take last year’s flagship event, a pan-ethnic group of musicians chugging out of London Euston in a sort of Magical Mystery train, bringing their improvised and collaborative pieces to schools and factories, trade clubs and music venues of the United Kingdom.

The 11 tracks of Maison Des Jeunes constitute the highlights of a week spent in the Malian capital of Bamako, with visiting western musicians – an assortment including Albarn, Brian Eno, Yeah Yeah Yeah’s Nick Zinner, UK producers Two Inch Punch and Lil Silva, rapper Ghostpoet and members of Metronomy and Django Django – rubbing shoulders with local musicians in the titular youth club, sat on the banks of the Niger river.

Mali, of course, has a rich musical tradition, home to the late guitarist Ali Farke Touré, desert blues group Tinariwen, and a cradle of the griot song-storytelling tradition. But the choice of location, you suspect, is also an artistic commentary on a political situation. Warfare continues to rage in northern Mali, where some areas remain under the control of Islamist militants, and armed groups such as Ansar Dine (“Followers Of The Faith”) threaten musicians with a public whipping, or worse. An early album highlight comes as Songhoy Blues, a Timbuktu group formed in response to the jihadi occupation, lock guitars with Zinner on “Soubour” (“Patience”), a thorny desert blues stomp with a firm, upright backbone.

Deference, generally, is paid to the Malian contingent. Albarn sensitively produces a handful of tracks, letting the raw vocal soul of Bijou’s “Dougoudé Sarraf” and the weaving ngoni blues of Gambari’s “Yamore” (vocaled by Kankou Kouyaté, 21-year-old niece of Bassekou Kouyaté) shine through. Eno, too, is here in the guise of dutiful documentarian, not egghead remixer, and the two tracks that bear his involvement – Yacouba Sissoko Band’s “Chanson Denko Tapestry” and Tiemoko Sogodogo’s  “Latégué” – show off the flexibility of Malian song; the first an itchily danceable number with the faint vibe of a kora “Duelling Banjos”, the latter a wise griot lament suffused with sublime longing.

Elsewhere, some of the younger members of the company set about a danceable sort of soundclash. Lil Silva, notionally known for his funky take on UK urban music, is behind the enjoyable “Bouramsy”, an organic-sounding rattle of hand percussion, flute-like melodies and lightly ecstatic synth swells that sounds like a Congotronics street performance retooled for the dancefloor. On “Deni Kelen Be Koko”, David Maclean of Scottish Beta Band-a-likes Django Django mixes musicians formerly associated with the late ‘Bambara bluesman’ into an insistent groove of loping bass and slippery snares by, while Two Inch Punch takes Malian rapper Talbi’s “Rapou Kanou” and retools it in jazzy fashion with a clutch of local instrumentation as his sound source.

A glimpse of the social side of the project comes on “Season Change”, sloth-voiced Coventry MC Ghostpoet relating a smoked-out tale of late nights, strong drinks and late-night Mahjongg games that nonetheless cracks with melancholy. “All cried out but I’m shedding a tear/Why won’t the seasons change?” he pleads, backed by soft Albarn sighs, before Bamako’s talking drum band Doucoura beat the track to a hectic end.

Maison Des Jeunes is the sort of project that will probably please neither world music aficionados of a purist stripe, nor those holding out for Damon to make another Parklife. But as a collection of friendly collisions, an impulsive document of how music can bring people together over musical and cultural boundaries, it’s well worth the visit.
Louis Pattison