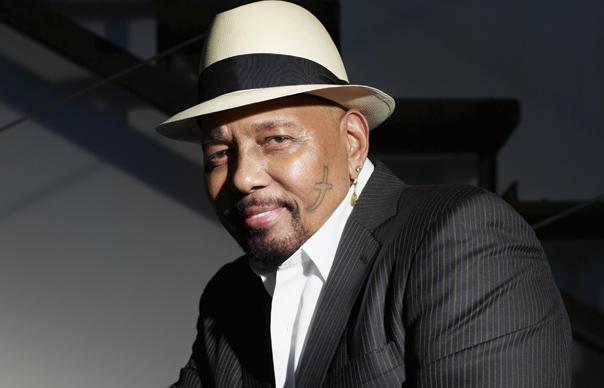 The old adage about music offering a route out of poverty was never truer than for Aaron Neville. As a kid living on the breadline in 1950s New Orleans, Neville lived for music – he was in a group with his brothers at 15 – listening with particular obsession to the vocal harmony groups of New York, Chicago and other Northern cities.

Though Neville is properly considered a ‘soul’ singer, something of doo-wop’s purring harmonies and tear-stained romanticism fed into his own music. “Tell It Like It Is”, his breakthrough hit from 1967, is a sobber redolent of doo-wop’s golden age, with Neville switching between tenor and falsetto in what would prove trademark style.

After a career singing Crescent City funk and soul, dipping into gospel, country and MOR, at 71 Neville has turned back to the sounds that first shaped him, with help from assorted friends. Don Was, installed this year as President of Blue Note Records with a mission to regenerate the hallowed label, handed him a contract and his production talents, while Keith Richards brought his guitar skills to a band of stalwarts that included a quartet of backing singers drawn from original doo-wop groups like The Teenagers and the Del Vikings.

The result, according to Richards, was “a dream session” that romped through a couple of dozen classic songs from the 1950s and early ‘60s – “the doo wop era” as Neville calls it, though numbers like “Work With Me Annie” belong as much to Rhythm and Blues. What’s in a genre? “Money Honey” has been variously delivered as R&B and rock and roll, by Clyde McPhatter (originally), Elvis Presley and Ry Cooder among others. The version that opens proceedings here has an easy swing that echoes its 1953 nascence, though Richards’ chops and solo bear a distinct Chuck Berry accent.

Keith doesn’t have too many other standout moments, though as de facto bandleader his clipped chords and codas are always high in the mix. Everyone on board knows how this stuff should sound, and the playing is restrained but confident, while the Was production is clear but unglossed, in keeping with the era of mono vinyl. Neville sings everything with utter authenticity, and in his advancing years his voice retains its distinctive timbre and quaver.

He shines brightest on the slower material. He wrings every drop of heartache from the Jive Five’s “My True Story”, climbing easily into its unearthly falsetto reaches for the ‘Cry Cry Cry’ hook originally sung by Eugene Pitt, who is one of the quartet of backing voices here. One can only imagine what Pitt felt as he heard Neville voice a song he wrote as a Brooklyn teenager in 1961.

Neville was eleven years old when The Clovers’ “Ting A Ling” hit number one on the R&B charts (Buddy Holly, who gave the song a rockabilly makeover, was 15). By comparison to the intricate, semi-acoustic Clovers side, Neville’s update is muscular, though it preserves the chattering piano and smoky sax parts.
The original records inevitably cast a long shadow over some of the remakes here. However sweetly Neville sings The Drifters’ “This Magic Moment” one misses Lieber/Stoller’s orchestral pomp, and The Crystals “Be My Baby” is likewise too defined by Phil Spector’s shimmering production to really work as a small group piece.

Yet mostly, Was, Neville and band deliver on their own terms. The Impressions’ “Gypsy Woman”, Little Anthony’s “Tears On My Pillow”, and Jesse Belvin’s “Goodnight My Love” sweep by slowly and tenderly. On the uptempo side Thurston Harris “Little Bitty Pretty One”, The Drifters’ “Ruby Baby” and Hank Ballard’s “Work With Me Annie” are despatched with vigour, handclaps and storming massed vocals. The object of My True Story was clearly not to reproduce the originals – the band are too knowing and nuanced for a 1950s R&B outfit, Neville’s vocals too engrained by experience – but the album captures the spirit that first drew them and countless others to the flame.
Neil Spencer

Q & A
AARON NEVILLE
Where was the teenage Aaron and what was he wearing, when listening to the originals?
I was living in the Calliope project, New Orleans, wearing jeans and t-shirt. The music of the Clovers and Spaniels and the rest was like candy to me, I couldn’t get enough, my teachers probably thought I had attention deficit disorder.

You have worked with Keith and Don Was in the past….
The Neville Brothers supported the Stones back in the 1980s, and I knew Don from Was Not Was. We did “I Fall To Pieces” with Trisha Yearwoood, which won a Grammy, and I sang “Crazy Love” for the Phenomenon Soundtrack that he produced.

The sessions sounded a lot of fun. Were they?
You can hear the band smiling on the record. We did the whole thing in about five days, went in with 12 songs in mind and cut 23. This is just the start, there is going to be Doo-Wop parts 2, 3 and 4!

St Jude is very important to you. How come?
My mother turned me onto St Jude back in the days when I was wild and crazy. She took me to the shrine on Rampart Street. I think St Jude helped me achieve some miracles in my life – that’s why I wear the medallion in my left ear and never take it out.
INTERVIEW: NEIL SPENCER