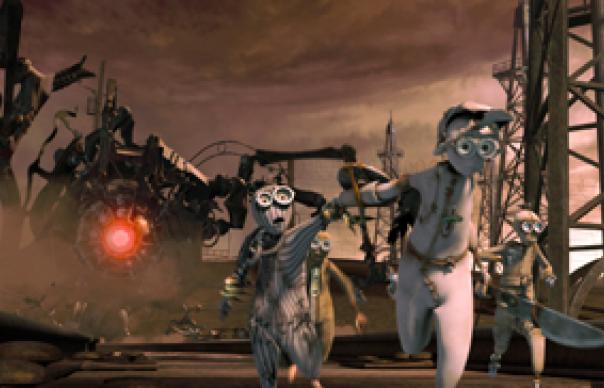 
In 2009, animation seems finally to have moved away from a gentle, Disneyfied world into more mature territories. Coraline, in May, was a chilling children’s fairy tale that admirably refused to sugar coat its subtexts of child abduction and obsessive maternal love. More recently, Wes Anderson’s treatment of The Fantastic Mr Fox had arguably more in common stylistically and thematically with his own films than Roald Dahl’s short story.

Which brings us to 9 – animated sci-fi produced by Tim Burton and Night Watch’s Timor Bekmambetov. Set in a post-apocalyptic world where humanity had been destroyed by hostile dieselpunk machines, 9 concerns the fight for survival of a number of cutesie sentient sack puppets.

In many ways, 9 is a strange film. On one hand, the post-apocalyptic setting and series of machines are enough to give children proper nightmares for weeks; indeed, the British Board of Film Classification have granted the movie a 12A for “moderate sustained threat”. But our heroic sack puppets are clearly crying out for third-party merchandise opportunities in fast food franchises up and down the land. Awww, they so cute! Imagine the toys from Play School wandering by mistake into the ravaged future earth of The Terminator movies and you’ve there.

Still the film itself is visually impressive – you can, perhaps, detect Burton and Bekmambetov’s influence in the eldritchian landscape and twisted dieselpunk designs. When the big reveal comes explaining how the machines took over, I did get a sense that a very heavy message was being delivered with a very large trowel. That said, it was pretty exciting in its Sturm-und-Drang. And, aww, really, the little sack puppets really were the cutest poppets.