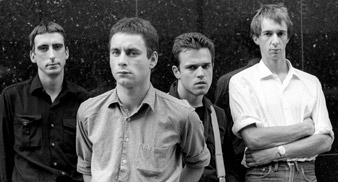 The new album sees a return to the core writing partnership responsible for the seminal 1977 release, “Pink Flag” and is due to go on sale later this year.

Speaking exclusively to Uncut.co.uk, Wire’s Colin Newman the new album is “part of an arc of work begun in 2006” is very different to their previous studio offering.

Newman says: With Wire people normally expect the unexpected 🙂 You can surmise from that information that this is very different to the last album “Send”. Obviously people will have their own take on “Object 47” but I’m very excited about how this one will be received. I think it’s a very confident statement about where Wire is right now! My gut feeling is that Wire fans are going to like it a lot.

He adds: “Object 47” was produced in the same way that all pinkflag studio releases are produced. Assembled “In house” in my studio (see www.colinewman.com/studio.html for a list of all productions that have passed through this studio) neither Wire or myself have used an outside producer in years!

A track from the album will soon be available to download, check back to www.uncut.co.uk for details.

The full Object 47 tracklisting is:

One Of Us
Circumspect
Mekon Headman
Perspex Icon
Four Long Years
Hard Currency
Patient Flees
Are You Ready?
All Fours

The band are also about to embark on a European tour with a confirmed UK date at Manchester’s Futuresonic Festival on May 3 and news of a London show expected to be confirmed soon.

The full Wire tour dates are: