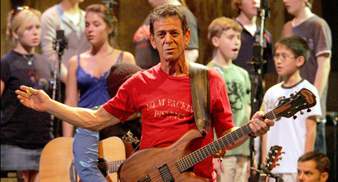 As previously reported here on uncut.co.uk, Lou Reed is bringing his Berlin tour back to Europe for a further twenty shows next month.

As part of his AEG promoted European tour, Reed will be performing the controversial 1973 album in its entirety at three venues in the UK, the Edinburgh Playhouse on June 25, Nottingham Opera House on June 26 and London’s Royal Albert Hall on June 30.

As with the two UK shows last year, he will again be performing with a 30-piece ensemble, including his regular touring band, a string and horn section and a children’s choir.

Uncut has three pairs of tickets for Reed’s Nottingham Opera House on June 26 and three pairs for the London Royal Albert Hall show to giveaway.

To be in with a chance of winning, simply log in and answer the simple question by clicking here.

This competition closes on Friday June 20. Please supply your daytime phone/ email contact details and specify whether you would like to attend the Nottingham or London dates.

The full Berlin 2008 European dates are: