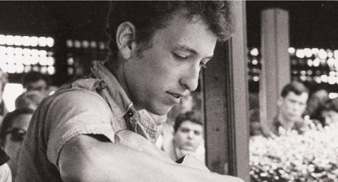 As previously reported, the first ever DVD of Bob Dylan‘s performances at The Newport Folk Festival is to be released at the end of the month.

Featuring 80 minutes of previously unseen footage, the film by Murray Lerner chronicles Dylan’s transformation in successive years from ’63 to ’65.

The BBC, Columbia and British Film Institute are hosting a world premiere gala screening next Tuesday (October 9) at the BFI Southbank (formerly the NFT) – and Uncut.co.uk has got three pairs of tickets to giveaway!

The screening, which starts at 6.30pm will be followed by a Q&A with Murray Lerner.

To be in with a chance of winning, simply go to the competition here.

Competition closes at noon on Monday (October 8) – winners will be contacted from Monday afternoon. Please include your daytime contact number and email where possible.

More details are available from www.bfi.org.uk.