Win! The Wire On DVD! 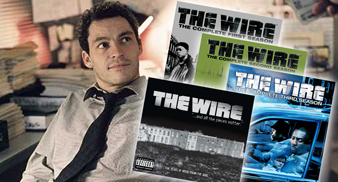 Win the first three seasons of The Wire!

Music from critically acclaimed cult HBO crime drama The Wire is to get a UK release on January 21, so courstesy of HBO Video, and Nonesuch records, uncut.co.uk is giving away a set of the first three seasons of the David Simon created show, along with a copy of ‘The Wire: “…and all the pieces matter.” – Five Years Of Music From The Wire’.

Click here for the full tracklisting of the soundtrack.

Season four will be released on DVD boxset on March 10.
With Season five premiering on the FX channel in the UK shortly afterwards.

Check out the official website of The Wire www.hbo.com/thewire, by clicking here.

To win The Wire package, simply answer the question by clicking HERE.

Competition closes on February 8, 2008. Winners will be announced here on the site.