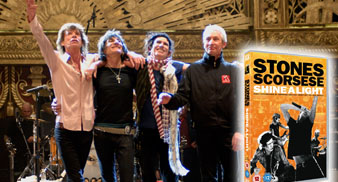 uncut.co.uk has teamed up with Twentieth Century Fox Home Entertainment to offer the chance to win a copy of The Rolling Stones film Shine A Light!

The film, which was released earlier this year, from Oscar-winning director Martin Scorsese will be available to buy on DVD and Blu-Ray from November 3 – and we have 3 copies of the DVD to giveaway right now!

All versions of the film which was recorded over two nights at New York’s Beacon Theater in 2006 come with bonus features: including four songs (Undercover of The Night, Little T & A, I’m Free and Paint It Black) which weren’t in the cinema release as well a ‘behind the scenes’ featurette and archive footage.

To be in with a chance of winnning one of three copies of Shine A Light on DVD, simply log in and answer the question here