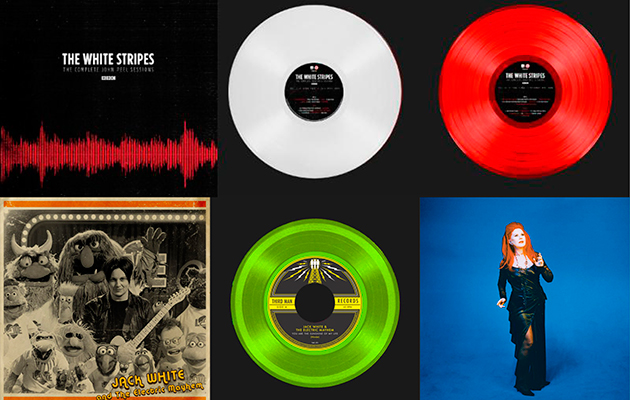 Among them are rarities from The White Stripes and Jack White.

The White Stripes‘ Peel Sessions will receive their first official release on two albums, one red and one vinyl. The band’s two sessions for John Peel took place in 2001. A standard black vinyl version of this release will be available later this year.

Jack White, meanwhile, will release a limited edition green vinyl 7″ of Stevie Wonder’s “You Are The Sunshine Of My Life“. This single includes White’s cover from his appearance on their show earlier this Spring with the Muppets house band, The Electric Mayhem, on the a-side, plus the special TV rendition, featuring the rest of the Muppets singing along, as the b-side.

Also for Record Store Day, B52 vocalist Kate Pierson releases “Venus” b/w “Radio in Bed” in the Blue Series 7″. Both tracks are produced by Jack White.

Other artists who will have releases on Record Store Day include David Bowie, Bob Dylan and Patti Smith.

A trio of Bowie releases include a picture disc of the 1970 album The Man Who Sold The World, a picture-disc seven-inch of “TVC15” and a 12-inch EP, “I Dig Everything“, compiling six tracks Bowie recorded and released as three different singles for Pye in 1966.

Record Store Day will take place on 16 April 2016. You can find the full releases for the UK here and America by clicking here.